For those that have followed the blog for a long time know about my predilection for the Ruger 10/22.

After getting my first 10/22, I started collecting parts, including a bunch of factory stocks....then I stumbled onto some threads on Rimfire Central and the hook was set...I have now built 13 custom 10/22s and have more in the works. The links I provide will take you to the last post of the build, which will have links to all the previous posts.

We'll start with the one. This project started when I found an SR22 chassis at a gun show for just $60.

The first iteration used a parkerized Kingston Armory steel receiver and a cut down (16") barrel.

I had wanted to build some sort of Zombie Hunter themed rifle for a while, but hadn't got around to it. I originally wanted to incorporate some Lichtenburg wood burning into the stock (lighting burns using high voltage electricity), but after two failures with transformers, I gave up and went with some hand cut engraving in the stock (filled with glow in the dark paint and clear epoxy) and some neon green dye.

I used the Kingston Armory parkerized receiver, a used barrel and a bunch of "tacticool" parts I had in my 10/22 parts bin. See the last post of the build here.

Back in August of last year, I posted this project. It all started with a factory walnut stock that I got in trade (sort of). Someone had modified it, then painted it, then sanded on it some more.

I decided to try and make something out of it and I figured I would make it a tribute to the Finger Groove Sporter model. I added the finger grooves to the forend, shaped the wrist and butt stock, added flutes and a grip cap, then had a factory aluminum trigger housing and butt plate Cerakoted. The receiver was another Kingston Armory steel receiver that along with the factory barrel were polished to 5000 grit and reblued. See the last post of the build here.

Last March I posted the 10/22 Continental Project, basically my version of the 10/22 International. The gun used a new take-off walnut Mannlicher stock, a new barrel and steel Kingston Armory receiver, both polished to a 5000 grit finish. Then I added a new Pike Arms aluminum anodized trigger housing and trigger. The result is one of the prettiest 10/22s you may ever see.

This next one is another project that started with a stock. While looking for deals at the Packwood Swap Meet, I came across this stock. It was a factory Ruger 10/22 Finger Groove Sporter stock and the price was just $55. Naturally I bought it...

I first built it with one of the Kingston Armory steel receivers and a new take-off barrel. Much like the Continental Project above.

Then I found a period correct barrel and aluminum trigger housing, both in good original condition. The receiver is a later factory one, I am still looking for a 1966-1970 vintage receiver....anyway here is what it looks like now, see the last post of this build here.

I needed a home for the receiver and barrel I removed from the FGS project above, I found this factory walnut Sporter stock on ebay for a reasonable price and assembled it from the parts removed from the FGS stock, but I noticed the fit was not so great, so I plan on bedding the action and barrel, look for more details on this later.

This project was inspired by the work of another 10/22 owner. He build this SBR 10/22 stock from just wood. 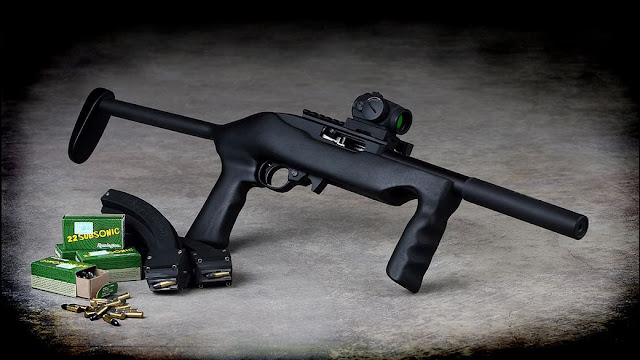 I wanted to do the same, but the project evolved and I got to try some different things on this project. The result is below....not exactly pretty, but it definitely looks different. I called it the LTR project following Ruger's nomenclature...it stands for Lightweight Tactical Rifle...see the last post of this build here.

I have cannibalized this rifle for parts to build others. I still have the stock though.

I built this rifle with the help of my local forum members, we raffled it off to raise money for the forum. The basis for the rifle is a factory walnut stock, a new take-off receiver that was engraved with the WaGuns logo and a new take-off barrel that was polished to a high shine then reblued.

No updates, I turned it over to the new owner once it was finished. See the last post of this build here.

Yet another gun that was inspired by others, a guy that goes by the name of "Hipshot" on the Rimfire Central forums built one of these tactical rifles from a factory birch/beech stock, and it inspired me to build one of my own.

I started with a standard beech wood stock, some pieces of wood from the hardware store and followed his instructions on how he built his. Below is the result....

I have also cannibalized this rifle for other builds, but still have the stock. see the last post of the build here.

Hipshot was also the inspiration for this next rifle, it is a tribute to the late 1800 "Calvary Carbines" like the Spencer, Springfield and Sharp's rifle.

I changed the grip into a straight grip, cut down the forend, then inletted a saddle ring and military sling mounts. The last post on this build can be found here.

I wasn't happy with the sling, it was a 1" and the sling swivels were 1.5", so I made a new sling from an old leather belt. I also blued the bolt and swapped out the rear sight for a William Peep sans the picatinny rail. 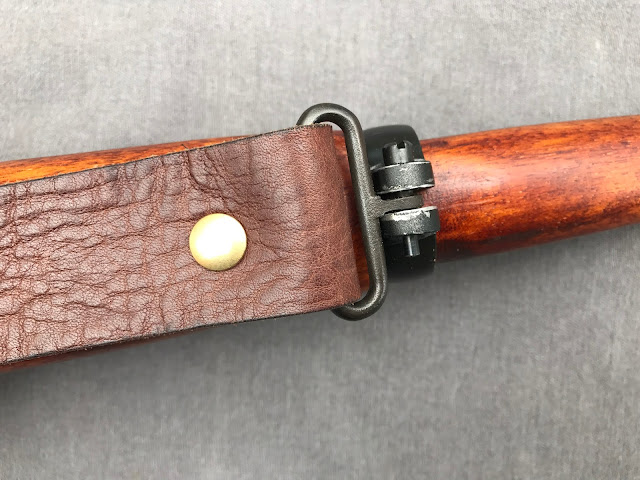 Then later I added a custom brass charging handle extension. 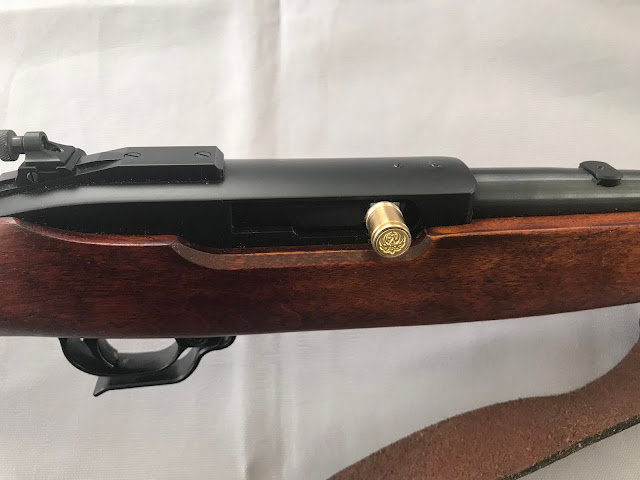 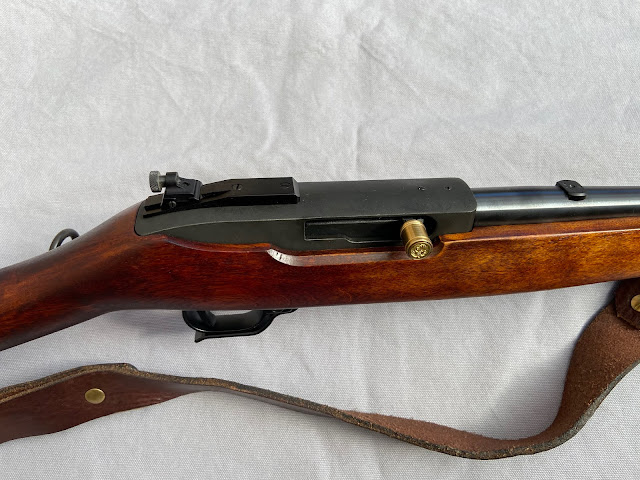 This build was also partly inspired by Hipshot. I wanted to build a custom thumbhole target stock from a factory birch/beech wood stock. I decided to go with pearl white and a polished receiver and stainless barrel, I really like the way it turned out. See this build here.

One of my early projects was to build a lightweight pink stock for my daughter's 10/22. I opened up the butt stock and stained it in a pink/fuchsia color. See this build here.

She decided she would rather have the factory pink laminated stock, even though the LOP was a bit long for her.

The magazine above was a black Butler Creek steel lips one that I painted with pink glitter paint...I tried my hand at dying a factory clear BX-1 magazine and then I found a few clear B/C mags and painted them in translucent pink R/C paint. I also found a deal on a pink charging handle. 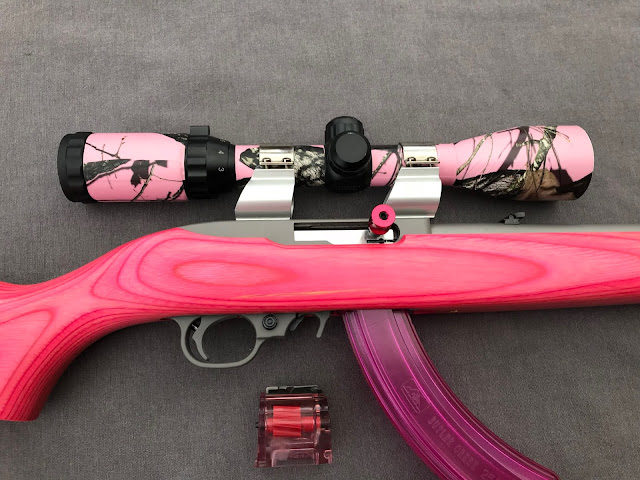 This one started with a bull barrel found at a gun show for just $40.

I added a Kingston Armory parkerized receiver and a Hogue thumbhole stock along with a scope and trigger job. I posted this project earlier this month, click here to go to that post

After test firing the gun, I found an issue with the JWH Custom bolt, I swapped it for a factory one that I had blued and the gun functioned without a flaw. This one was posted earlier this month..
Future Projects

I was given a cut down 10/22 stock that was painted pink, I decided to try my hand at another lightweight girly stock, and I had a friend with a daughter that was going to be getting her first rifle soon, so the project had a home once complete.

This is what I am starting with:

I plan on opening up the butt stock, putting some holes in the forend to lighten it up and fitting a factory crescent butt plate, then dying the wood bubblegum pink.

This project started with the thought of how to make a 10/22 lighter, after some investigation I found that you could do it on a budget.

Then I made a purchase on Gun Broker. I found this 80% receiver for sale and decided to buy it and try my hand at drilling out the holes. 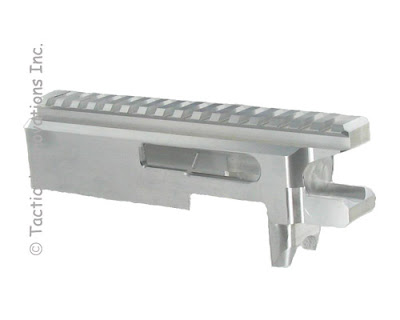 I then got some factory plastic stocks, which I discovered were much lighter (nearly 1/2 pound lighter) than the factory wood stocks.

I also have the cut down (16") barrel from a previous project and the small red dot optic as well.

This project was inspired by the Ruger 10/22 Charger below. 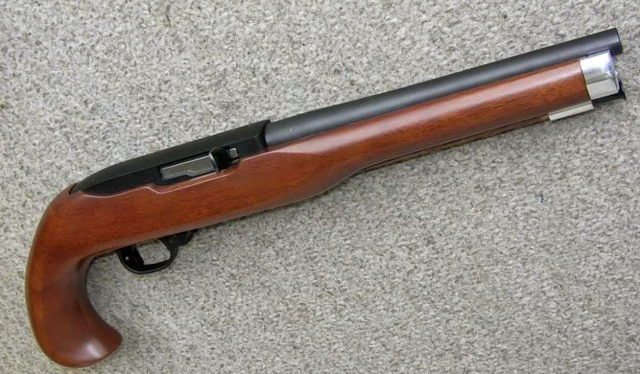 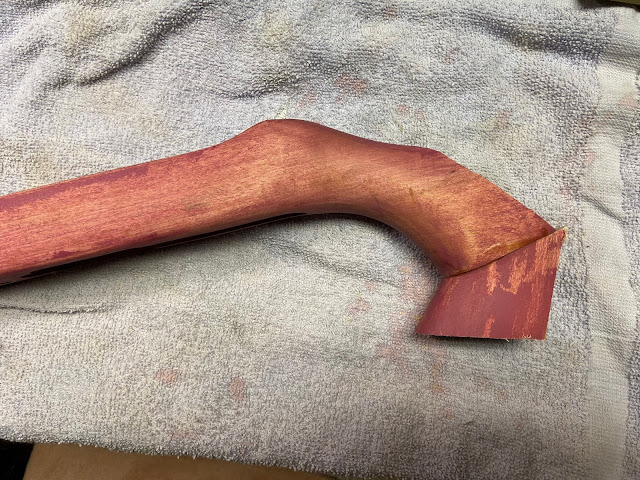 I built a post-apocalyptic rifle a couple of years ago from a beat up and modified Stevens model 325 (see that build here). I decided I wanted to build a 10/22 version of that same gun.

Here are the parts I plan on using:

This is the front section of a factory receiver. I bought it at a gun show for $1, I assume it came from a police auction. I had it machined down so I could install it into a section of 1.5" diameter rectangular tubing....like the front trunnion on an AK-47 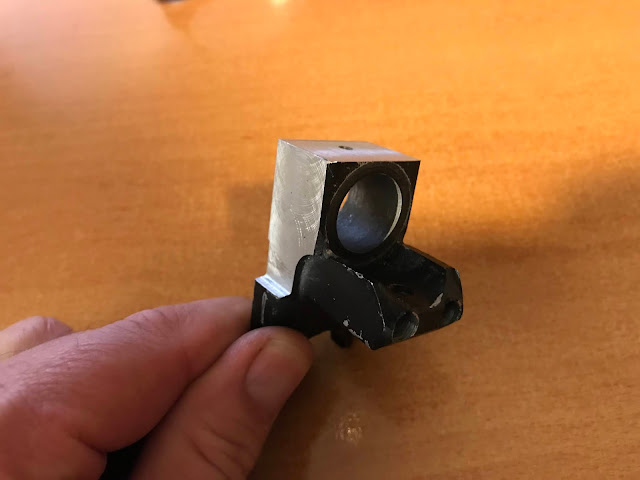 The receiver, about 90% done 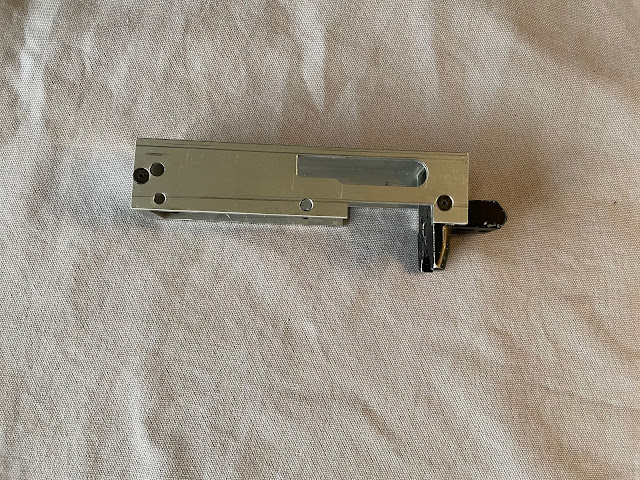 This beat up beech wood stock 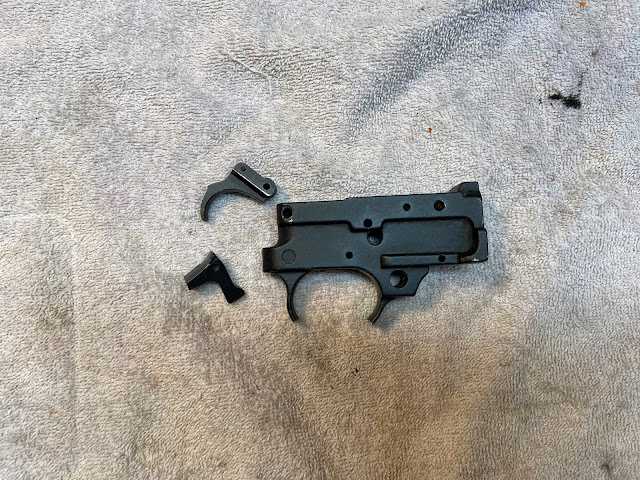 This is similar to the Spencer Rifle Tribute, I found a set of brass pieces from a Hawken rifle on line and decided to fit them to a Ruger 10/22 stock. 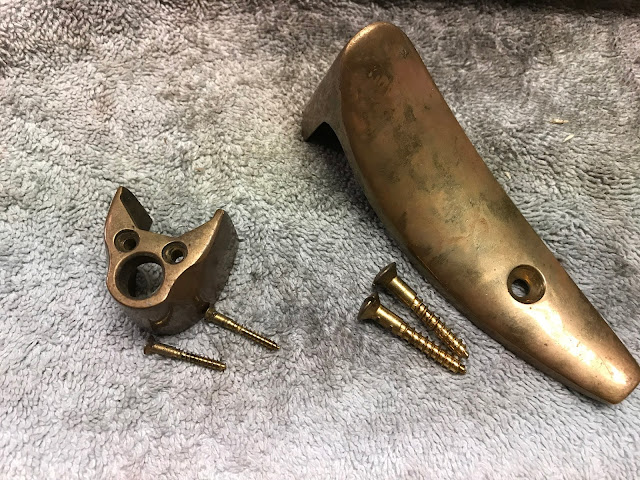 It will look similar to the one below 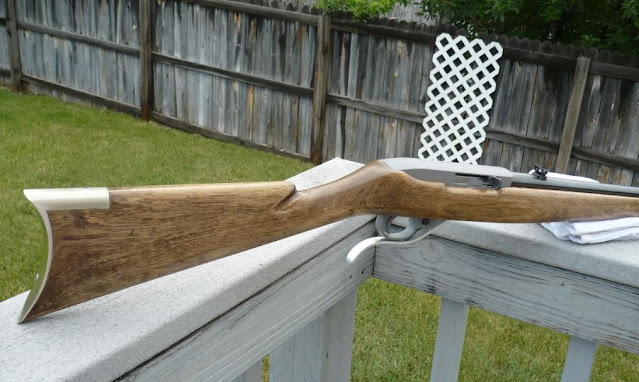 After we lost Eddie Van Halen in October I was watching videos on Youtube which led me down the rabbit hole of his famous guitar. There are legions of "Frankenstrat" geeks out there who have attempted to replicate a guitar that was built and painted on the fly over several years.

So I decided as a test of skills to replicate the paint job on a wood 10/22 stock. The factory wood stocks are Beech or Birch which is similar in grain and color to the Ash wood Eddie used for the body of the Frankenstrat.

Below is one person's attempt to replicate the paint, but on a plastic stock. 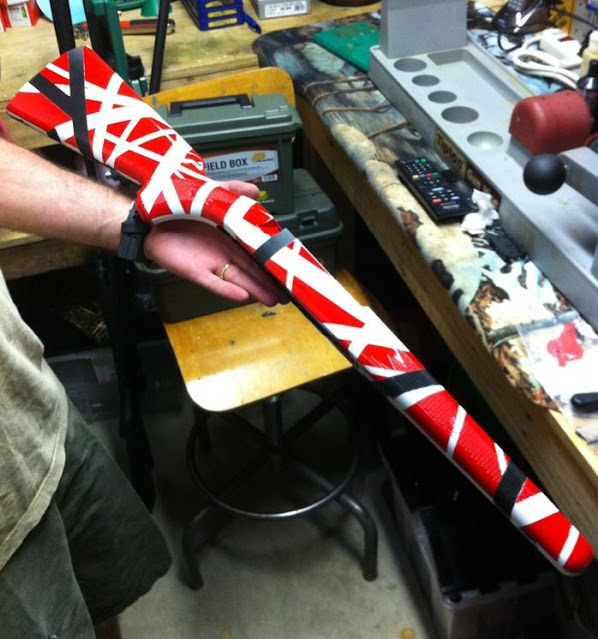 This is what mine looks like now, I added the steel hooks for sling swivels (like the original Frankenstrat had) I still have to put together a barreled action to go into it.

This project doesn't have a name yet, but like my previous target stock, it will have a custom paint job. The paint job will employ the "marbleizing" technique and I will install a polished aluminum butt plate and matching cover on the forend. 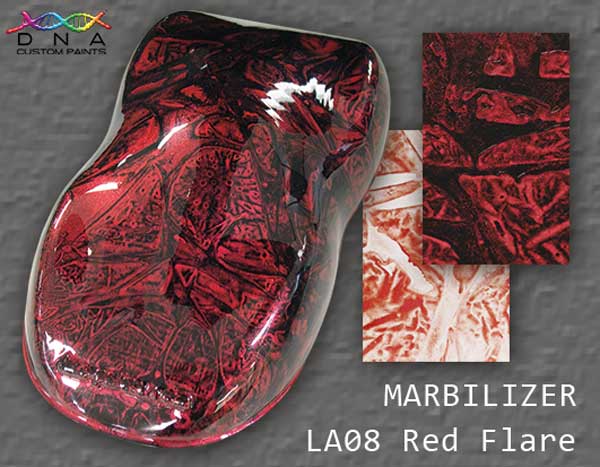 Through my collecting of parts I have acquired a vintage barrel (marked Southport with no warning) with original sights, an original, complete aluminum trigger housing and a vintage walnut stock with aluminum butt plate and barrel band. All I need is a vintage receiver.