Our featured gun today is the Remington model 12. The model 12 is a pump action, rimfire rifle.
In the days before idiotic rules, crazy people defecating on the streets and socialists in seats of power....we used to have a very safe, but also fun world.
Shooting galleries at fairs, boardwalks and carnivals used real guns with real ammo to shoot at various moving targets. The model 12 was one of those guns used at the shooting galleries, which made it a favorite with grown men and boys alike.....I suppose there were some women folk included in there as well.

The Model 12 was designed by John Pederson, perhaps the second most prolific gun designer behind John Browning.

The attractive rifle was Introduced in 1909 and manufactured through 1936, with close to 832,000 units produced. 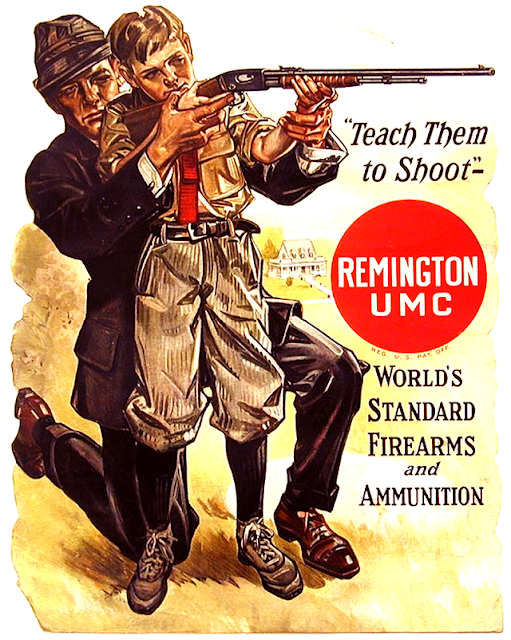 The .22 Remington Special was identical to Winchester's .22 Winchester Rim Fire (.22 WRF) cartridge. This was simply a case of Remington not wanting to put their rivals name nor initials on their barrel. So they gave the cartridge a round nose bullet (as opposed to the flat nose Winchester bullet) and a new name. 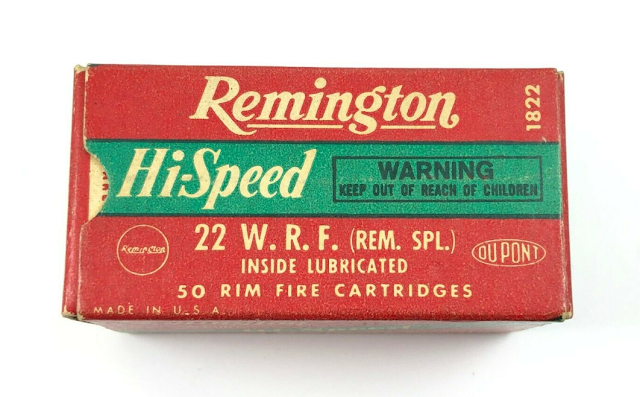 Remington eventually capitulated and put the "WRF" abbreviation on their cartridge boxes with "REM SPL." in parentheses

For the record the 22 Rem Special/WRF was the predecessor to the .22 Winchester Magnum Rimfire. The 22 Magnum was introduced in 1959 and between it's superior performance and the increased velocity of specialty .22 LR cartridges, there was no longer any need for the .22 Rem Special /WRF.
The ammo is still available, however, from Winchester and CCI. 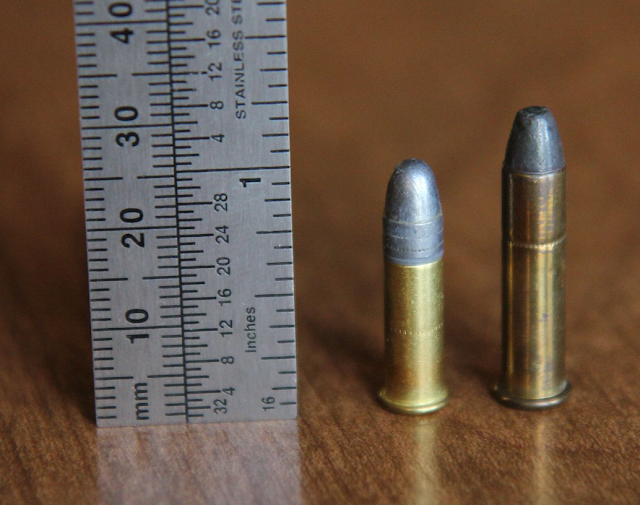 The rifle was initially called the "New Repeater", then the model 9, finally the model 12 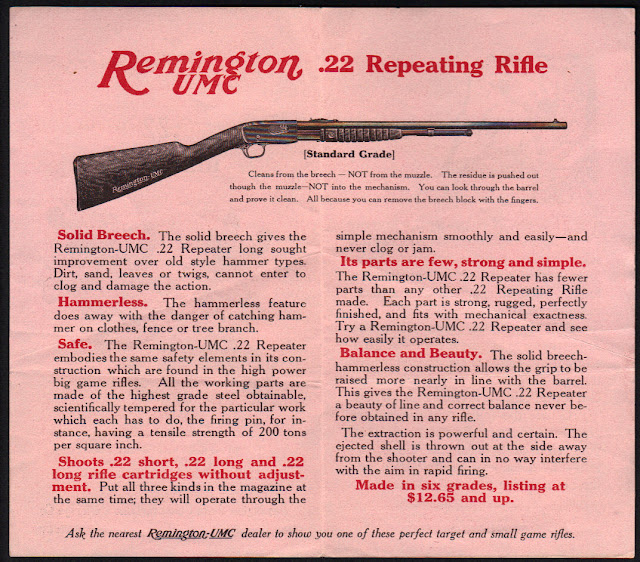 An original "hang tag" that would have been affixed to the rifle's trigger guard: 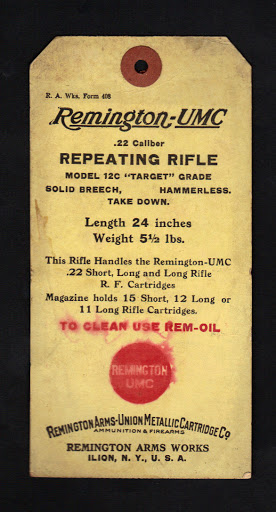 There were several "grades" of the model 12 offered. A suffix would be added to the model number to designate:

All models except the basic model came with octagon barrels.
An "S" suffix was added to indicate a chambering in .22 Remington Special, thus a model 12C became the 12CS and so on. 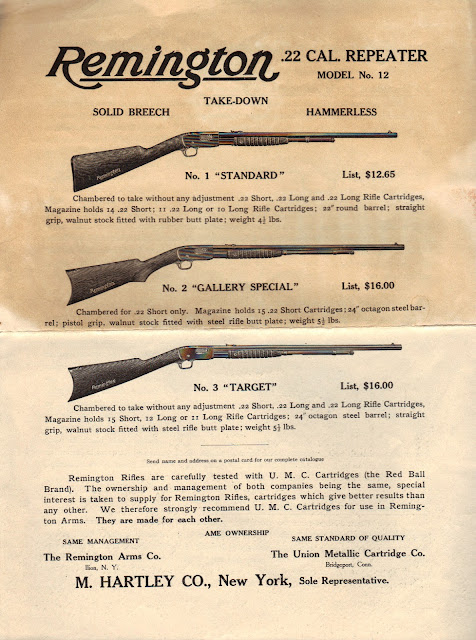 Another side note to the story, the competition:

In 1912 Meriden Arms (a division of Sears) introduced a pump action rifle supposedly designed by Basil Savage, son of Arthur Savage. It was dubbed the model 15. This gun later became the Mossberg models K, M & S.

Then in 1929 Savage introduced a .22 pump that looked very similar to the Meriden/Mossbergs.

Savage model 29, started life as the model 1903 (with a box magazine), before getting its under-barrel tube magazine.

In 1932 Winchester decided to create their own version, called the model 61.

Besides the sleek appearance and concealed hammer, the gun also had a unique forend assembly which was connected to the magazine tube. The mag tube would move with the forend as the shooter ejected and chambered a new round.
Specs:
Action: Pump/Slide Action
Chamberings: .22 short, long, long rifle and .22 Remington Special
Barrel Length: 24"
Overall Length:
Weight: 4 1/2 - 5 1/2 lbs
Years Produced: 27 years, 1909 - 1936
Quantity Produced: just shy of 832,000 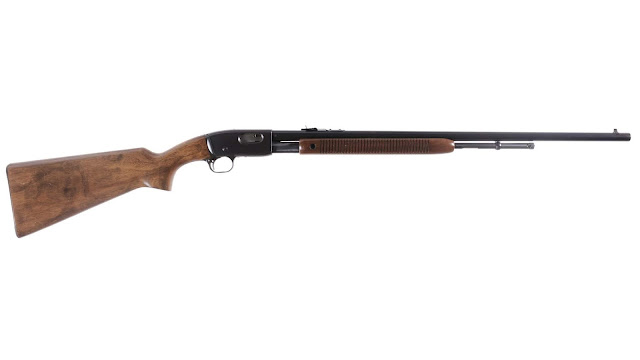 As usual this post was inspired by a gun (or two) that I have come into contact with.

I repaired this model 12 several years ago for my Father-in-law, it was before I had the blog and I didn't document the repairs, which included finding and repairing a bolt for it as well as a few missing screws.

I also have in my safe a model 572 Field Master.

The next model 12 that I came to own is this model 12C, it was made in October of 1926, features an octagon barrel, has a 9 round capacity and is chambered in the .22 Remington Special Cartridge., although it doesn't have the "s" suffix on the model number. I have seen other like this and they are always listed as very rare, not sure if that is true.....

Anyway, I purchased this gun a while back from a relative who was liquidating his collection and this one caught my eye. I am a sucker for octagon barrels and crescent butt plates…..

and if you are wondering about the availability of the .22 Remington Special/.22WRF ammo, I was able to pick up some boxes of CCI (they had plenty on the shelf) at my local gun store for just $10.99 per box (50 ct) 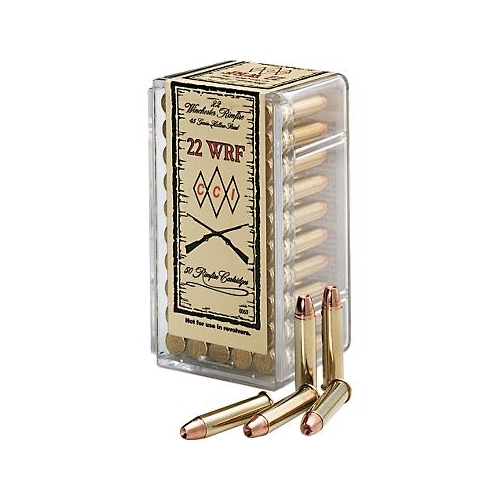