The Samozaryadny Karabin sistemy Simonova or SKS is a gas operated semi-automatic carbine designed in the Soviet Union during WWII. The name is translated to English as the "Self-loading Carbine of the Simonov system".

The story of the SKS starts with a man named Sergei Gavrilovich Simonov. Simonov was born on April 9th, 1894 in what is now Vladimir Oblast (about 120 miles from Moscow). After graduating from the Moscow Polytechnic Institute he went to work at the Tula Arsenal and in 1927 was promoted to the Design and Development Department. Working under the tutelage of gun designer Valdimir Fyodorov on various rifle designs.

Simonov, in center during test firing of an anti-tank gun 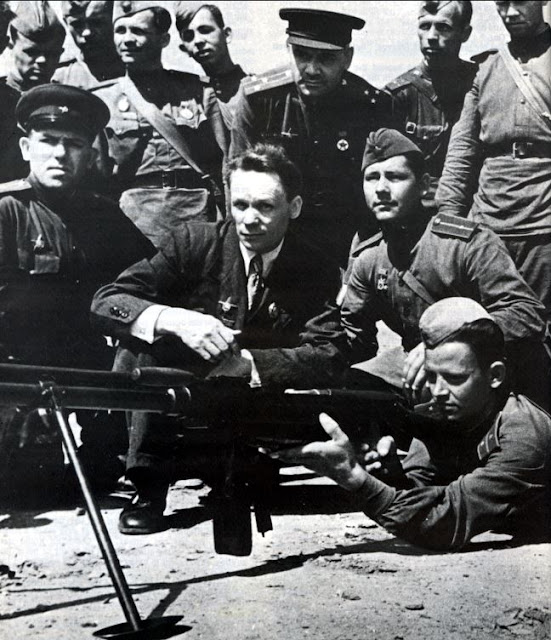 In 1930 they began working on a gas operated auto-loading rifle. The ideas and designs culminated in a rifle that competed in 1935 against one built by equally famous Soviet arm's designer Fedro Tokarev.
Simonov's design was chosen and it was adopted in 1936. Officially named the AVS-36 (Avtomaticheskaya Vintovka Simonova 1936 model).

The AVS-36 used the Russian 7.62 x 54Rmm cartridge, the Soviet military's standard round, having been adopted in 1891 for the Mosin Nagant bolt action rifle.


The AVS-36 had some issues to contend with and in 1938 a new contest was held, this time Tokarev's design won and that rifle became the SVT-38 (Samozaryadnaya Vintovka Tokareva, 1938), translated as Self-Loading Tokarev Rifle.

The SVT-38 was redesigned in 1940 and the SVT-40 was adopted shortly after. The SVT also fired the 7.62x54R cartridge.
Keep in mind, the mainstay of the Red Army was still the 91/30 Mosin Nagant bolt action rifle.

World War II and German weapon development had a big impact on the Soviet arms designers. If you were not aware, many (maybe most?) Soviet era weapons were influenced by German arms.

The Third Reich had developed a light, short easy handling carbine that fired an intermediate cartridge (7.92 x 33mm Kurz). The gun was very effective at closer ranges and this impressed the Russians (and the Americans for that matter).
The German weapon was none other than the Sturmgewehr 44 (Storm Rifle) or StG 44 for short.

This weapon led to the development of the most prolific rifle in history, the AK-47, but for this story the important part is the cartridge and the philosophy that an intermediate, less recoiling cartridge was ideal for certain combat situations.

The Soviets designed their version of the 7.92x33mm Kurz using the same advertised diameter bullet as their full size rifles, their submachine guns (PPSh-41 & PPS-43) along with their pistols (TT-36 Tokarev), but with a 39mm long case. They now had a family of small arms cartridges for all types of combat (although only the Tokarev cartridge has a true 7.62mm diameter bullet). 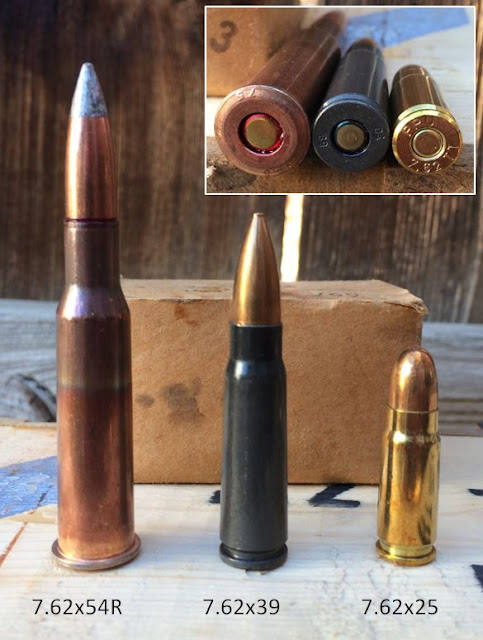 In 1943 the 7.62x39mm was adopted. Later that year a redesign of the AVS-36 rifle began. What emerged was a shorter, lighter, improved carbine chambered for the new M1943 round: the SKS.
Although some may say that the SKS is not at all related to the AVS-36, they at least share some characteristics, if nothing else the lessons learned on the AVS rifle made the SKS a better arm.

Production started in 1945 and some units were shipped to the front lines in WWII. It was officially adopted by the Red Army in 1949 and was produced in the Tula Armory until 1955 and the Izhevsk plant in 1953/54, that however, was not the end of the story for this rifle.

As with most Soviet weapons, the satellite states were authorized to manufacture versions of the SKS, including Albania, Yugoslavia, Romania and East Germany.

This also included other Communist nations like China, North Korea and North Vietnam. The two latter ones being highly collectable.
There is some dispute as to weather or not North Vietnam actually produced weapons, just assembled them or just re-marked them.

You may have noticed that Czechoslovakia is absent from the list, they used their own rifle, the VZ-52, originally chambered in 7.62 x 45mm and later in 7.62 x 39mm.

The Simonov and its variants came with two different bayonets. The earlier ones were a 9" blade style. The later ones were a spike style measuring close to 12" in length. Both types folded back under the stock, held in place by a spring loaded pivot & notch system.

The butt stocks have a hollowed out cavity for storing a cleaning kit. 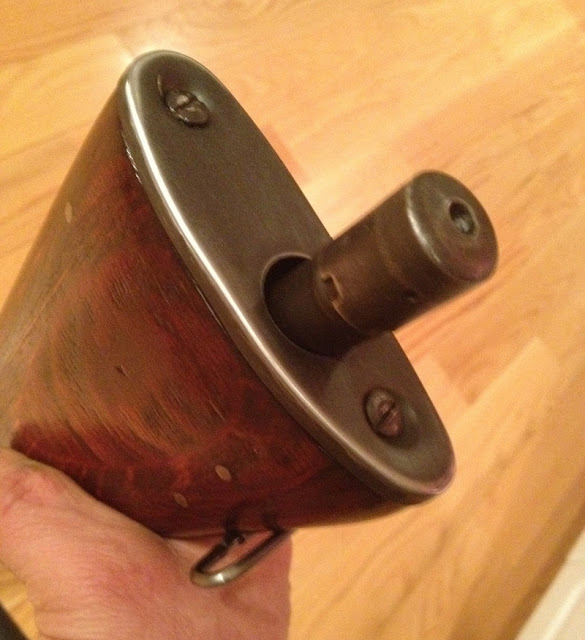 The body of the cleaning kit acted as the handle for the cleaning rod, the lid fastened over the muzzle to protect the chromed rifling. 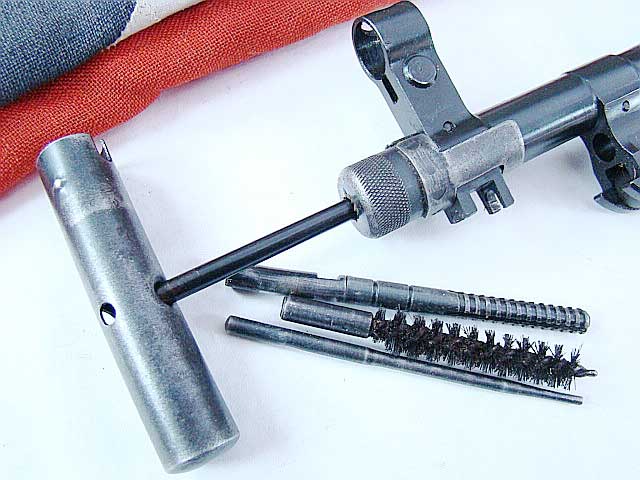 The cleaning rod fit under the barrel in a series of holes, with the head sitting in a notch between the bayonet and barrel


The SKS magazine is loaded from above by hand or via ten round stripper clips that fit in a slot cut into the front of the bolt carrier. 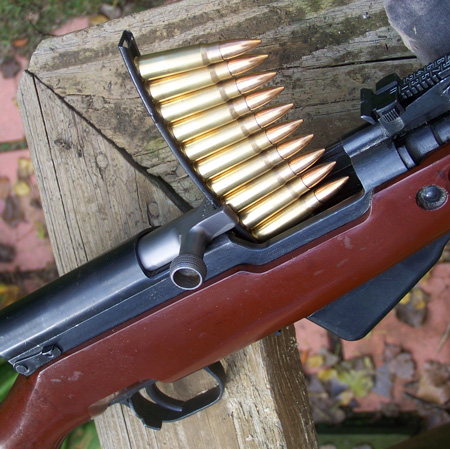 More than 15 million SKS rifles have been built since the first one rolled off the Tula assembly line in 1945. While that seems like a lot, it is about 1/2 the number of Mosin-Nagant 91/30 rifles that were produced.


In 1955 the Soviet Tula arsenal was tooling up to build the AK-47 and was getting rid of their tooling for the SKS. China, the Soviet's Communist neighbor was in need of help in the small arms department and selling them the left over tooling from the SKS made sense.
So in 1956 the Soviets oversaw production of the Chinese built rifles at the Jianshe Arsenal, whose identification stamp resembles a triangle with the number 26 in the middle. These rifles were dubbed the "Sino-Soviet" SKS, their official name was the "Type 56" for the year it was adopted. The stocks were made from a Asian Birch, covered in a thick layer of shellac.
Some of these weapons made it into the hands of the North Vietnamese and Viet Cong. Whether they were made or assembled in North Vietnam or came directly from China is an on-going debate, but there is not doubt they were used. 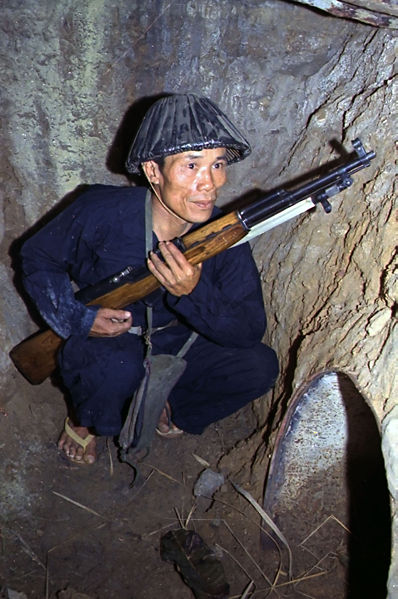 As the Chinese took over production, short cuts and changes were made so the guns could be built cheaper. Parts made of stamped steel, pinned in barrels (rather than screwed in) and cheaper wood (Chu wood in lieu of Birch) stocks.
The pinned barrelled SKS used a slightly different stock as the recoil cross-bolt was moved. Attempting to mix a pinned barrelled SKS with a threaded barrelled stock will be met with fitment issues.

Thousands of the surplus and newly made SKSs made their way to the U.S. market. In October of 1994, Bill Clinton issued and Executive Order making the importation of weapons from China illegal.


China is still exporting the guns to Canada, curiously their government still sees the SKS as having a "sporting" purpose, where as the Democrats in the U.S. don't.

In 2012 some enterprising folks were "rebuilding" Chinese SKSs with surplus Albanian parts.
Overall the imports have slowed down to a trickle as no new ones are being produced in Europe.

Prices for the SKS started very low, which no doubt helped make them so popular. Those prices have stabilized in the $300-$350 range with more rare models going for $100-$150 more.

The SKS is still used today as a ceremonial arm 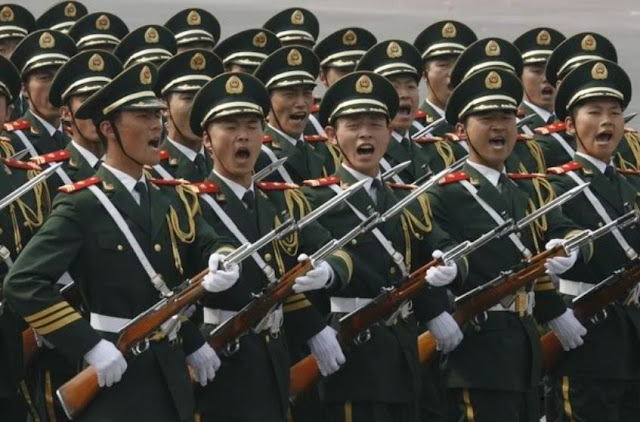 Aftermarket
There is very strong aftermarket support for the SKS. I could easily fill a post just with aftermarket parts and modifications.

Before we show you those options there are two things to consider:
Many purists will be vocal about their disdain for such modifications, I personally do not have a problem with modifications as long as they are not permanent. I have personally restored an M1903A3 back to original configuration, which would not have been possible had the previous owner performed any permanent mods. 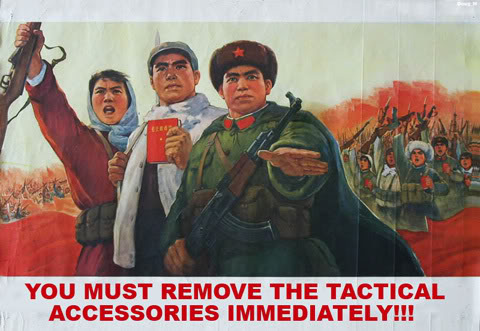 There is another important thing to note, when modifying an SKS, you need to keep a ridiculous government regulation in mind. Any modification to an SKS puts it under the purview of 922R.

This little gem was hidden in the Brady Handgun Violence Prevention Act, signed into law by President Clinton on November 30, 1993 and went into effect on February 28, 1994. Remember this when it comes time to vote, the Brady act was passed by a Democratically controlled congress and signed by a Democrat President.

The law states that if the gun is modified from its original, imported state, then you are considered to be "manufacturing" the firearm (which I doubt would hold up in court should someone ever be prosecuted for it) and you will not be legal if you use more than 10 imported parts.....
This list from gun wiki shows what original SKS parts count toward the total. There are 15 parts on the list, five of which you must replace with U.S. made parts. 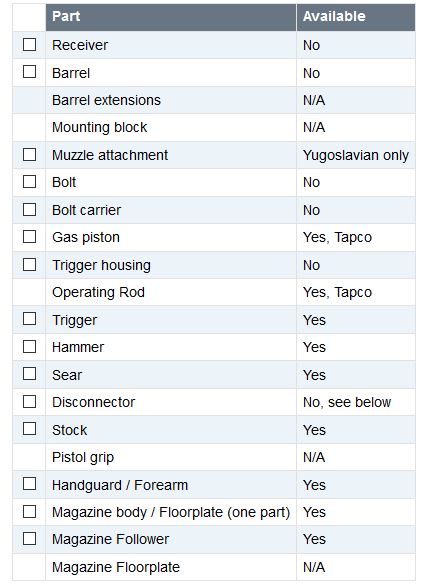 The most interesting thing about the 922r requirements is that gun owners are about the only people who know it exists. While there are plenty of scofflaws and neophytes out there modifying SKSs, and to date I have not heard of anyone prosecuted under the law, you may want to consider the ramifications first.

Assuming you want to move forward with customization here are options: 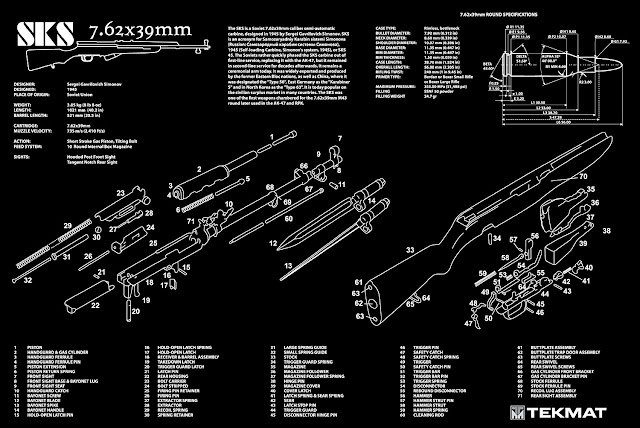 One of the more popular modifications is the magazine. One option is to use a Chinese made 20 round fixed magazine. 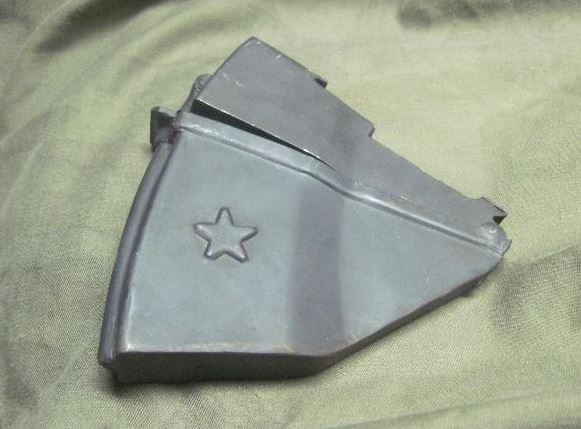 Although there are many companies that make detachable "duckbill" magazines, the 20 round Tapco ones seem to be the most popular. 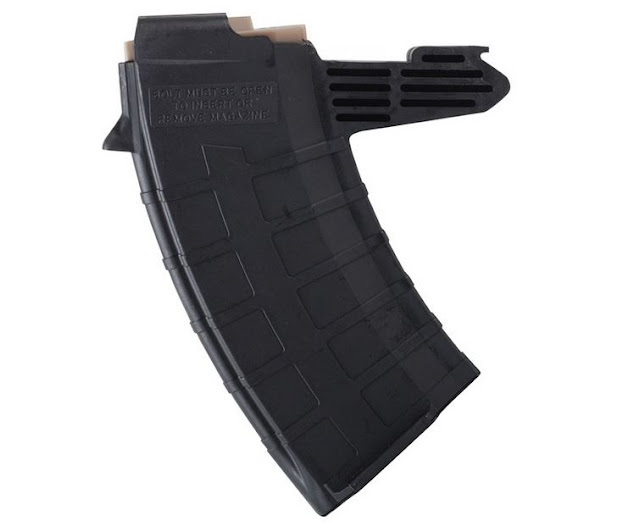 All SKSs had a short LOP by American standards, there are multiple recoil pad options for increasing the length of pull, here are a few: 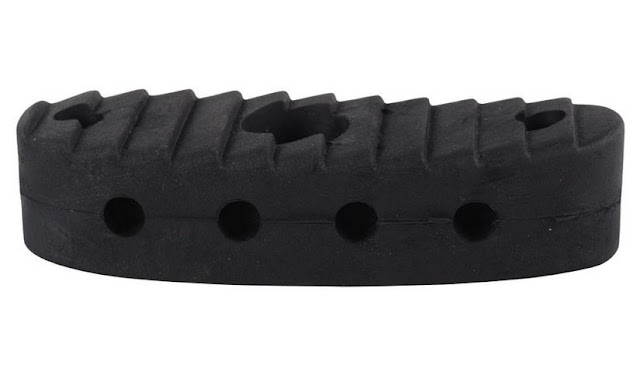 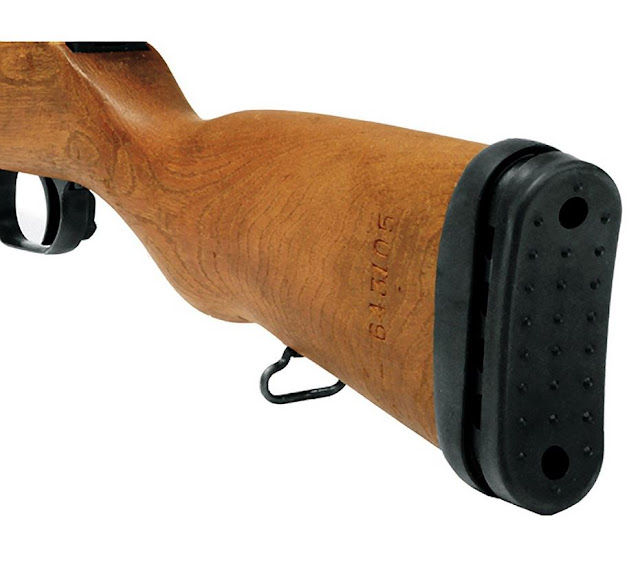 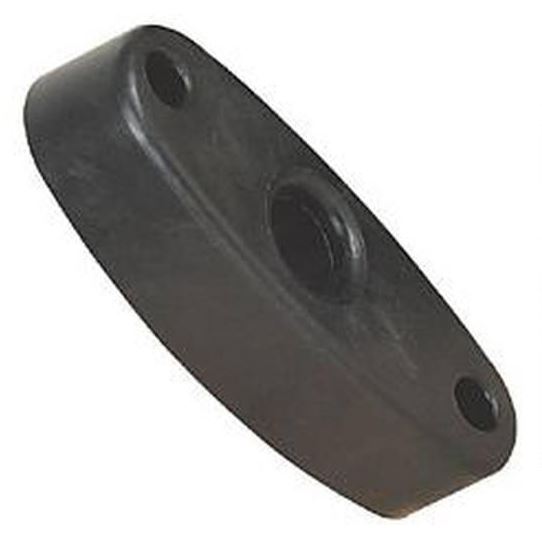 Tapco offers their "Intrafuse" stock system for the SKS

ATI makes a couple of different stocks, this is their "Strike Force" unit.

If you want something really unique, check out Matador Arms aluminum chassis, they call it the Sabertooth MK-II 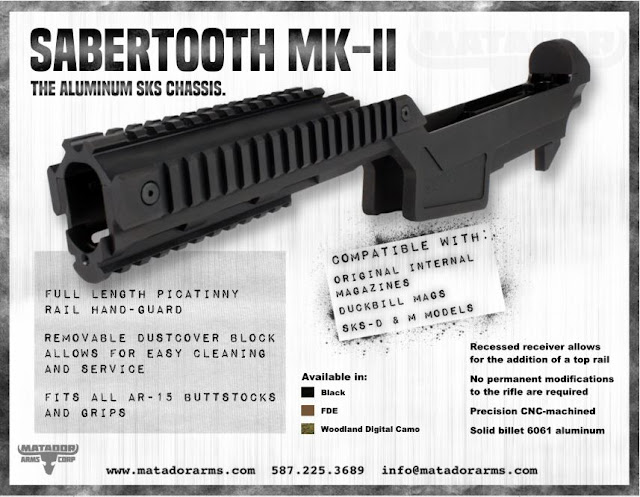 I first heard of the SKS in 1991 (I was just getting into the hobby). I found a deal on some newly imported Chinese Type 56 SKS rifles from an importer in California. He hand picked my first rifle, it was one of the "Sino-Soviet" guns. I paid a whopping $59 dollars for it (wholesale cost).

I later purchased a "Paratrooper" model with the shorter 16" barrel for $10 more.

Back then you could also buy a 1,220 round case of steel core Norinco ammunition for $120, delivered to your door.

Korean War Online
Posted by Case at 7:05 AM