This is a combo post, it is both a featured gun article and the start of another project.

The subject of this month's featured gun article is the J.C. Higgins model 41: 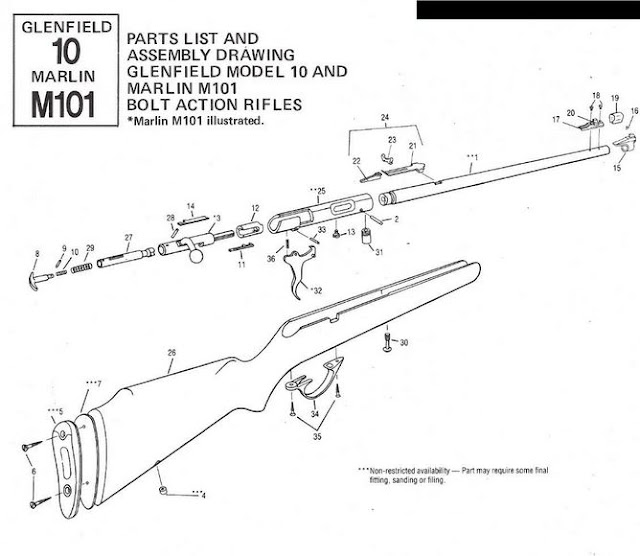 The cocking knob and trigger guard changed over the years, it was at times a t-handle, a round knob or a ring. 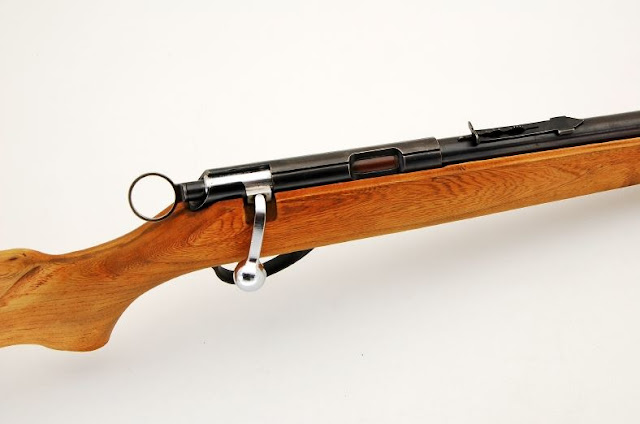 The rear sight was a open/leaf style 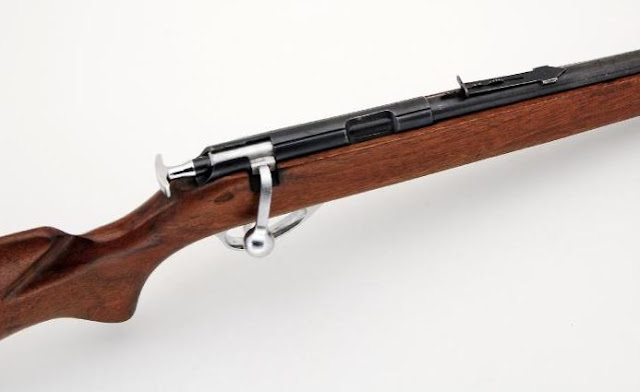 Butt plate was plastic and said to be "unbreakable" 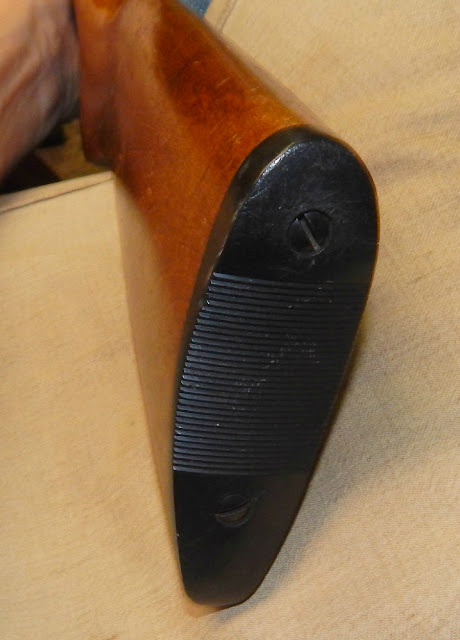 You may remember a project a while back where I restored the metal finish on a J.C. Higgins model 41 rifle. 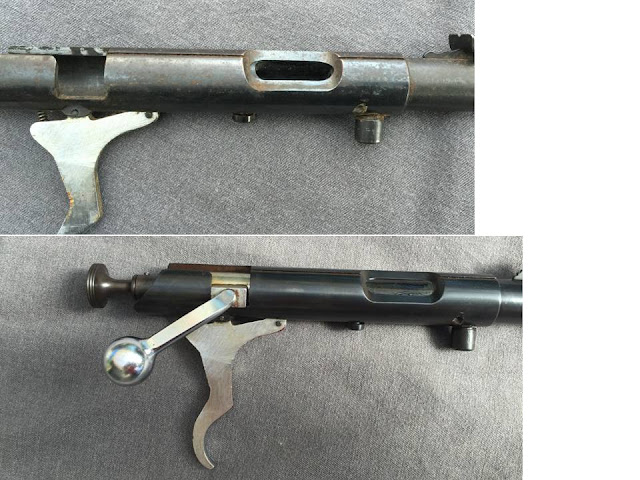 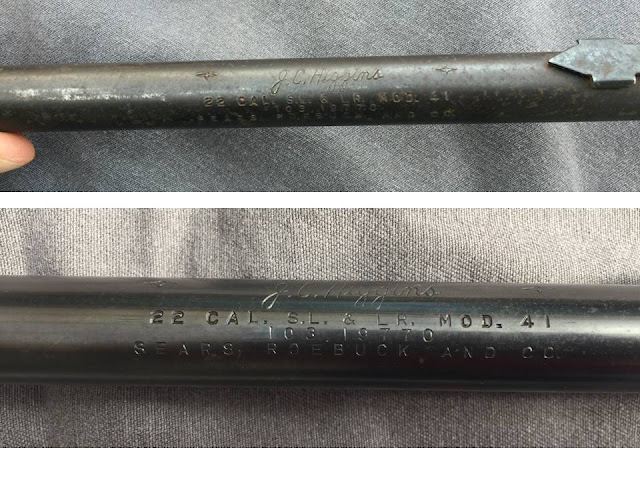 The rifles were very simple in their construction, using a tubular receiver that was pinned to the barrel.
The bolt has no resistance to closing or opening as the knob on the back must be pulled rearward to cock the trigger mechanism. The trigger return spring is a simple coiled spring that indexes in pockets cut in the receiver and the trigger. 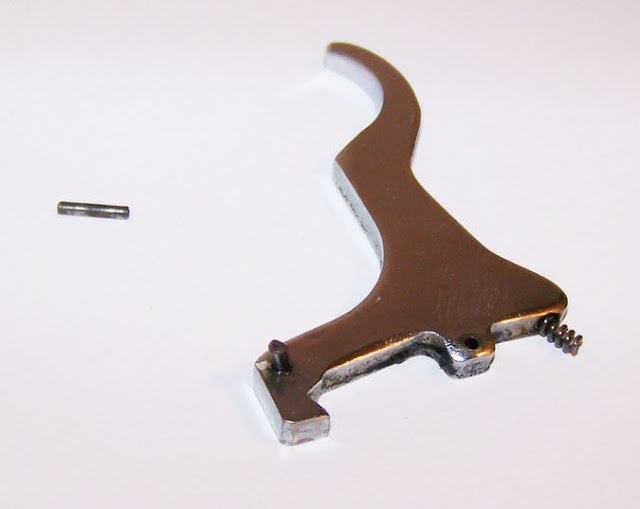 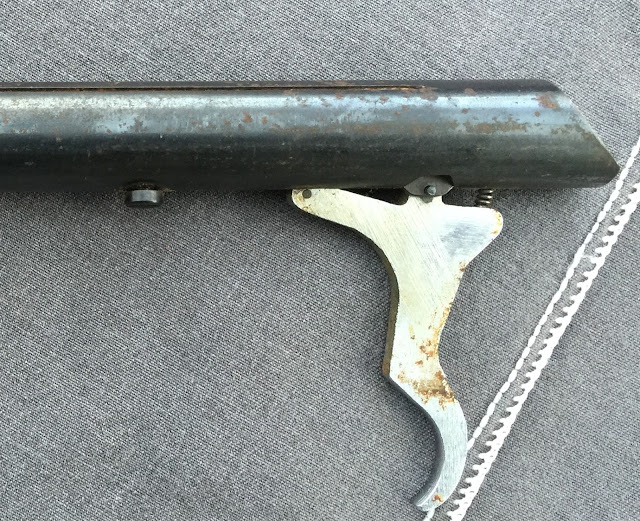 current value: between $65 and $125 depending on condition, fortunately these guns have not taken off with the collectors, so get one while they're still cheap.

I find it a bit ironic that they claimed their butt plates were "unbreakable" and yet the two stocks I have found both had broken butt plates.... 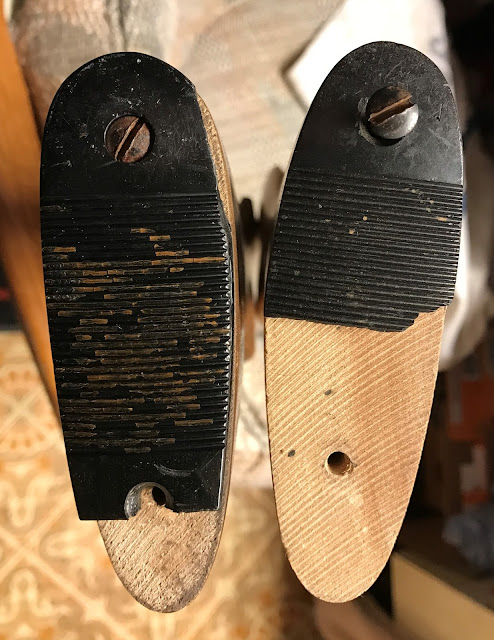 In a weird twist of fate I found one at a yard sale for $20 and could not resist buying the gun for a project.

One of  the chores with a new gun is determining when it was made.
This gun as no serial numbers which means it had to be made before 1968 (the 1968 Gun Control Act required all guns to have unique, traceable serial numbers).

It also carries the J.C. Higgins brand which, as stated above, Sears quit using in 1962.

The plastic trigger guard and butt plate are the third clue in determining the age of this gun. Plastic was rarely used on guns before WWII, but came into common use following the War.
We also know that Marlin used walnut stocks through 1948, but switched to birch after that, but went back to walnut (briefly) in 1957. I don't know if that applied to the name branded guns like this one, but we will have to assume.

This gun has a birch stock, so if the stock material was also changed on the name branded guns, we can assume it was made between 1948 and 1956.
Another clue is the rifling, Marlin abandoned their Ballard rifling in favor of their new "Micro-Groove" rifling in 1954. This gun also has the Micro-Groove rifling. This means our rifle was built after 1954 (when they switched the rifling) and possibly before 1956 (when they switched the stock material), but definitely before 1962 (when they quit using the J.C. Higgins name). Clear as mud, right?

We can just say mid-late 1950's manufacture and be close enough.


Here is the gun when I first brought it home: 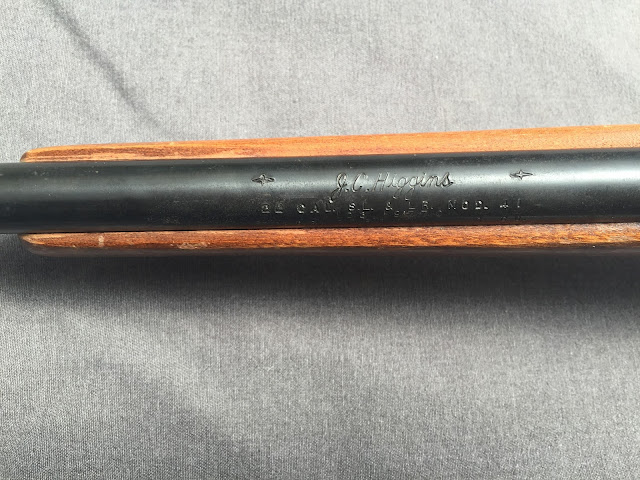 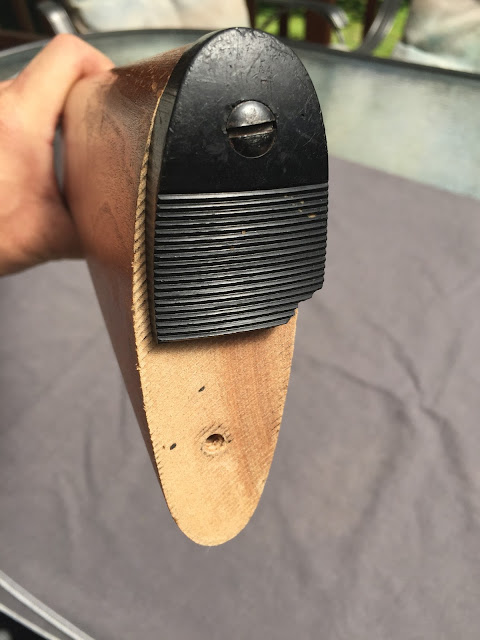 You may not be able to tell from the pictures, but the rifle needs to be reblued and the wood has lost its stained "walnut" finish, while also sporting some "battle scars" from years of use/abuse.


Beyond the refinishing of the wood and steel, this project will also include replacing some broken and missing parts including the butt plate, trigger guard, sight elevator and the bolt assembly.


Sources:
Brophy, William S., 1989, Marlin Firearms: A History of the Guns and the Company That Made Them, Mechanicsburg, PA, Stackpole Books
Posted by Case at 6:50 AM