It has been called the "Jeep Wrangler of the gun world", "the Barbie Doll for men",  " The Little Carbine that Could".

Bill Ruger described it as "avoiding all the usual banalities", meaning that it was anything but typical.

It was innovative, using both new technologies in manufacturing and design while keeping a profile that was reminiscent of the past.

The Ruger 10/22 was born (practically speaking) in March of 1964, this year to celebrate its birthday I decided to devote all of my posts this month to the venerable Ruger 10/22.

We'll start with some facts about the rifle:

When the Outdoor Channel TV show Gun Stories aired a segment based on the 10/22, host Joe Mantegna asked several people about the 10/22. The most common response was: "Hey, I own one of those".
At the conclusion of the show, Mr. Mantegna's final words were: "I too, own one of those" 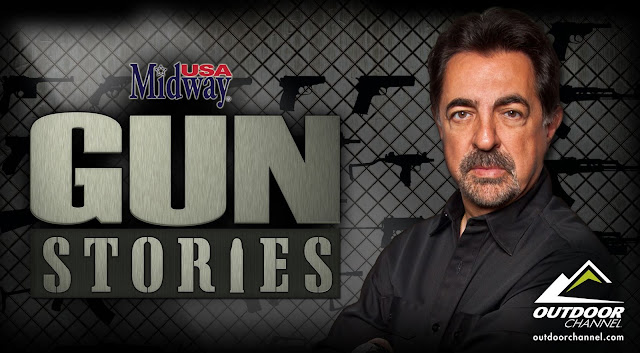 Serial #1, the very first Ruger 10/22 to roll off the assembly line

The aluminum trigger housing was switched to plastic in 2008, the change included an extended magazine release.

The Ruger 10/22 replaced the Remington Nylon 66 within the U.S. Military's "Commando" units

It is possible to build a 10/22 rifle without using one single Ruger part. 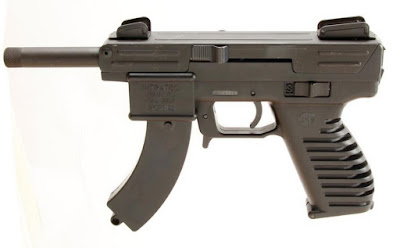 The trademarked name for the plywood used on the 10/22 laminated stocks is called "Stratabond".


The design of the 10 shot rotary magazine came from one of Bill Ruger's favorite rifles: the Savage model 99. 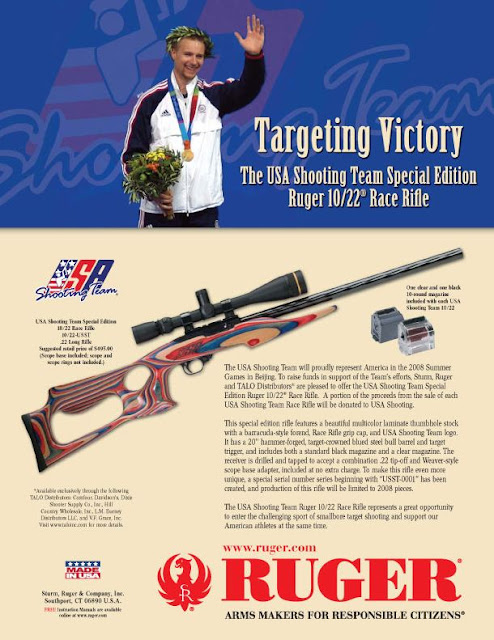 The first 200 10/22 rifles were sold to employees, friends of Bill Ruger and gun industry professionals.

The material for the plastic butt plate is called Celcon and is supplied by General Electric. 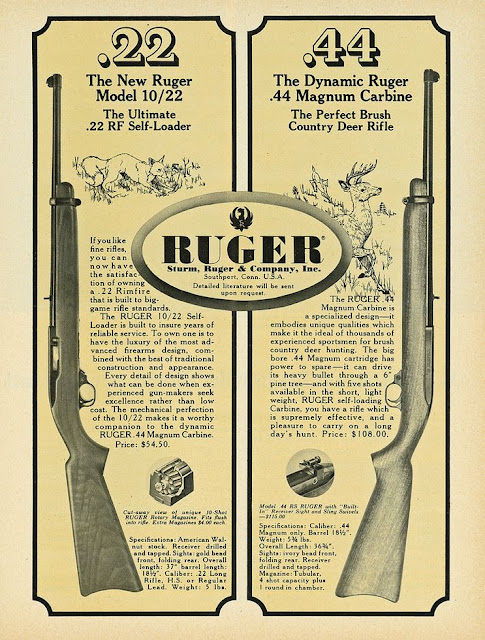 Buzzpro.com listed the 10/22 as the number one on their list of The Top Ten Guns Every American Should Own.

For the year 1976 Ruger added the line: "MADE IN THE 200th YEAR OF AMERICAN LIBERTY" to the barrel.

The stocks were originally produced by the S.E. Overton Company of South Haven, Michigan.

in 2004, for the rifle's 40th anniversary, Ruger introduced a clear/see-thru version of the BX 1 rotary magazine. The magazines are still made and continue to sell well. 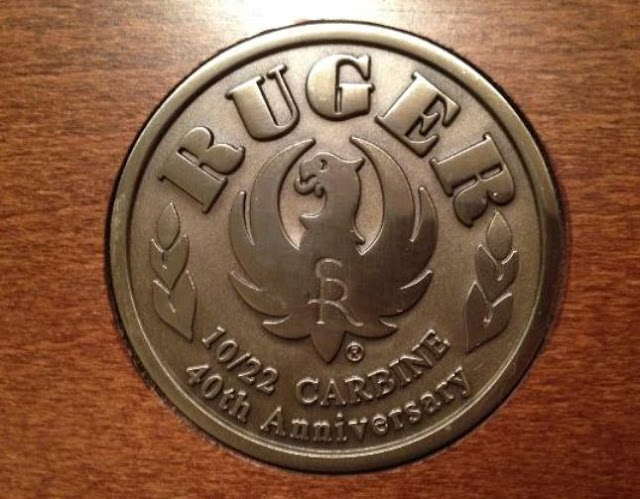 A Ruger 10/22 uses eight springs (including the BX1 magazine)

The trigger pull on an unmodified 10/22 is approximately 6 pounds. 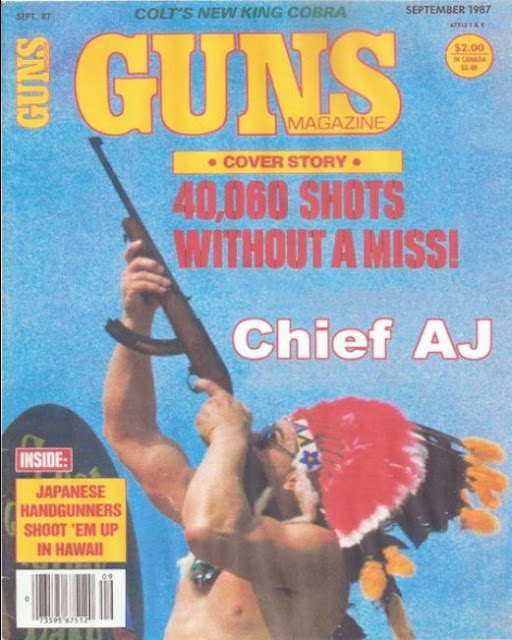 Peterson's Hunting Magazine listed the 10/22 as one of the Five Best .22 Rifles Ever Made.

Ruger began producing synthetic stocks for the 10/22 in 1996, often called the "boat paddle" because of the void in the butt stock.

Some time around 1980 (about the same time the walnut was switched for birch) the metal butt plate was changed to plastic.

In 1986 Ruger introduced a stainless steel version of the 10/22 using a stainless barrel, bare aluminum receiver trigger housing and barrel band. The later versions have a painted silver coating on the receivers and silver cast plastic. The gun also came with a laminated stock, also a first for the 10/22.

Suppressed 10/22s are used by the Israeli IDF units for "less than lethal crowd control". 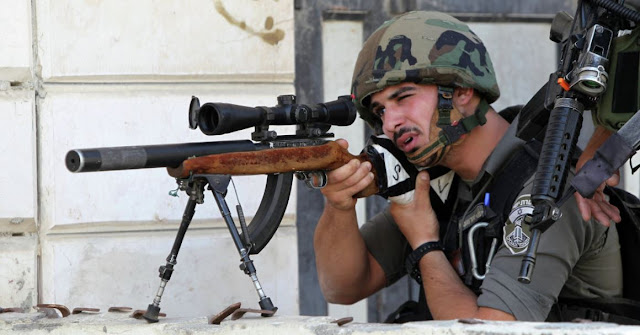 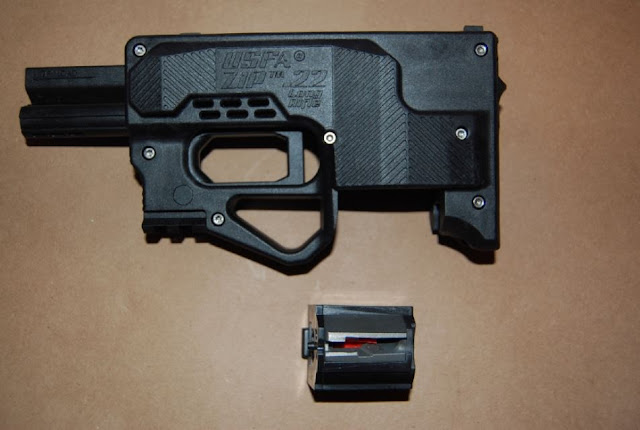 The original rotor/follower in the BX1 magazine was black, it was switched to red in the 1970s.

Ruger introduced a "Sporter" model in 1966. It featured a Monte Carlo style walnut stock with finger grooves and no barrel band.

The body of the prototype BX magazine was made of aluminum 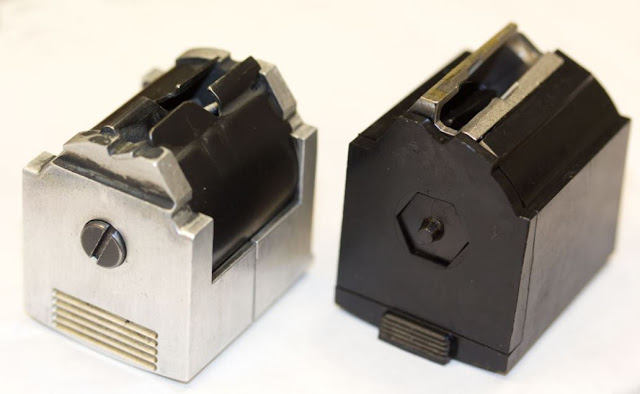 In 1984 Arcadia Machine and Tool (AMT) began producing a stainless steel copy of the 10/22 calling it the 25/22 Lightning.
Production ended after Ruger filed a patent infringement lawsuit. The folding composite stock and 25 round magazine for the Lightning were supplied by Butler Creek. 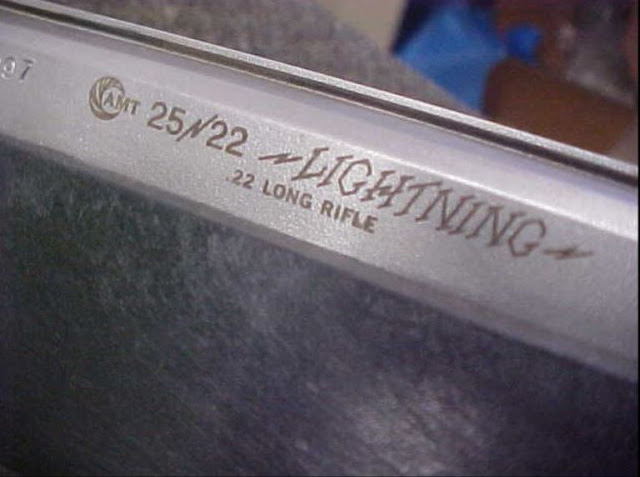 Ruger introduced a 10/17 rifle in 2004. It was chambered in the .17 HMR cartridge and built on the 10/22 Magnum receiver. It was listed in the catalog for two years, but apparently never sold due to issues with the pressures developed by the cartridge.

In 2005 Ruger introduced a 10/22 compact carbine model, the gun featured a 16.12" barrel, reduced length of pull and an overall length of 33.5". The reduction in length also shaved 1/2lb off the weight of the rifle.

In 1967 Ruger produced a special 10/22 model to celebrate the Canadian Centennial. The guns featured a Sporter stock with a medallion in the stock and engraving on top of the receiver. 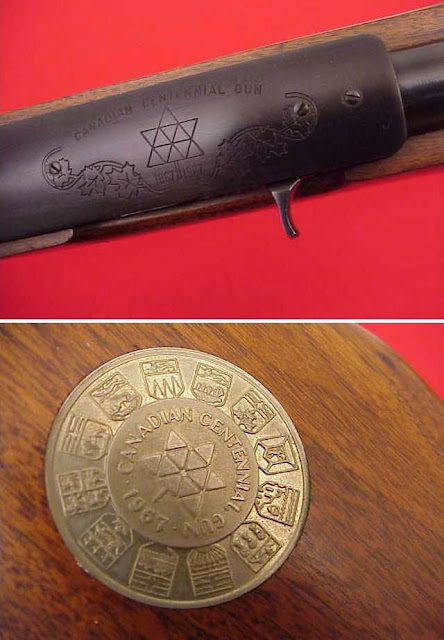 In 2013 Ruger held a contest, allowing one fan to design the 50th Anniversary model. The winning entry below was awarded to a Project Appleseed Instructor from Michigan.

The 10/22 receivers were anodized until 1976 when a Teflon coating began to be used, which was later changed to a powder coating.


Bart Skelton (son of gun writer Skeeter Skelton) received a special engraved 10/22 Sporter Model in 1971 (serial # 111-08857) as a gift from Ruger Executive Steve Vogel.
The gun is now owned by a private collector.

More than 7 million Ruger 10/22s have been produced 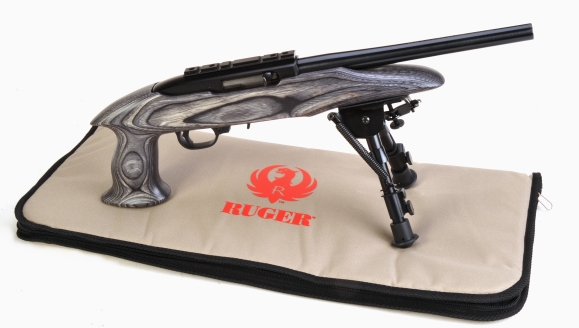 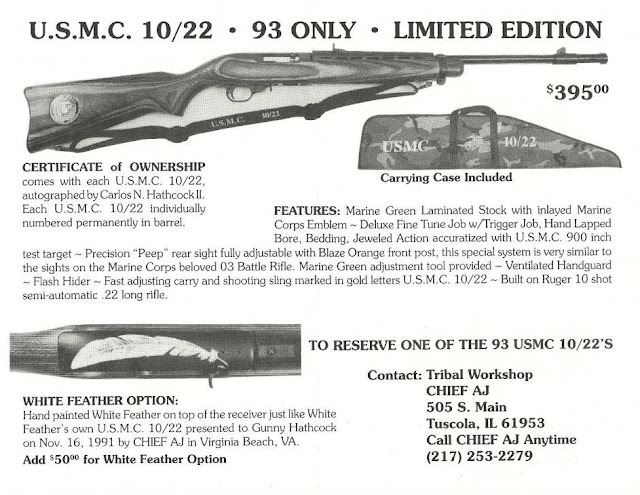 A current production, standard model 10/22 has 9 bolts but only two nuts.

If you took all the barrels Ruger has made over the last 50 years for the 10/22 and laid them end to end, they would cover the 2,000+ miles of road between Chicago and Los Angeles.


On May 2nd, 2014 Ruger sued Filipino arms maker Armscor to stop the production of an identical (and much cheaper) copy of the 10/22. Armscor called it the M22. 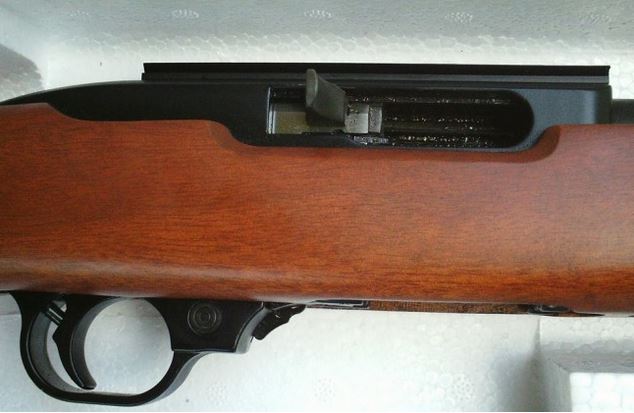 On January 4th, 1978, in response to a personal injury lawsuit, Ruger began adding the warning regarding reading the instruction manual to their barrels. 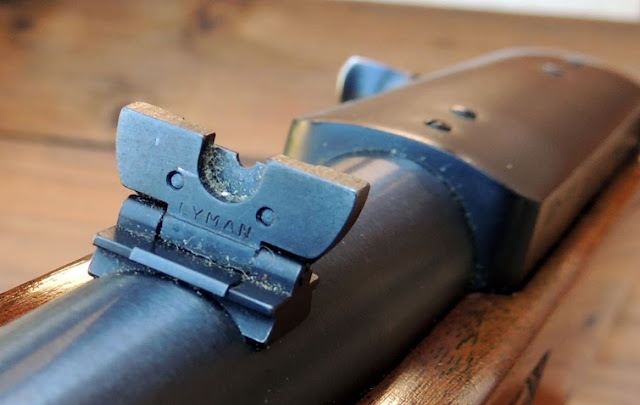 in 2008 Ruger created the Rimfire Challenge shooting event, which used 10/22 rifles. The event was turned over to the National Shooting Sports Foundation in 2014.

Olympic Arms once produced a stainless steel copy of the 10/22. Ruger's lawyers put an end to production 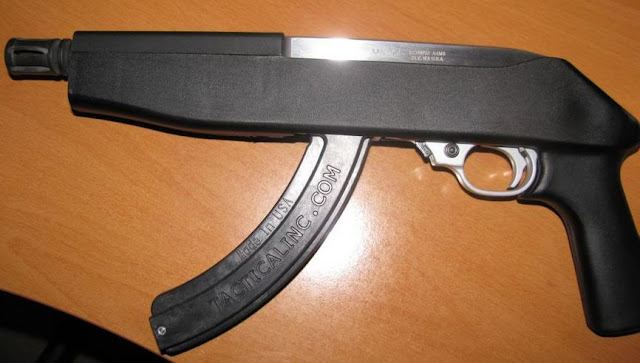 Most of the part numbers assigned to 10/22 parts begin with the letter "B". One of the only parts that doesn't start with a B is the trigger pivot pin, this is because it was borrowed from Rugers double action revolver line and rather than have two part numbers for the same pin, the part retained its revolver part number.

The receiver on the 10/22 Magnum model is made of steel instead of aluminum. It also had cast in scope mounts like the Model 77 & Mini 14 rifles. 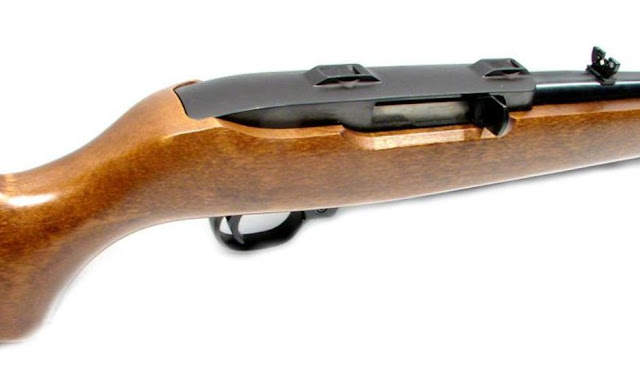 in 2014 Ruger introduced a factory tuned BX trigger as an aftermarket upgrade. 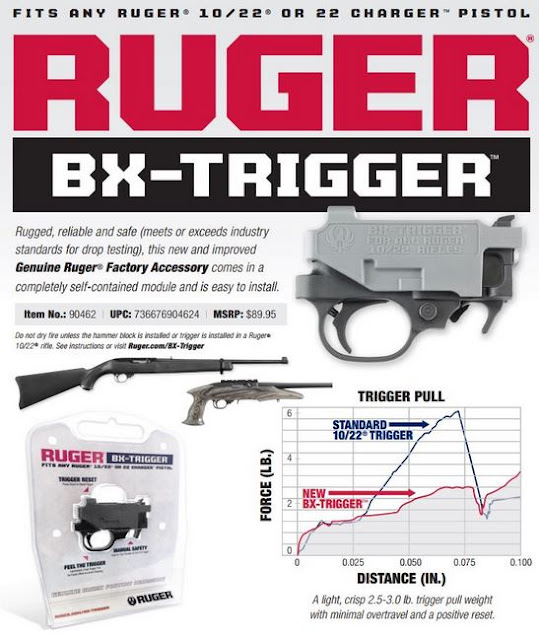 Counting all bolts, pins and screws, the current version of the standard 10/22 carbine (including the BX1 magazine) has 63 individual parts.

The 10/22 served with American Soldiers in Vietnam.

in 2012 Ruger introduced a take-down version 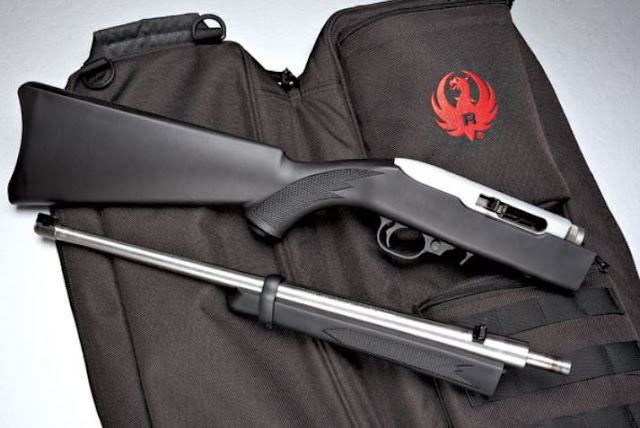 The 10/22 often called the "FBI model" (due to an FBI serial number prefix) was not ordered by the Federal Bureau of Investigation, but rather the distributor Fabor Brothers Inc., there were 1500 made in 1988.

In addition to the standard 10 round BX-1 magazine Ruger offers the BX magazine in 5 and 1 round capacities.

Some time around 2008, Ruger changed the finish on the receivers to a rough matte finish, it has since been changed back to a smooth, satin finish.

The Ruger 10/22 is not the best selling .22 semi-auto rifle of all time, that distinction belongs to the Marlin model 60. 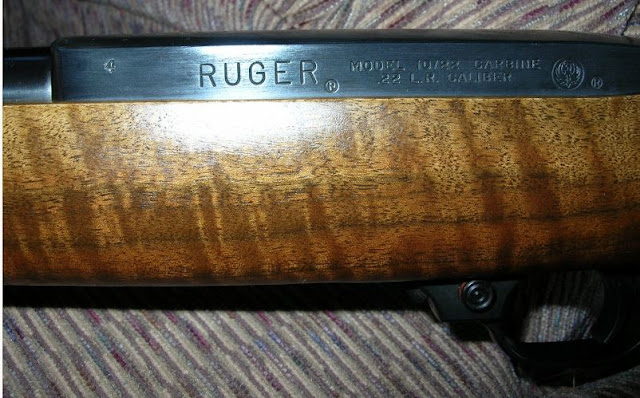 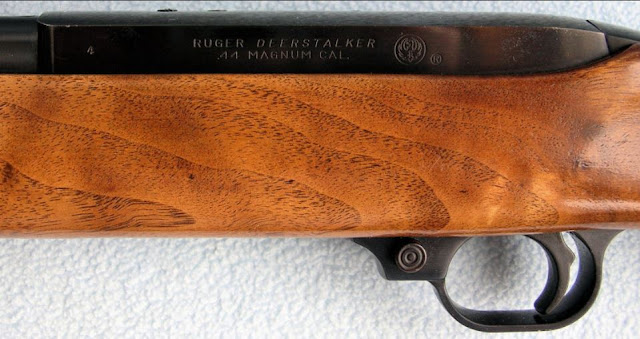 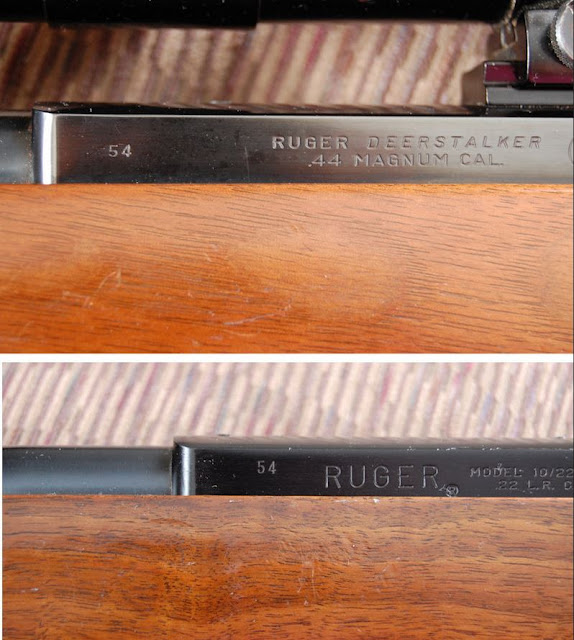 Magnum Research currently produces an apparent copy of the 10/22

The 10/22 is the most successful firearm ever produced by Strum, Ruger & Co. 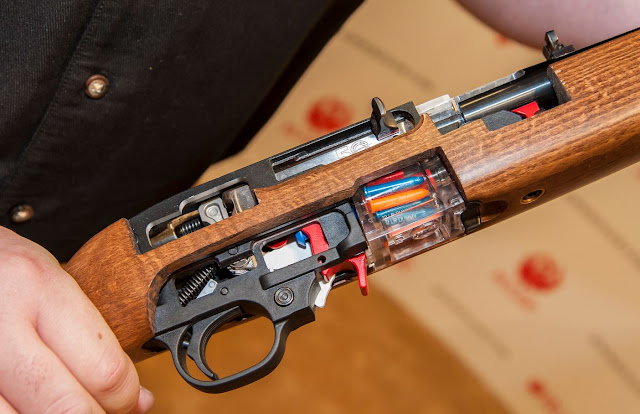