After the turn of the century electricity along with advancements in production techniques made manufacturing much cheaper and quicker. The result was an increase in gun makers and gun models.
One of the faster growing markets within the firearms trade was rimfire rifles. Many of these rifles were marketed to adults as varmint guns, but mostly to young boys. They were known as "Boy's Rifles".

The competition for this market was fierce. Some companies resorted to selling their rifles at steep discounts to manufacturers of feed or other products to be included as give-aways with the purchase of a bag of feed or seed. Companies like Hamilton, Marlin, Stevens, Mossberg, Iver Johnson, Winchester, H&R, Quackenbush and others competed for market share.

Remington would not be left out and in 1939 they introduced two new .22 rimfire rifles, the model 510 Targetmaster and the model 511 Scoremaster.

What followed was a series of rifles all based on the same platform. First we will examine what the rifles have in common, then we will take a look at each of these and explain the differences.

All of the "5-Teen" series rifles shared the same receiver and for the most part the same bolt.

The bolts were self cocking, featured dual extractors and a firing ready indicator that protruded out the end of the bolt when cocked. The bolts along with some other parts (trigger, safety lever and screws) were color case hardened. 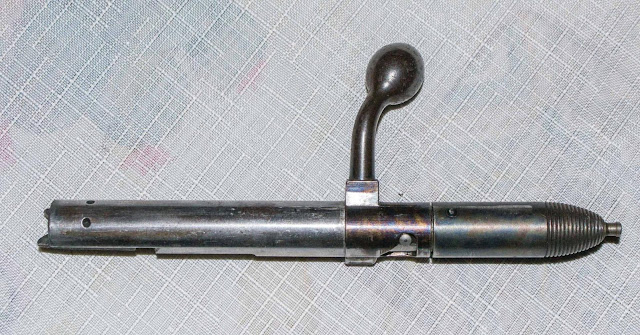 They also had dual locking lugs, a right side mounted safety and a grooved trigger.

The receivers were made from drawn steel rectangular tubing, which was much cheaper to manufacture than a forged one. 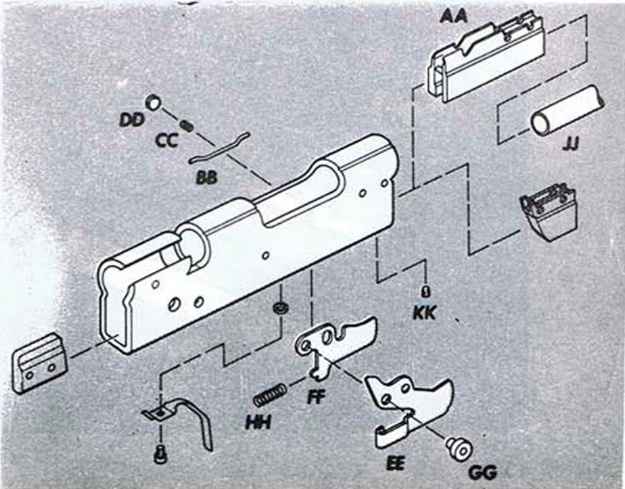 Lastly all of the guns in this series came with a full sized walnut stock. Date codes were printed on the left side of the barrel, just ahead of the receiver. For details click here 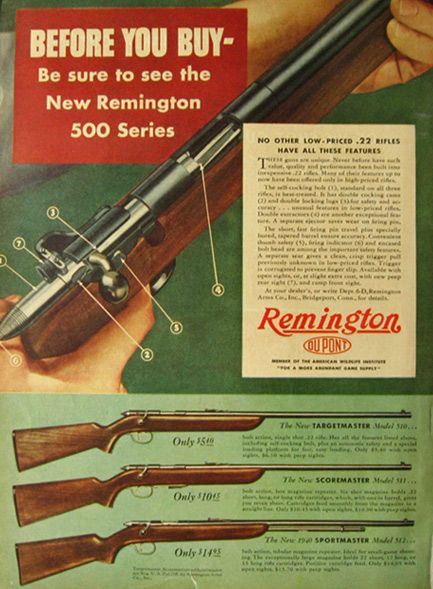 The 510 is a single shot, bolt action target rifle with a full sized walnut stock. The trigger guard was metal as was the butt plate (which was swapped for plastic after the war).

There were a several different variations of the model 510 produced including a Carbine, one with a chromed bolt and a smoothbore model called the MO-SKEET-O bore.

The model 511 Scoremaster was introduced the same year as the 510 Targetmaster. The difference was the Scoremaster was a repeater, having a box magazine of 6 rounds (originally) that sat almost flush with the bottom of the stock. Like the 510 there were multiple variations of the 511 including the 511P (for Peep Sight) and the 511SB (for Smooth Bore). As above the model was re-introduced for a short time between 1965 and 1967 as the 511X. Total production was 381,267.
Later on a ten round magazine was offered and aftermarket companies offered replacements in 6, 10 and 15 round capacities. 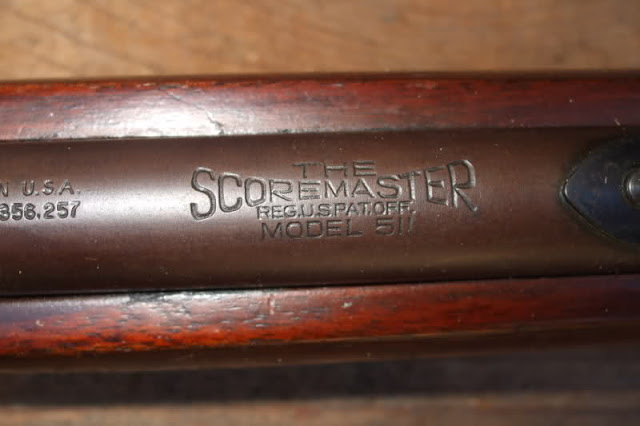 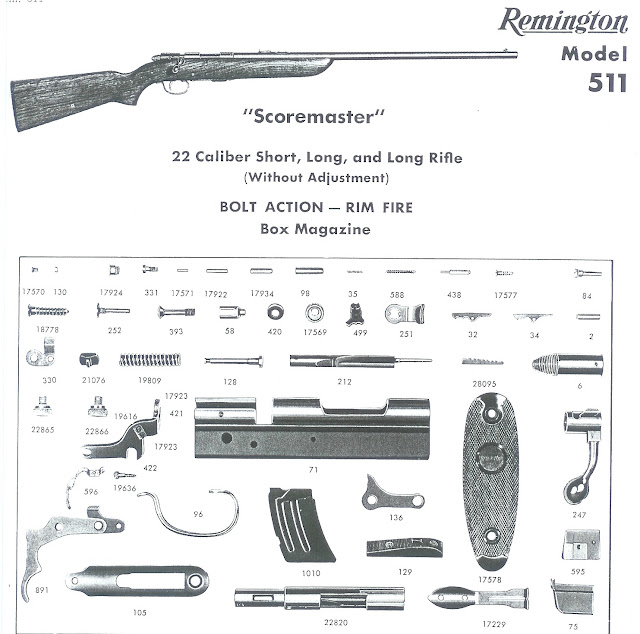 The model 512 was the same as the 510 and 511 except that it utilized a tubular, under barrel magazine. Introduced a year after his older brothers and manufactured until 1962. Like its brothers there were more than one variation including the model 512P (Peep Sight), 512SB (Smooth Bore) and the 512 X which was a reintroduction that was available from 1965 to 1967. 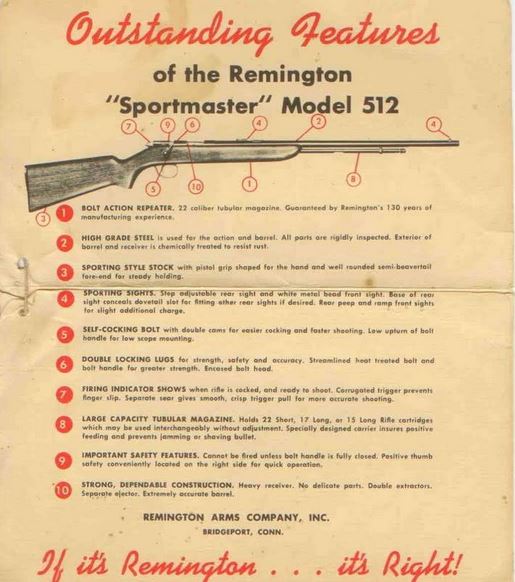 The 513T Matchmaster was introduced along with the 512 Sportmaster in 1940. The 513T was really just an upgraded model 511, using the same box magazine, but with a heavy barrel, target sights and a special walnut stock.

During its inagural year (1940) Remington received an order for 10,000 model 513T rifles for training purposes. These rifles were parkerized instead of blued and marked "U.S. Property". 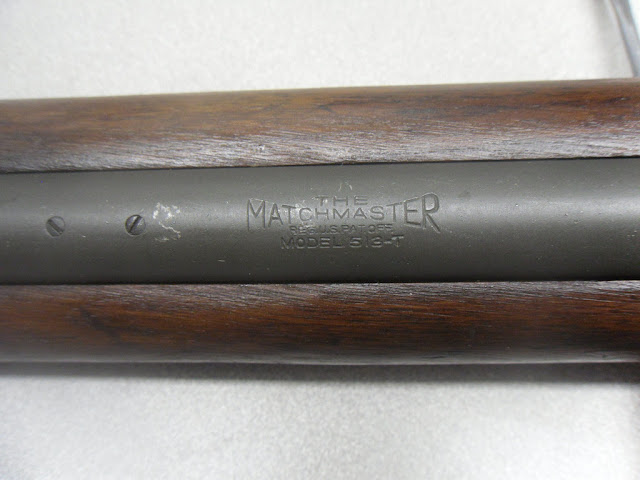 A year later in 1941 the 513S (for Sporter) was introduced. The 513S featured standard barrel, standard sights, blued finish and a checkered walnut stock. 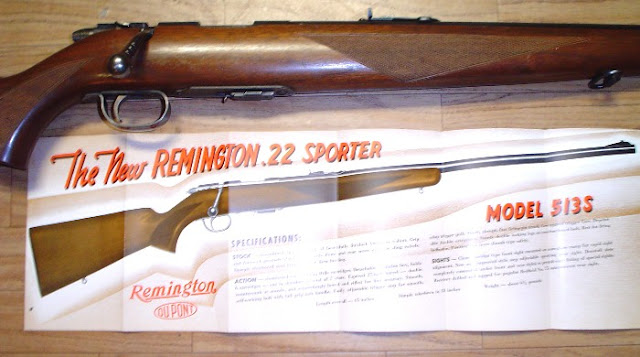 After WWII both variations of the 513 continued to be produced.
In advertisements, the "S" model almost always took a back seat to the more expensive and desirable "T" model. 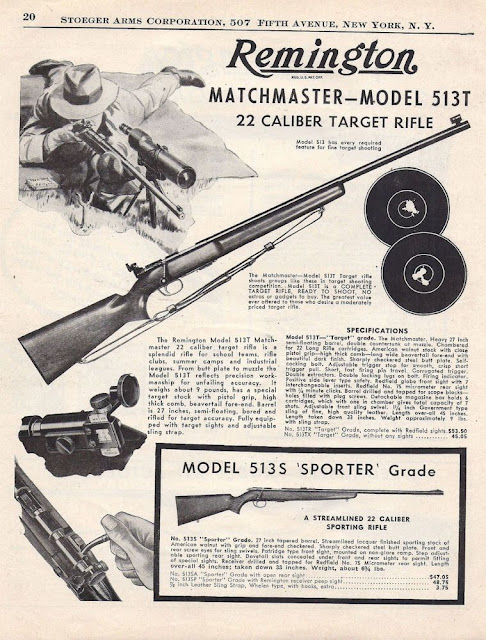 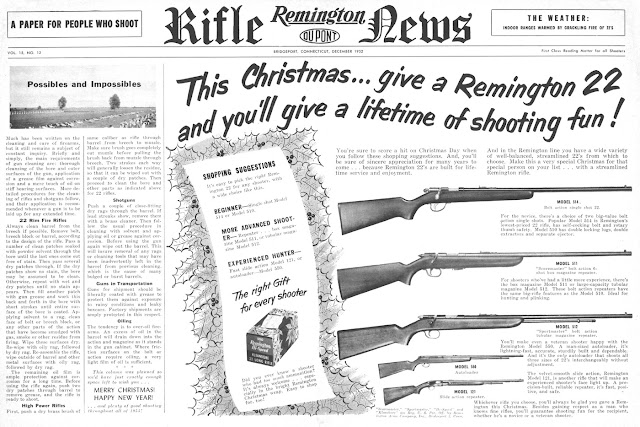 In terms of production numbers the model 510 was the most prolific with the model 513 the most rare, the chart below shows the specs of all 5 models 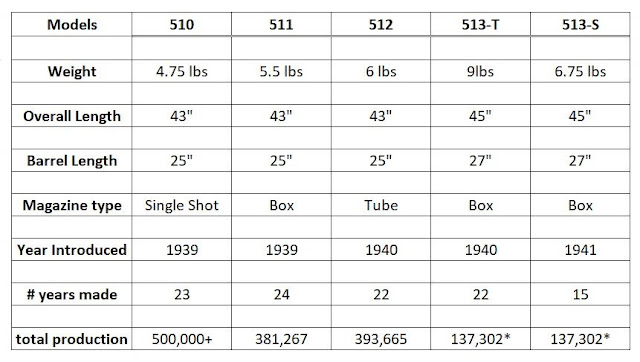 The most rare of all these guns has got to be the U.S. Property marked model 513T Matchmasters. Followed by the 513-S Matchmasters which were only made for 15 years and were not as popular as the 513-T.

Edit, it was pointed out to me that I missed one rifle, the model 521T/TL Junior Special, this was a modified version of the 513T 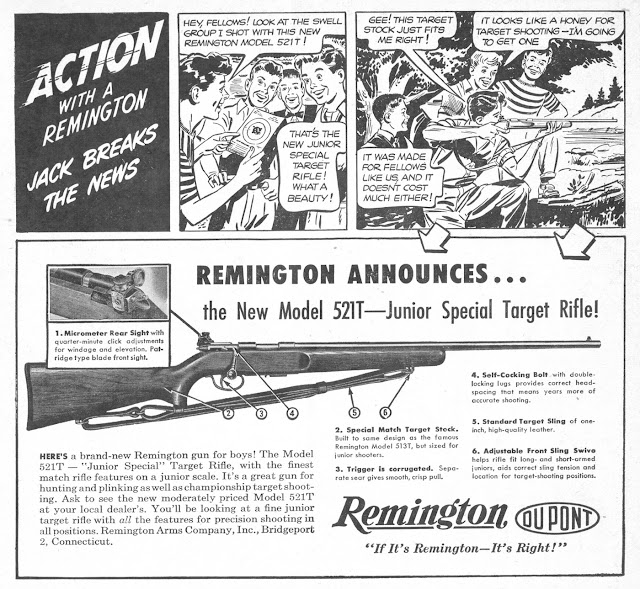 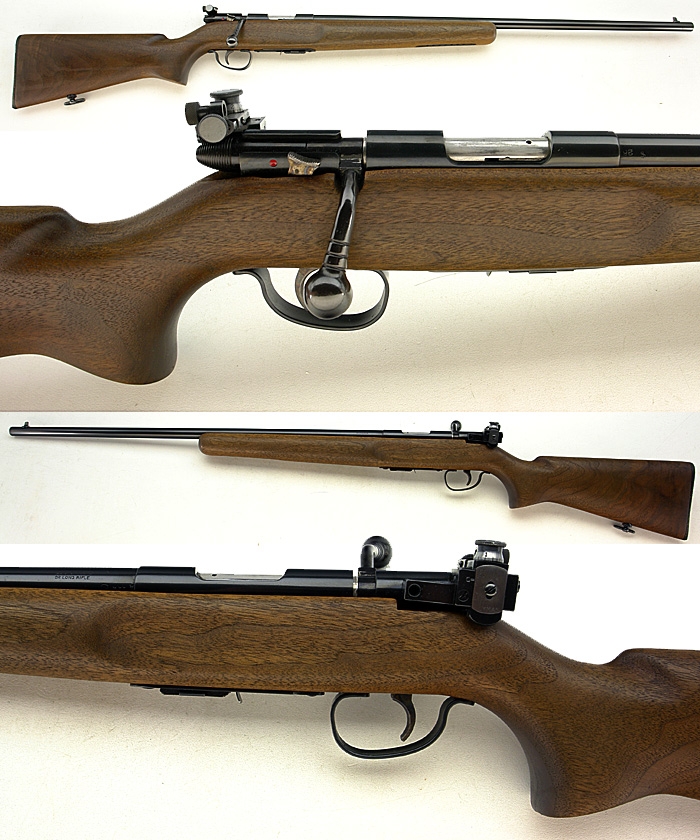 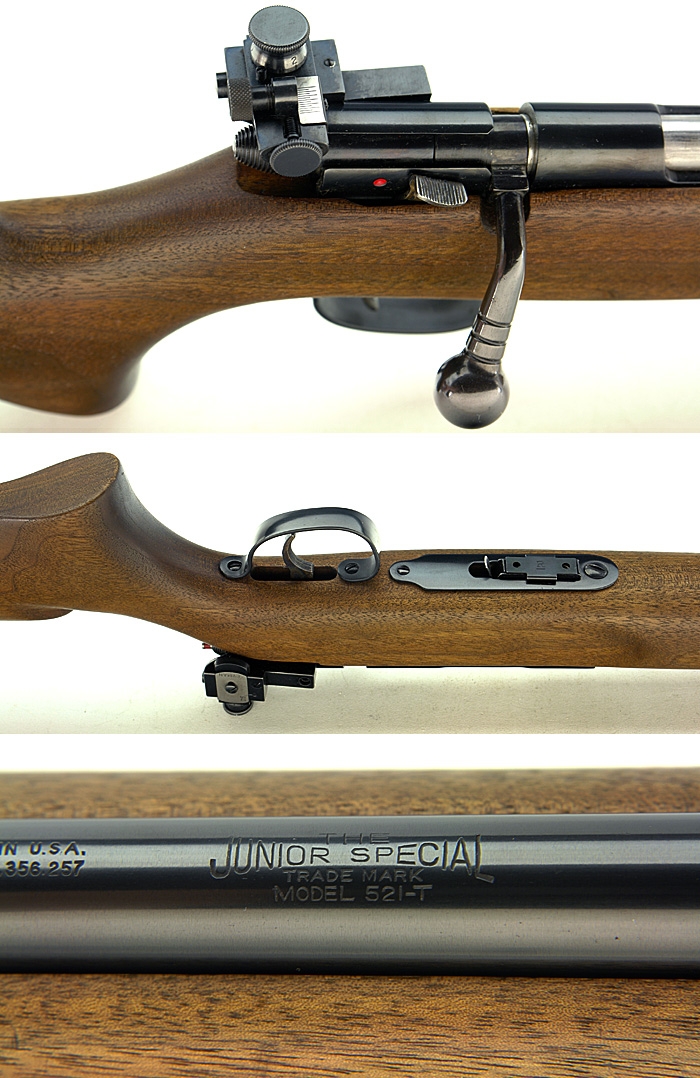 The Junior Special had most of the same features of the 513T,

As with most of my Featured Gun posts, they are inspired by guns I own or have come in contact with.

This 512 Sportmaster is owned by my brother, he bought it a while back and asked me to refinish it....look for posts on this project this month.

Then I refinished the metal on this model 511 Scoremaster, this is the finished product, look for a post on this one soon 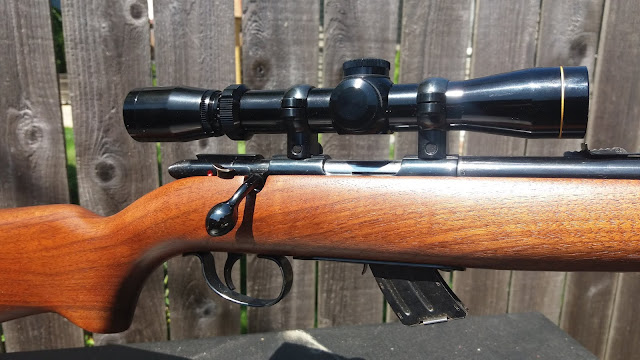 Then my Brother bought a third 512 (I think he is trying to corner the market)..

Then I was gifted this project, it is a 1946 vintage model 513-S Matchmaster....in pieces...another project.