How to write a Horrible Gun Ad


Foreword by  The Best of Armslist Tumblr

Armslist sucks. Gunbroker sucks. Backpage sucks. [insert region here] Gun Trader sucks. Your local gun store probably sucks. Why? Because people suck. Specifically, gun owners, trying to sell gun-related things, are typically:
completely ignorant of what their guns are or are worth
Or, as is usually the case on online gun classifieds sites:
I’m sick of that shit. You’re sick of that shit. Everyone who has ever had the pleasure of ordering a reasonably-priced Mosin Nagant or can tell you the difference in quality between a Bushmaster Carbon-15 and a BCM AR-15 variant is sick of that shit.


But Best of Armslist, how can we stop that?


Simple. We shame them. This blog is dedicated to the fudd, the mall ninja, the jackass who puts Tapco on FUCKING EVERYTHING, and every scalping asshole who has ever tried to sell a brick of .22 Remington Golden Bullet ammo for $150 and told you “get yours now before Obama bans it!”


The above statement tells of several stories, overpricing guns, misrepresenting guns, making up B.S., bait and switch profiteering, using incorrect pictures or just plain scams. They are unfortunately a part of the gun buying process.

I was originally inspired to author this post by an ad listed in a gun forum.....it caught my attention because of the caliber.....44 Mag always gets my attention. The ad had been up a while, but I don't think anyone bothered to respond, including me.

Then I found the Best of Armslist Tumblr page.....thanks to them and their readers for some great submissions.


So let's show you some of the ways to write a bad gun ad.

If you happen to be an author of one of these ads, please do not get upset, just read these as though some one else wrote them (this is called being objective) and I'm sure you will get a chuckle.


The ad that inspired me: 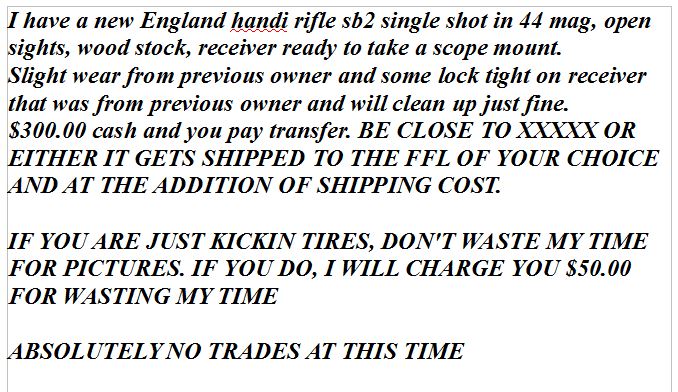 number one: The flagrant use of capitalization is great way to drive home your point and drive away potential buyers. It is the internet version of yelling.

number two: No pictures, but what is better? Threatening potential buyers with penalties for "tire kicking" if they ask for pictures...pure awesomeness!

number three: Not cleaning up a mess on the gun and then telling prospective buyers that "it will clean up easy" is a sure fire way to make potential buyers ask the question: "why didn't he just clean it up then?".

number four: Don't go out of your way to sell a gun, screw the buyer! He can drive to your out of the way neighborhood if he wants the gun, flexibility is for Yoga.

number five: The art of bullying is not lost on you! I can really feel the angst....weaving your emotion into the words is not easy to do...I smell a Pulitzer........or maybe it is last nights burrito....

This is an excellent way to drive people crazy. They say a picture is worth a thousand words, but what is a crappy picture worth? At least a few.....

Look at the picture below, I'm not sure if that is a shotgun or one of Sméagol's limbs.
The lack of focus and the messy background tells us the seller probably inherited the gun from his dear old grandfather and is selling it to buy more of the drugs that were responsible for the apathy and shitty picture. 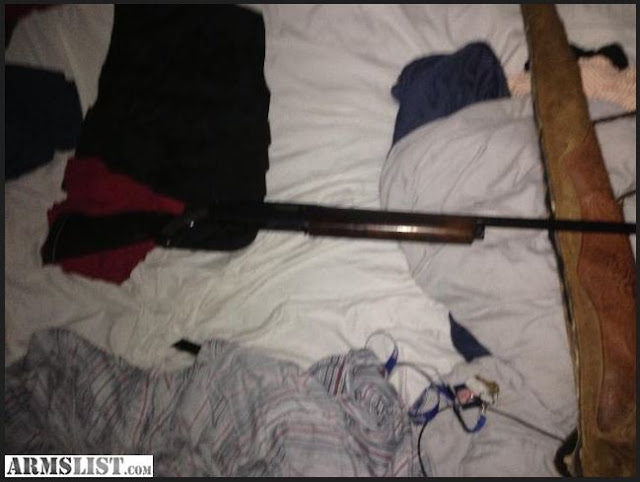 Keep 'em guessing by leaving your dimly lit, out of focus picture rotated in the wrong direction 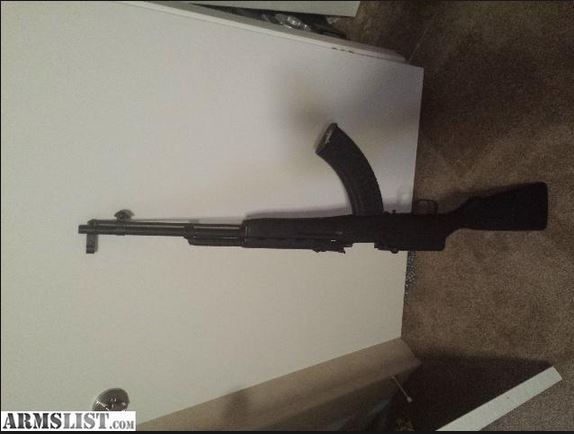 Here is another masterpiece, not cleaning up for the photo sends the message about how you live your life, after all who has the time to clean and care for a gun, you have to find your other Air Jordan.

If I were an LEO, I would see a teenage thief who stole these weapons and is trying to sell them before the PoPo catches up with him.... 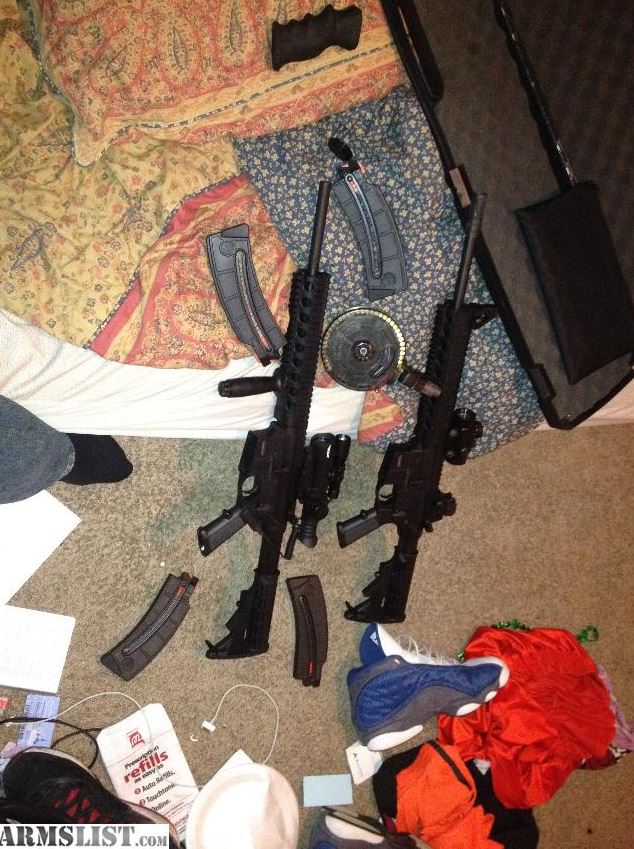 Including other items in the picture that don't come with the gun is a genius level move. Entice them with 1/3 a gallon of delicious Diet Ice Tea... 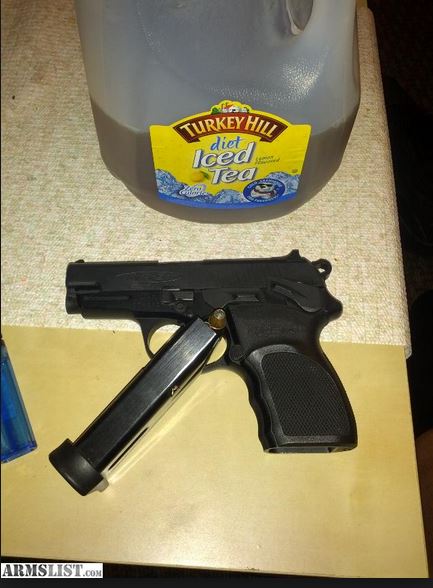 Or your girlfriend's ass...Is this how Pimps sell their guns? 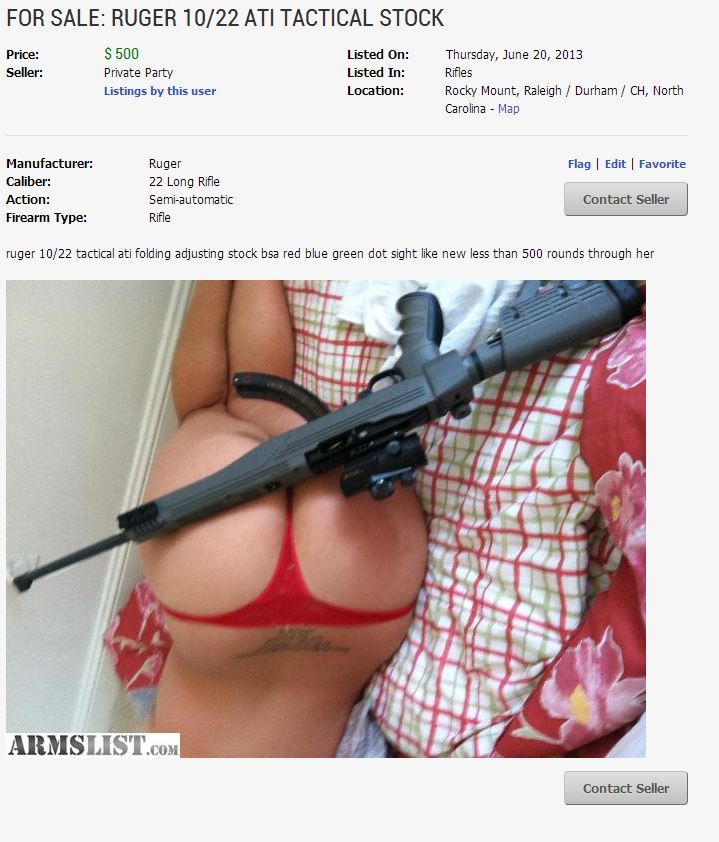 Creating fiction for your gun ad is great, it shows your improvisational skills. Call it "creative license"!

Who cares that a Glock is a locking recoil operated gun and the Hi-Point is blow-back operated, the fact that you used the Glock name in the ad tells the buyer that you know your shit, oh yeah and great job on the spelling, grammar and inflammatory name for an LEO.... it gives you street cred...keep it real homey! 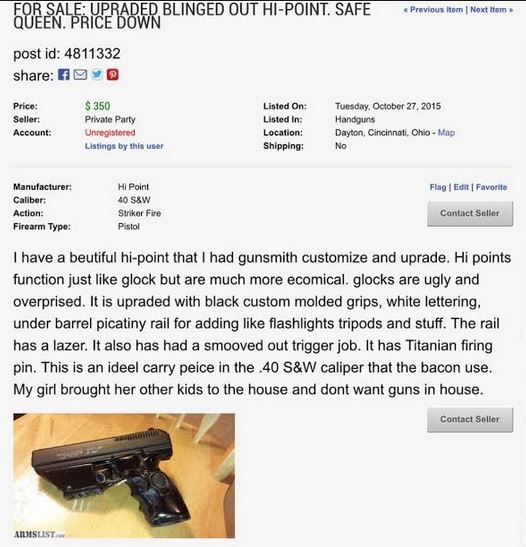 Become another SKS expert, everyone knows that Sergei Gavrilovich Simonov was Chinese and he built his gun to compete with Kalashnikov's rifle 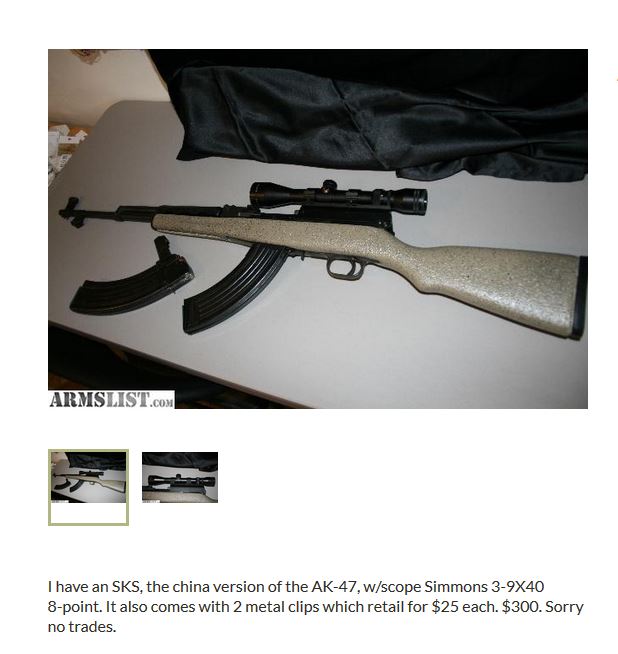 Move up a grade or four:

Don't let the NRA or Kjestad influence you, you grade the gun how you see it. Who cares if your gun looks like it spent a couple of hours in a cement mixer, after all beauty is in the eye of the gun owner, right? 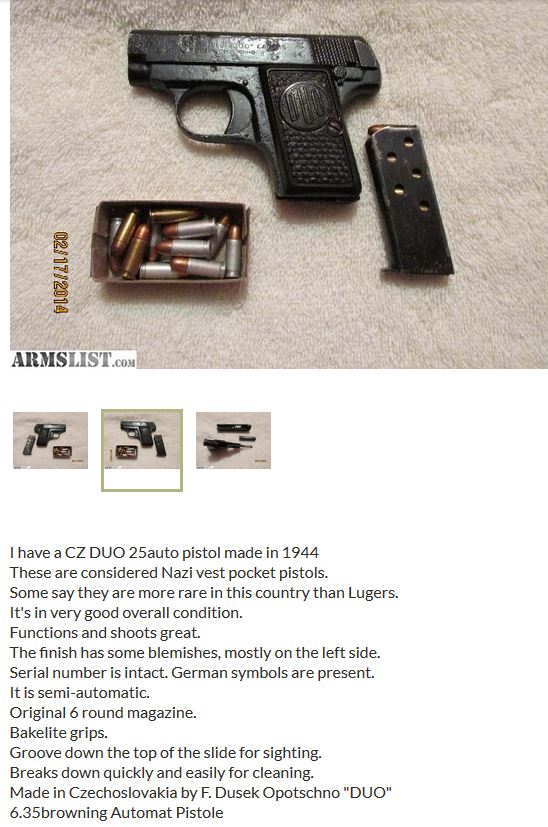 Let potential buyers know that your gun is "off the radar".
Extra points for guns without serial numbers....
You may even want to let buyers know that the gun is so far undercover, the previous owner doesn't even know it is missing yet.... 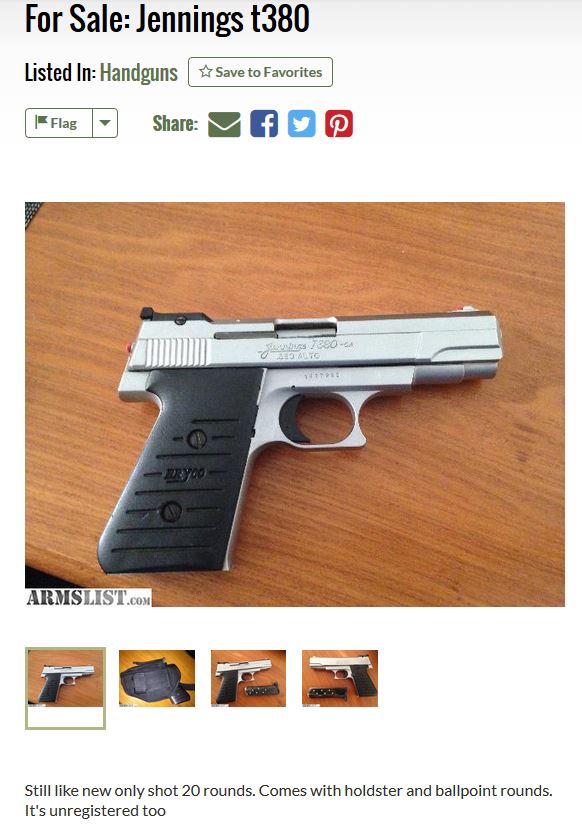 Everyone who knows anything about guns would like to buy a Colt Python....so by advertising them in another state and saying you will only ship, no "face to face" sounds super sketchy...Then you say you will ship the gun super secret, "off the books"....you might as well be giving out free candy in your 1978 Dodge Tradesman Van 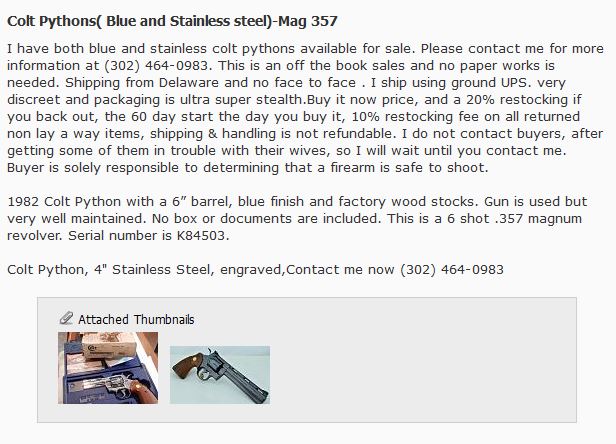 Make up your Price:

Hey, it's your gun, don't let the market dictate what your gun is worth....there is no other gun owner like you, therefore your gun is unique and should be priced accordingly. 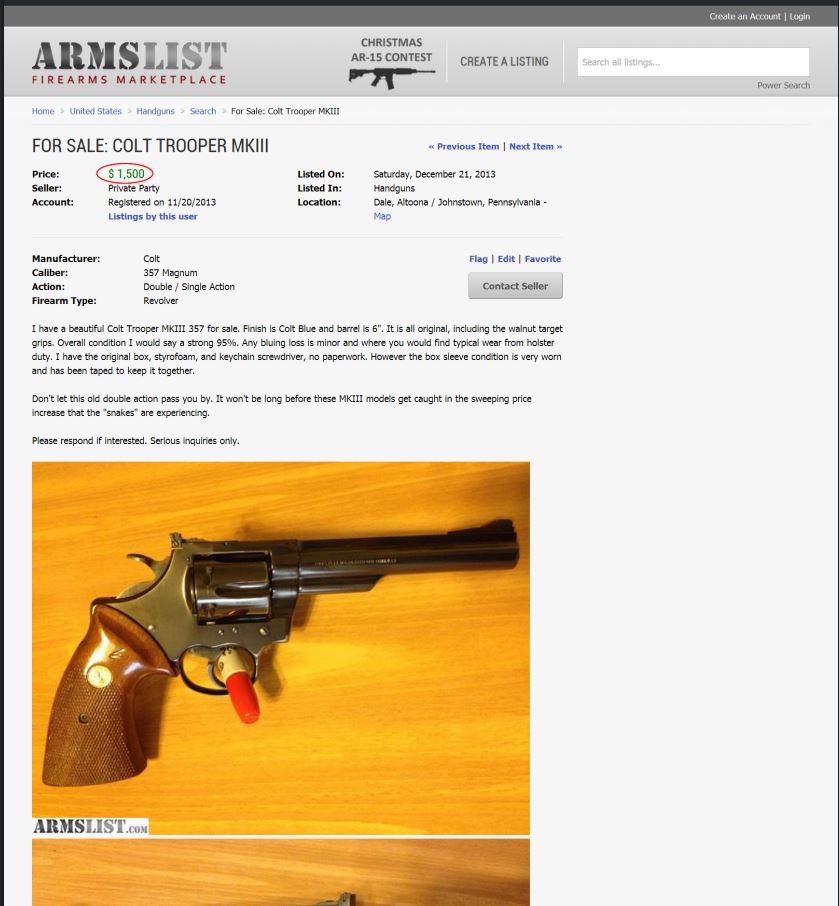 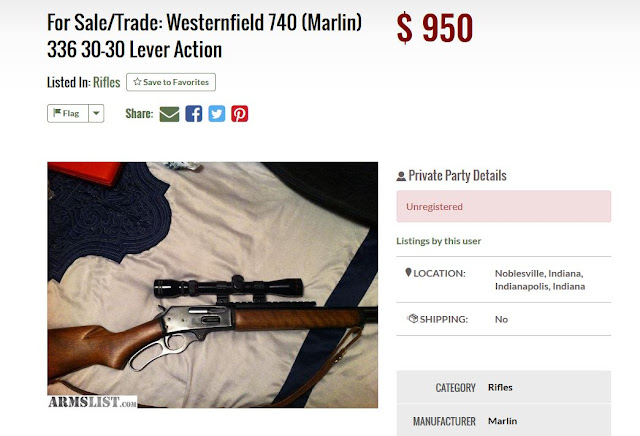 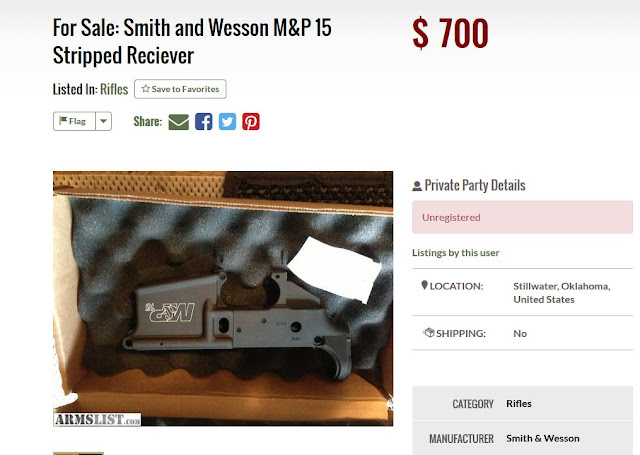 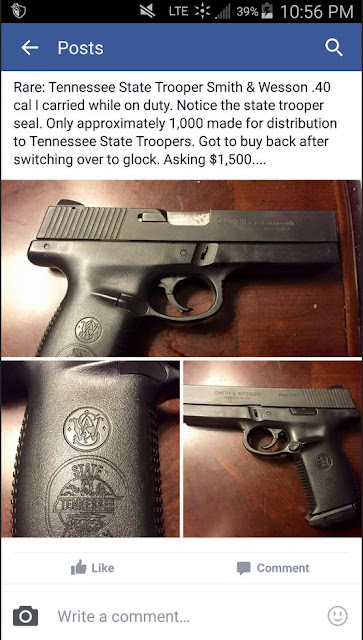 and make sure to take advantage of your buyers when the panic hits.... you were here first, get what you got coming! 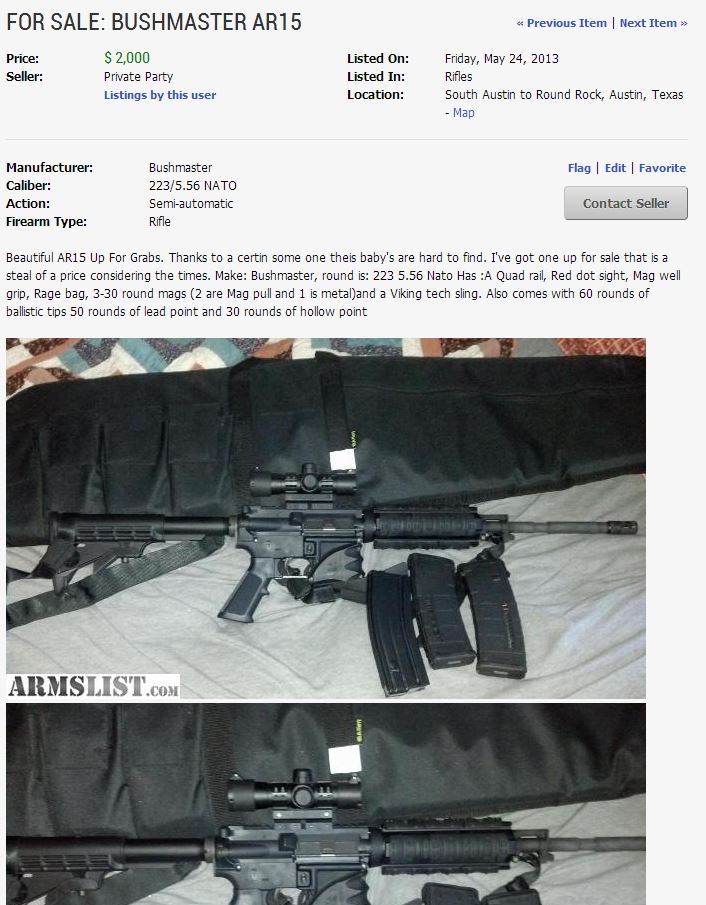 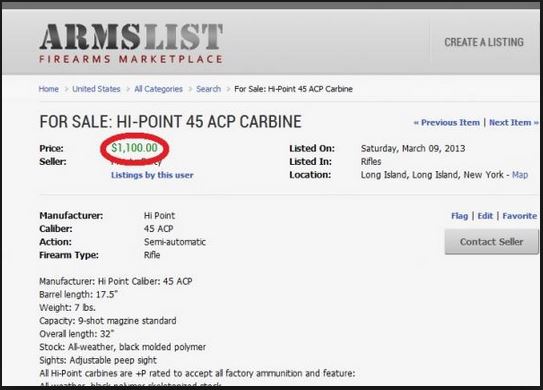 A perfectly legitimate tactic to drive traffic to your ad: You put "FREE" in the headline.... 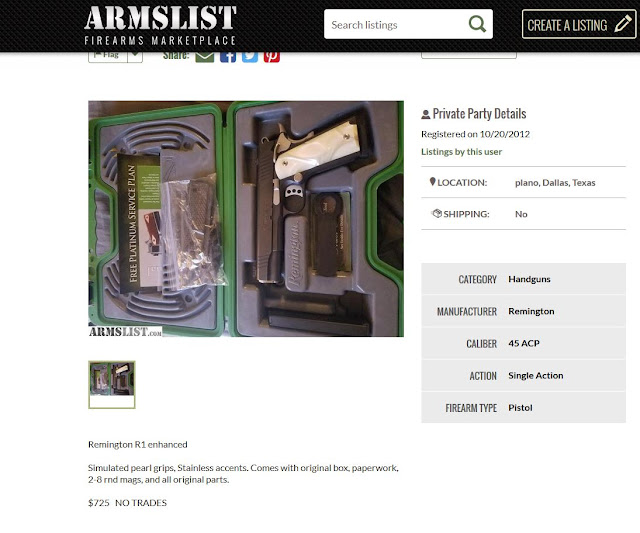 This tactic seems to be popular.....I also like the ambiguous quantity of non-existent free Mosins...how much is "about a dozen" anyway? Who cares? Keep them guessing! 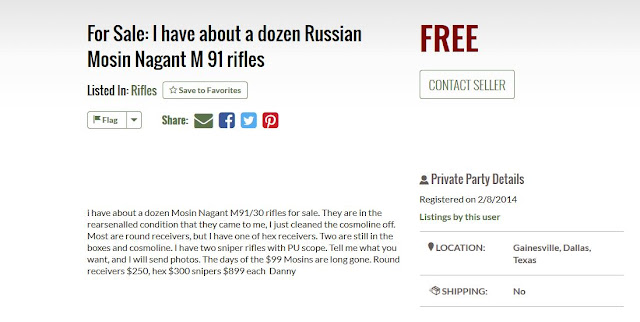