Firearm Factory of the Month: Hawken

The story of the Hawken Rifle, the factories in which they were built and the men who built them is really the story of America itself.

The 1820's in America was a time of new hope. The west was opening up after the purchase of the Louisiana Territory (made in 1803). The War of 1812 was over and the canal and railroad boom was well underway.
Manifest Destiny was the belief that the westward expansion of America was both just and inevitable.
At the time St. Louis, Missouri was the gateway to the west. St. Louis sits on the western bank of the Mississippi and was, for quite a time, the last large city before the frontier.

During the 1800's St. Louis merchants made a healthy living selling goods to those heading out west. This included guns, lots of guns. For surviving in the west, almost without exception, required the use of a firearm. Weather it be for securing your dinner or securing your property and loved ones from wild animals, highwaymen or Indian attacks, a firearm was a necessity.

The three Hachen (now Hawken) brothers Niclaus, Wolfgang and Christian left Switzerland in 1850 heading to Philadelphia. They later settled in Hagerstown, Maryland and opened a gunshop. The three brothers having been trained in gunsmithing in Europe.

The brothers soon settled down and married local women. Niclaus and his wife gave birth to a boy and named him for his uncle Christian.
Christian was raised in the gun business and later had a family of his own, including five boys.
Two of those boys, Jacob and Samuel are the subjects of this story.

Jacob and Samuel's Father Christian Hachen (now Hawken) had been in the business from about 1785 to about 1808.
After being raised in the gun business the two brothers worked at the Harper's Ferry Arsenal before moving out west. Samuel to Xenia, Ohio and Jacob to St. Louis, Missouri. The other three Hawken boys remained in Maryland and continued their family's gun business.

It was in 1821 when Jacob & Samuel Hawken's Father died in their hometown of Hagerstown, Maryland. Samuel left his home in Ohio to help the family. Early the next year Samuel's wife died. With nothing for him in Ohio, he headed to St. Louis to work with his brother.

Samuel arrived in St. Louis in early June of 1822. He set up a shop on the levee near Cherry Street. A short while later he opened a new shop, also on the levee, but along Olive Street.

In 1825, after Jacob's business partner died, the two brothers decided to join forces. They opened a new gun factory at 29 Washington Street. During the 1830's and 1840's they made some of the finest rifles available.
The rifles were different than their "Kentucky Rifle" cousins in that they featured shorter barrels (for work in the woods) and larger calibers (to handle the bears and other large animals encountered in the west).

The guns are now highly sought after collectibles.
As you can imagine, there is a lucrative business in faking an original.
The Map below shows the locations of the various Hawken factories in St. Louis. 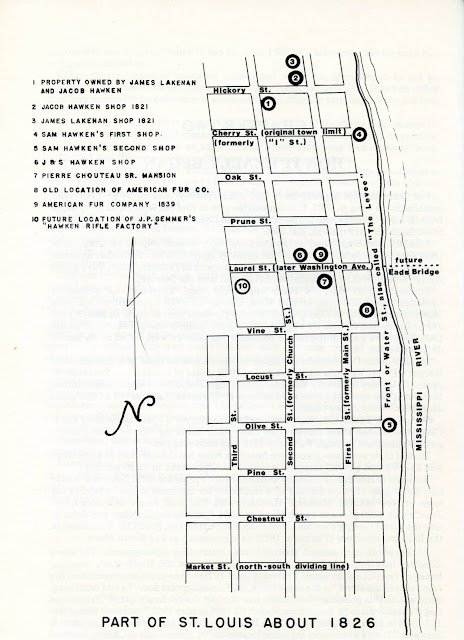 On the 9th of May, 1849 Jacob Hawken died of Cholera. Samuel continued the operation with his son and long time employees. In 1850 the city of St. Louis performed a census of their businesses, Samuel Hawken replied with the following:

It was also noted that all work was performed by hand. This was also noted as the best year for production, no doubt helped by the 1849 Gold Rush. The "49'ers", as they were called, were headed for the hills in Northern California and many stopped in St. Louis for supplies before heading west.
In 1855 Samuel Hawken, now 63 turns the reigns of the company over to his son William, who, just like himself and his father before him, was raised in the gunsmith trade. William took on a partner, fellow employee Tristam Campbell. A year later the partnership was dissolved and William continued in the business.

In 1859, Samuel and William leave for Denver, the operation (but not ownership) of the shop was turned over to an employee by the name of William Watt.

In 1861 Samuel returned to St. Louis and within a year he sold the business to John Phillip Gemmer.
Gemmer was born in Germany and trained in gunsmithing at the Government Arsenal at Booneville, MO and then in Hawken's shop. 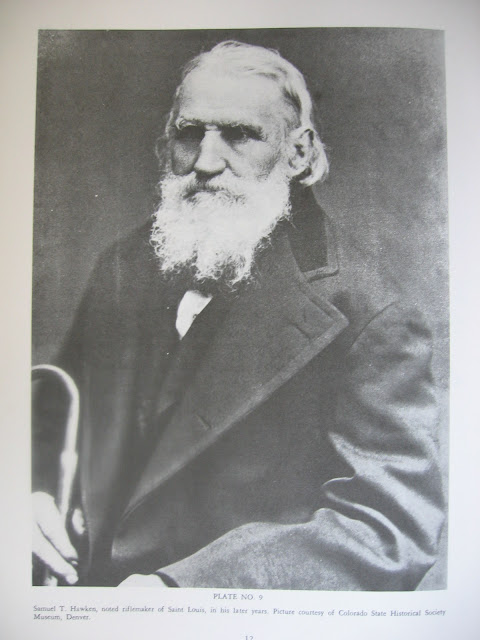 In 1870 Gemmer relocated the gun business to 600 North 3rd Street. It can be seen below in this picture from circa 1874-1876. Laurel street, shown in the photo, spans the Mississippi River via the Ead's bridge, which was finished in 1874. 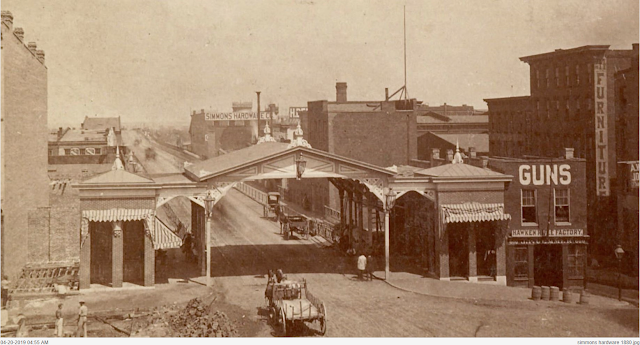 The gun shop later became a tavern named "What Cheer" 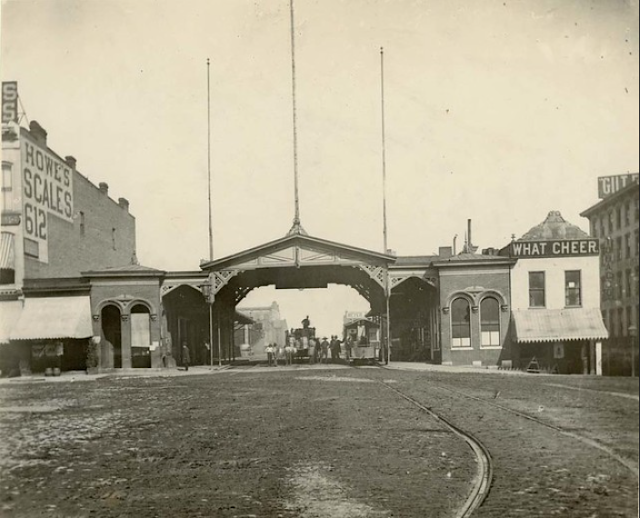 On the anniversary of his brother's death, Samuel Hawken dies at the age of 91.

In 1912 the factory moved for its last time to 817 8th Street. In 1915 Gemmer closed the business, probably due to lack of sales of muzzle loading rifles.
John Gemmer died in 1919. The remaining tools and equipment were sold off, many of which still exist and some are still being used to create rifles.

The Hawken rifle was praised (and still is) by frontiersmen. It was owned and favored by the likes of Hugh Glass, Kit Carson, Buffalo Bill Cody, Jim Bridger, Teddy Roosevelt and Daniel Boon.
Today the originals go for a beaucoup quatloos and virtually every maker of a muzzle loading rifle has a Hawken tribute model in their catalog.

The area of town in which the gun factories stood is now occupied by Interstate 44, America's Convention Center and Sports Complex and the Gateway Arch Park. 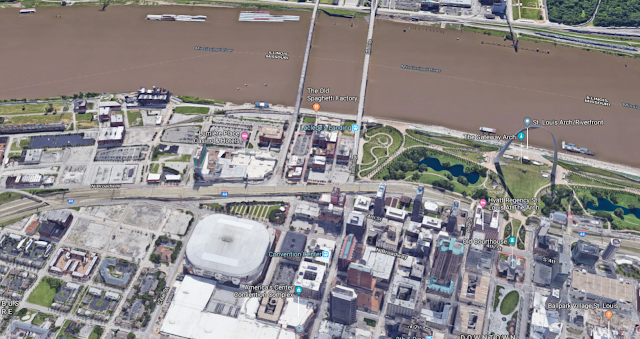 Due to the nature of his death (cholera) Jacob Hawken was "buried" (not sure what that means exactly) in the Mississippi river and his belongings were burned.
Samuel Hawken is buried in Bellefontaine Cemetery in St. Louis, a picture of his famous rifle adorns his head stone 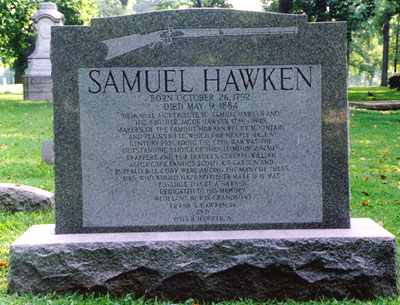 Center of the West