So I decided to go all in, I had a friend of mine make me a bluing tank, I used the dimensions of the one Brownells sells. 40" x 6" x 6". He added a propane element from a BBQ, He did a great job, check it out:

Here is some pictures of the chemicals I use: I have been buying the Sodium Hydroxide from The Essential Depot (http://www.essentialdepot.com/), it comes in 2 lbs containers 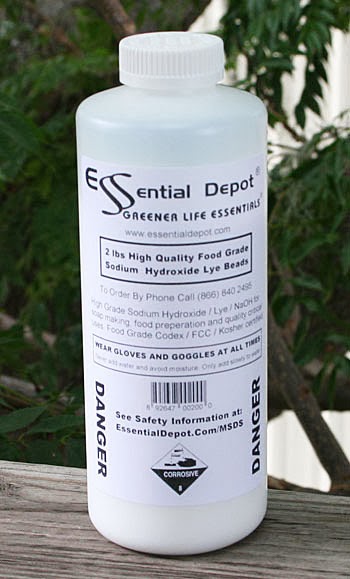 I used to buy the Sodium Nitrate from nursery supply places, also called Nitrate of Soda, it comes in 4lbs bags 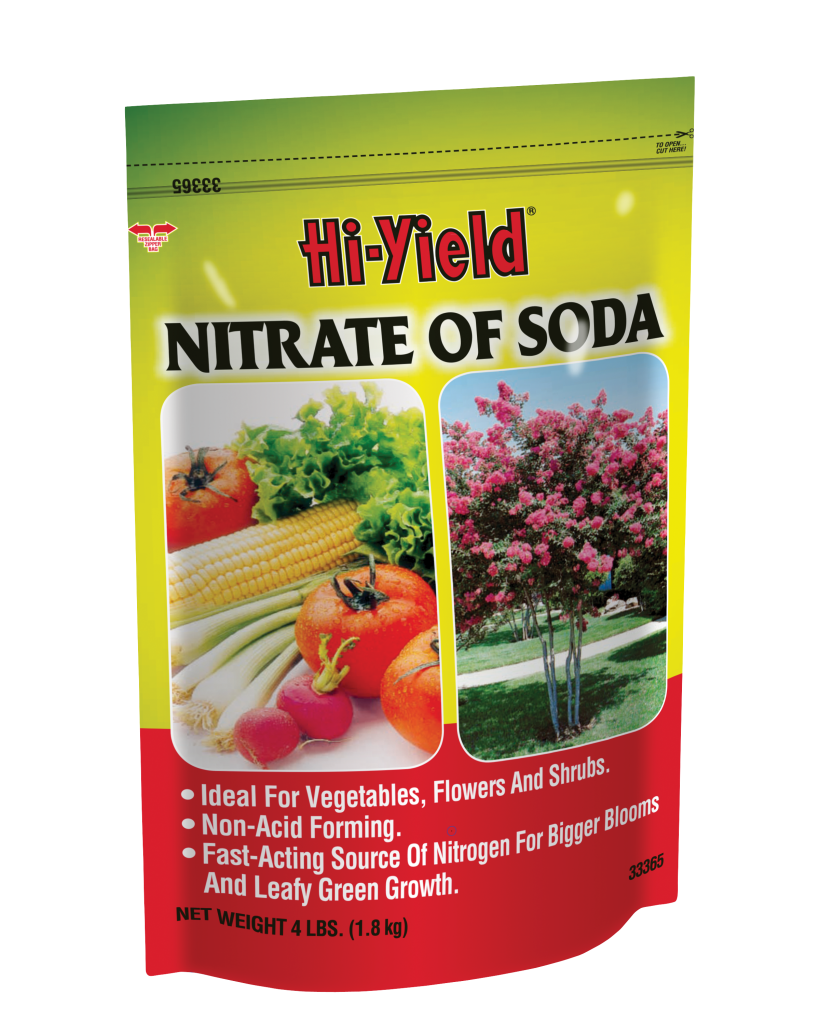 The suppliers have really increased their shipping costs, making it too expensive to buy online. Luckily I found a local pottery supply house that sells industrial grade sodium nitrate in 50 lbs bags, much cheaper to buy in bulk 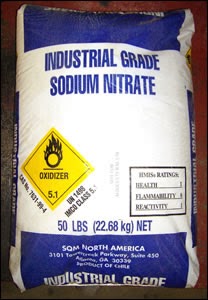 The ratio of Sodium Hydroxide (lye) to Sodium Nitrate is 2 to 1, so I usually use 12 lbs of lye and 6 lbs of sodium nitrate along with 1 to 2 gallons of distilled water. The amount of water is not important, the temp will be determined by the amount of water, too much water and the temp will not be hot enough, too little water and the mixture will overheat and ruin the gun finish

So I needed a project or two to get some experience. I posted an ad on my local gun forum offering free rebluing to anyone as long as they did not complain about the results. Many of these people had seen my work before and had faith in me. I had more responses than I could handle.

One guy contacted me and practically begged me to help him with his new rifle. He was getting into Cowboy Action Shooting and had purchased a new Marlin 1894 Cowboy, he got a deal on it because the original owner had left it in the original Styrofoam container......DON'T DO THIS, I have seen several guns ruined by styrofoam...

Anyway, here is what it looked like when he brought it to me:

Note: if you click on the pictures you can see a larger version 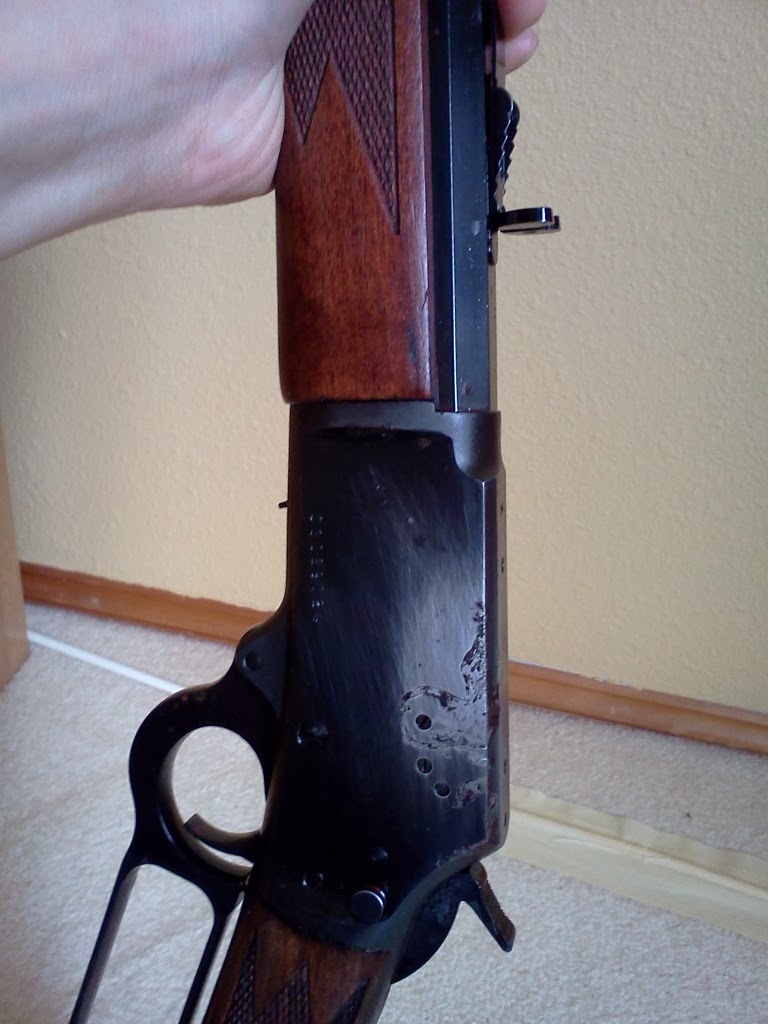 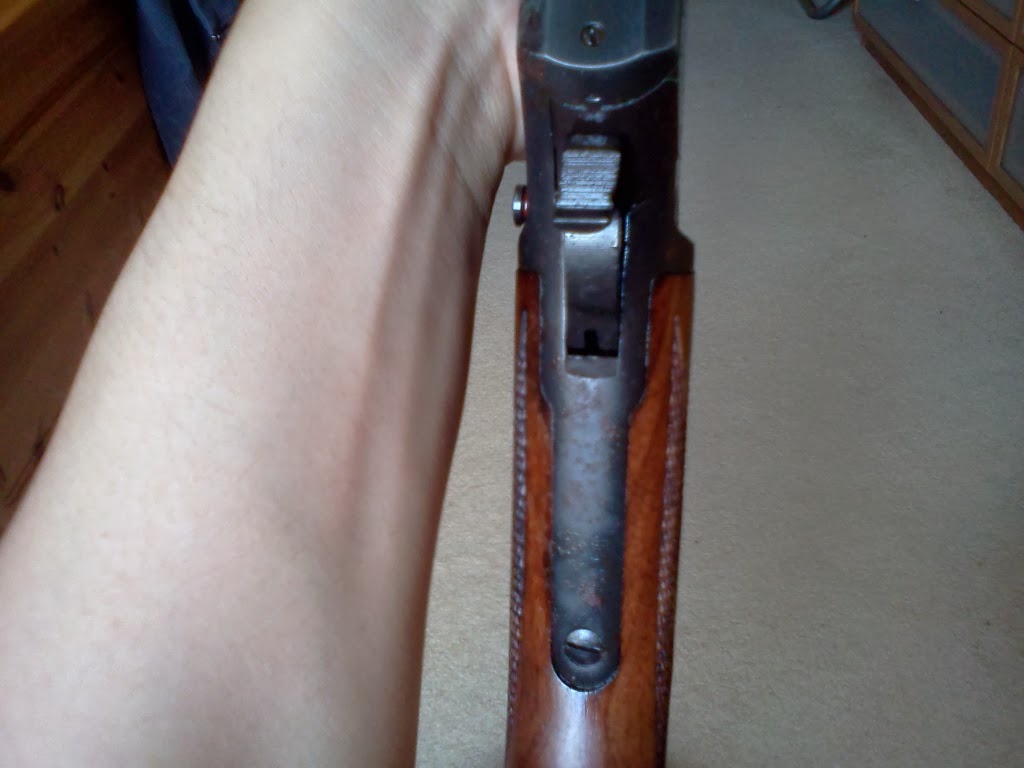 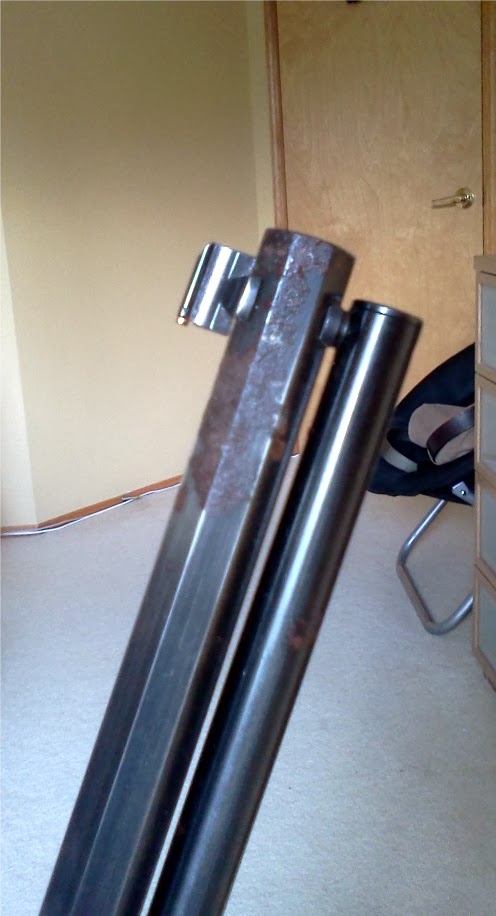 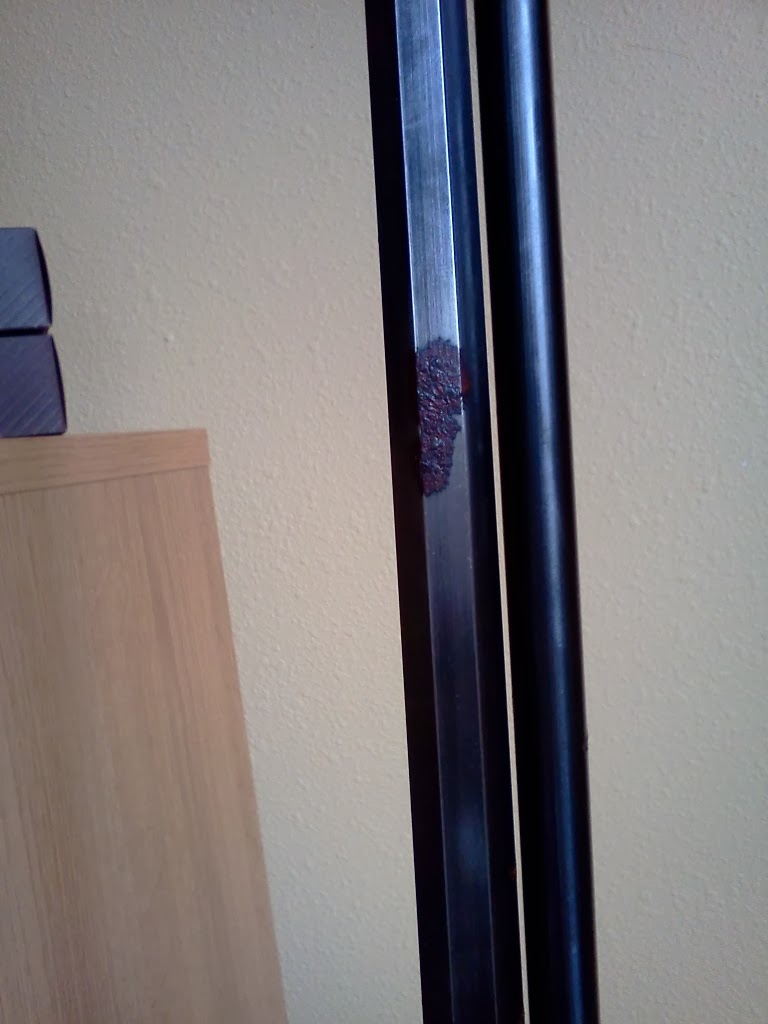 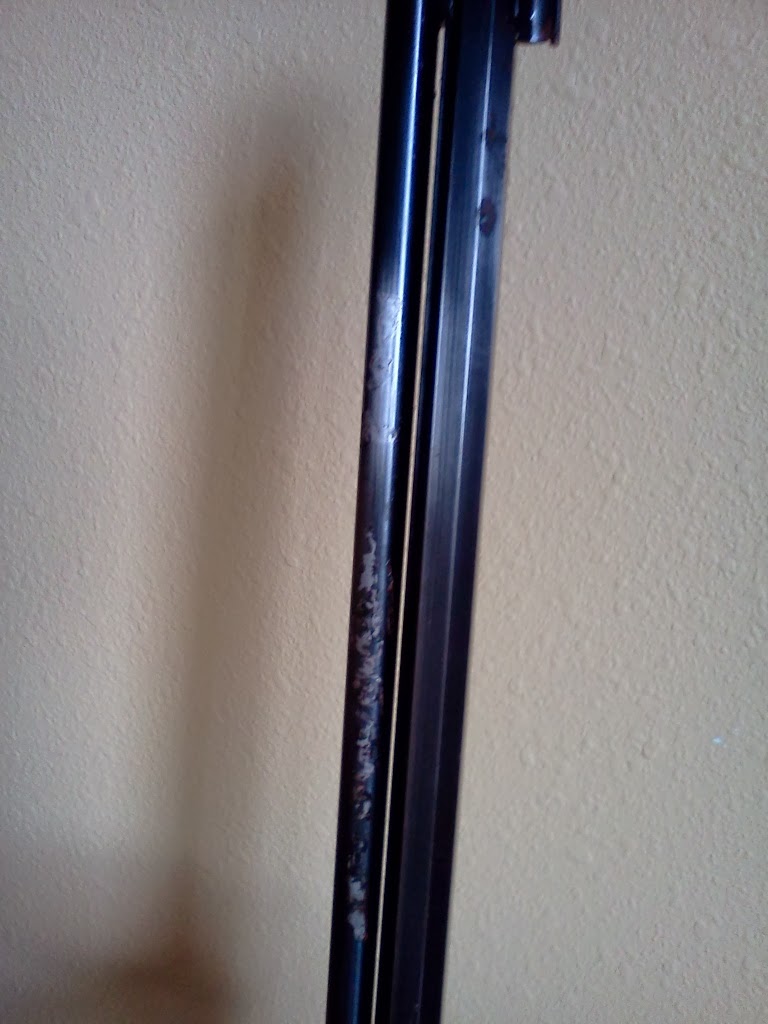 My first step was to strip the gun, I then began with the barrel, being that it was octagon and tapered, it made it easy to file and hide how much metal I was removing. I used the "draw-file" technique. You need to constantly clean the file and barrel to prevent mental chips from gouging the metal. 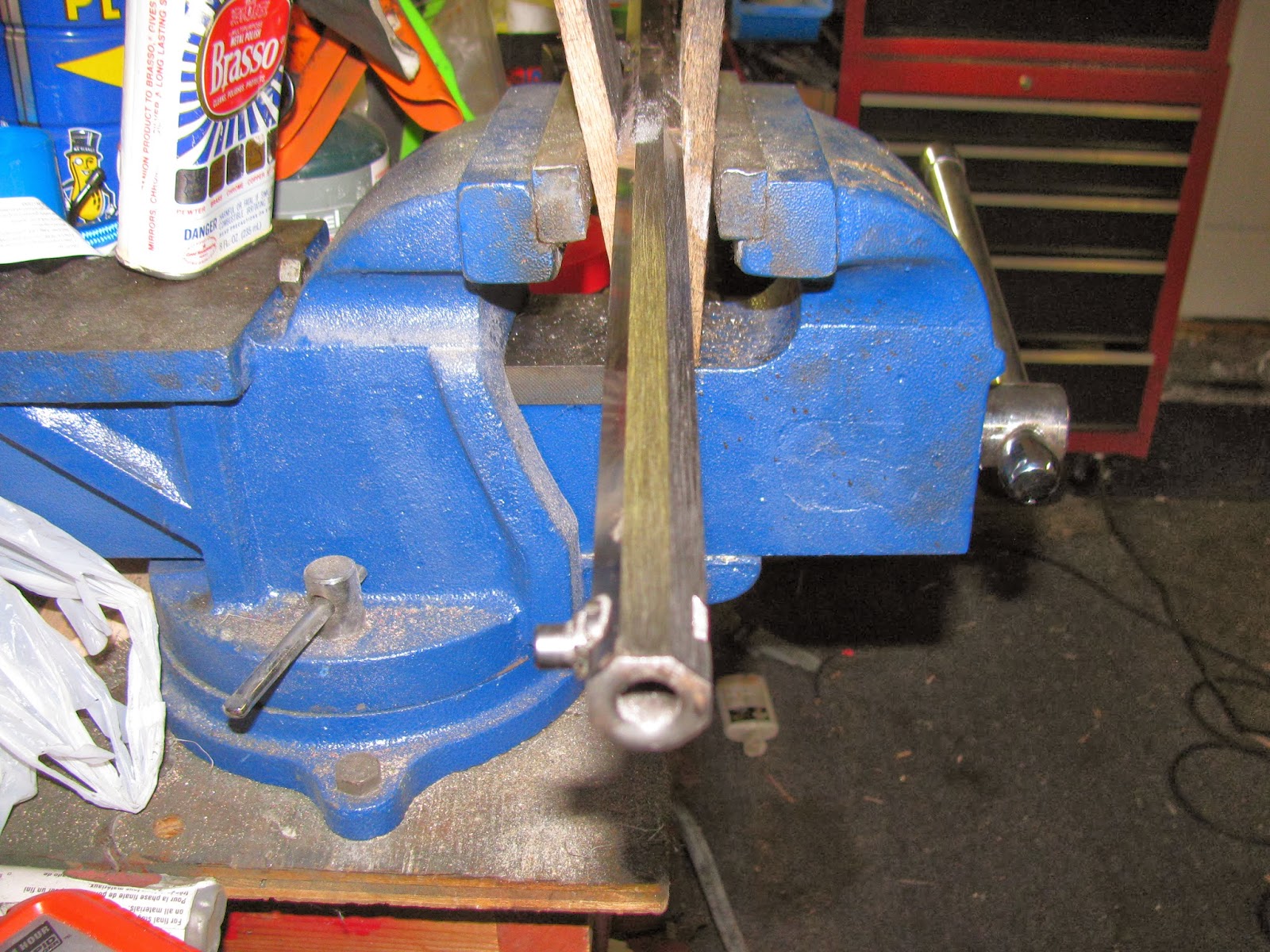 Once I had the barrel close, I started on the receiver.  I quickly discovered the receiver was not flat, but slightly concave. That combined with the close proximity of the serial number made filing very difficult 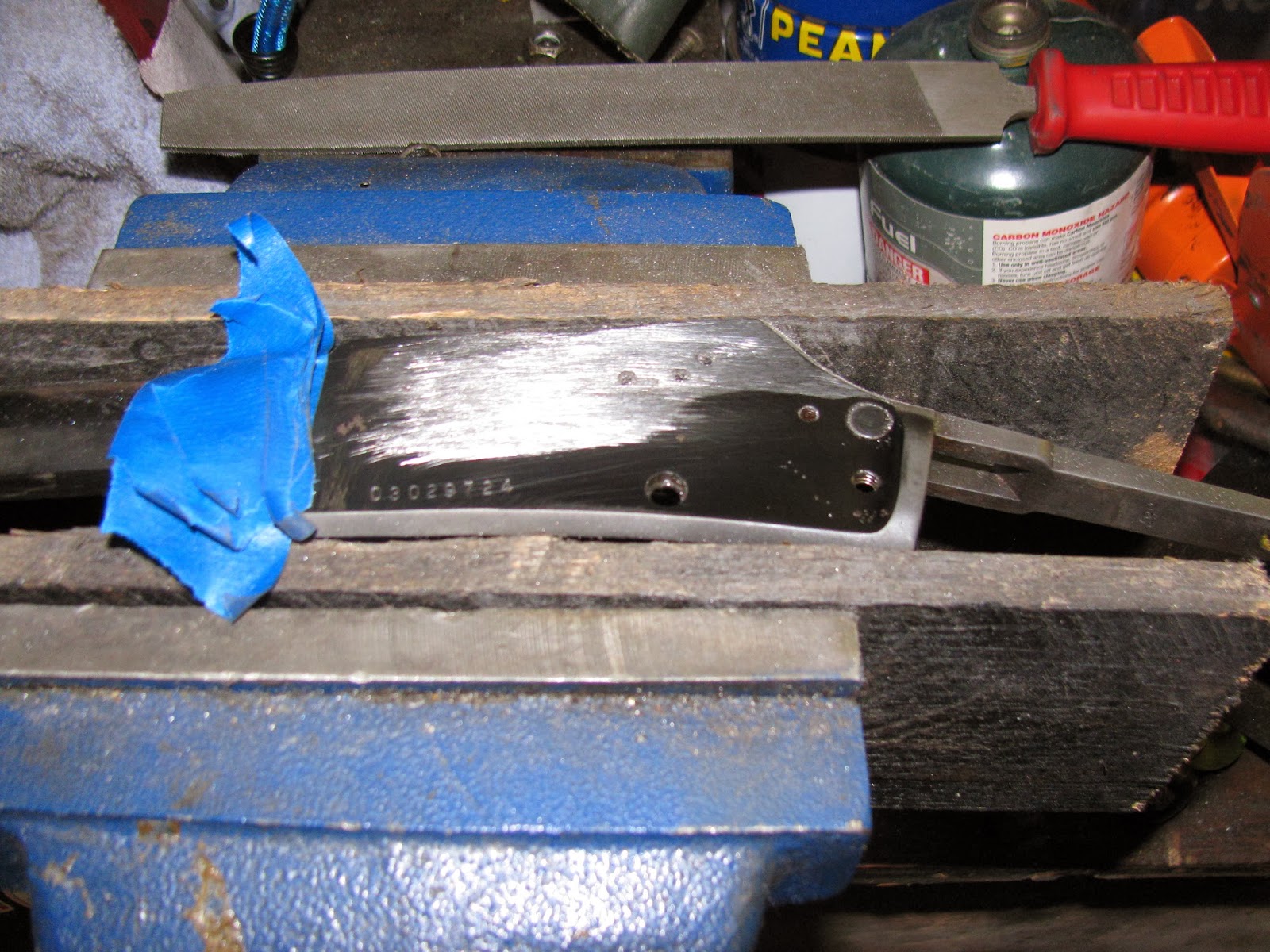 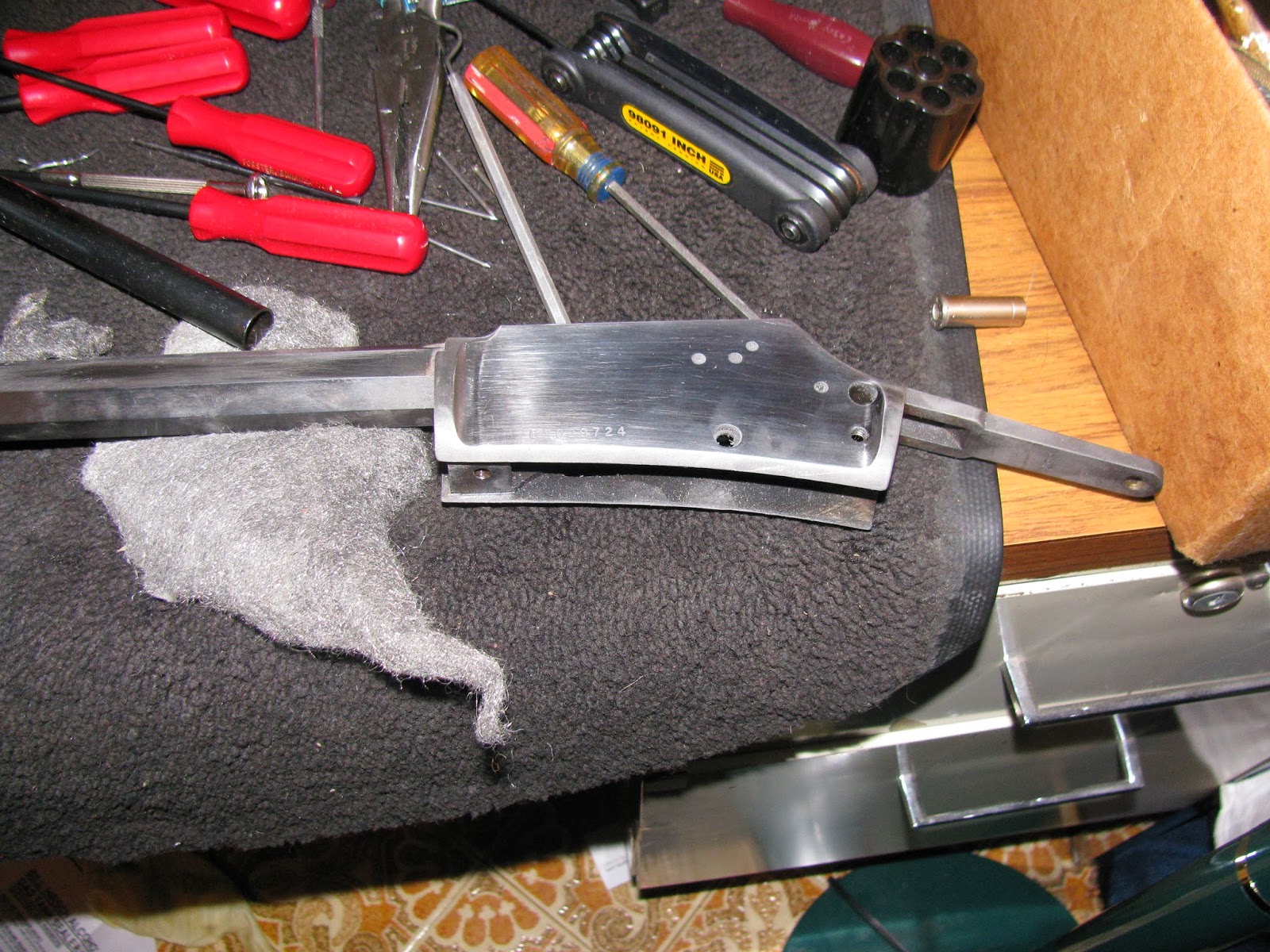 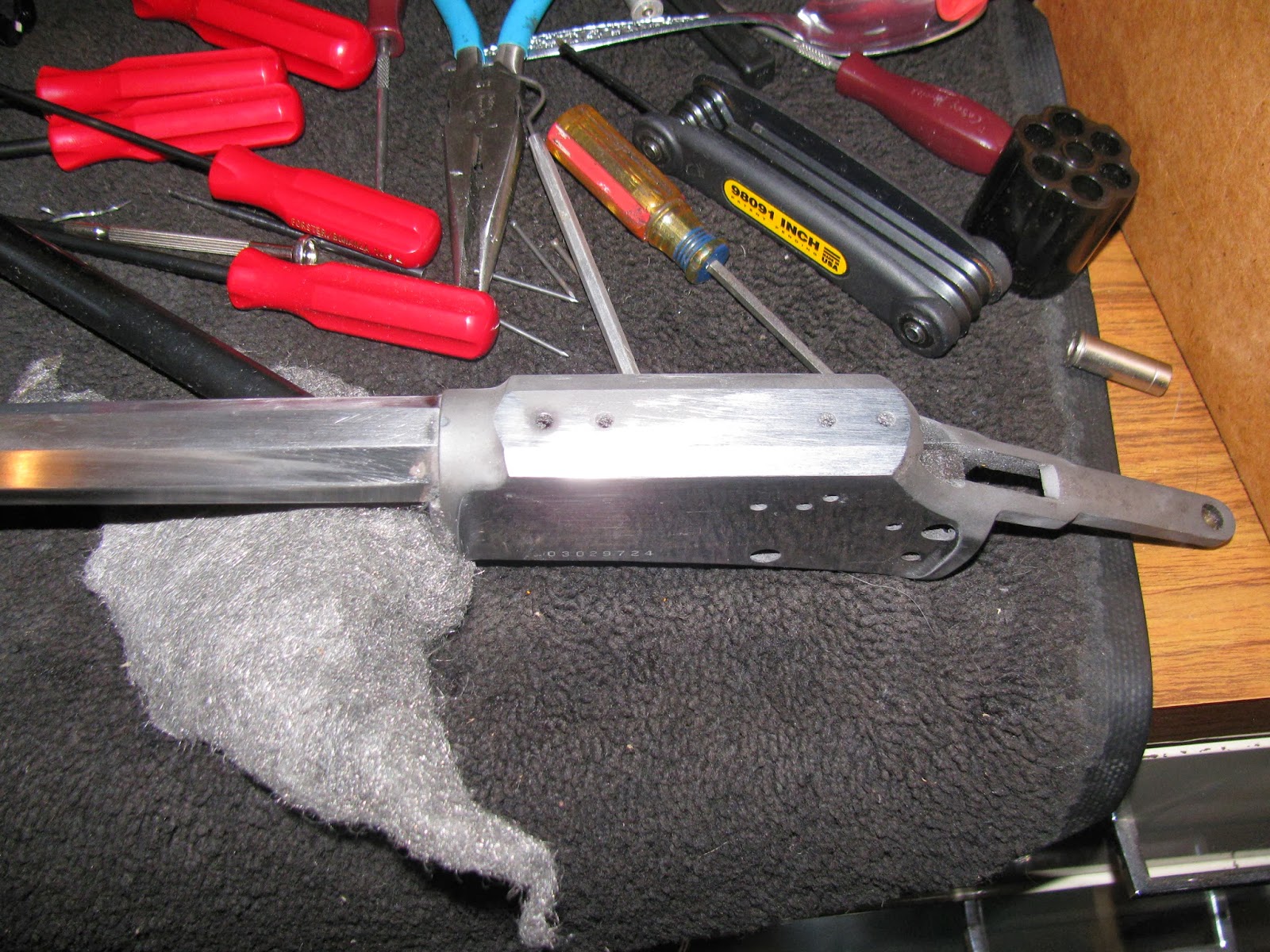 When it was ready I mixed up the chemicals (2 to one ratio) 10 lbs of lye to 5 lbs of Sodium Nitrate and 1 1/2 gallons of distilled water. 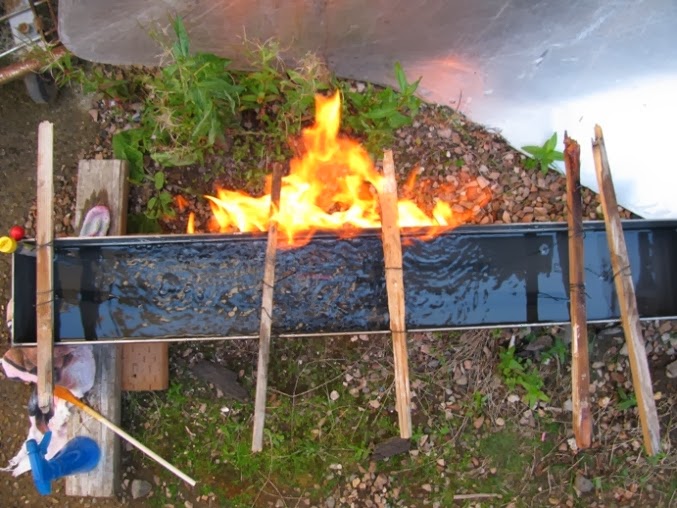 The parts are suspended from the sticks with steel wire, I didn't want the parts sitting on the bottom, I did not want them to get too hot.

When I pulled the parts out I rinsed them off and took them to the tub to finish rinsing them off, I discovered a rusty/ashy/black soot covering the metal. I had been warned that this sometimes happens. 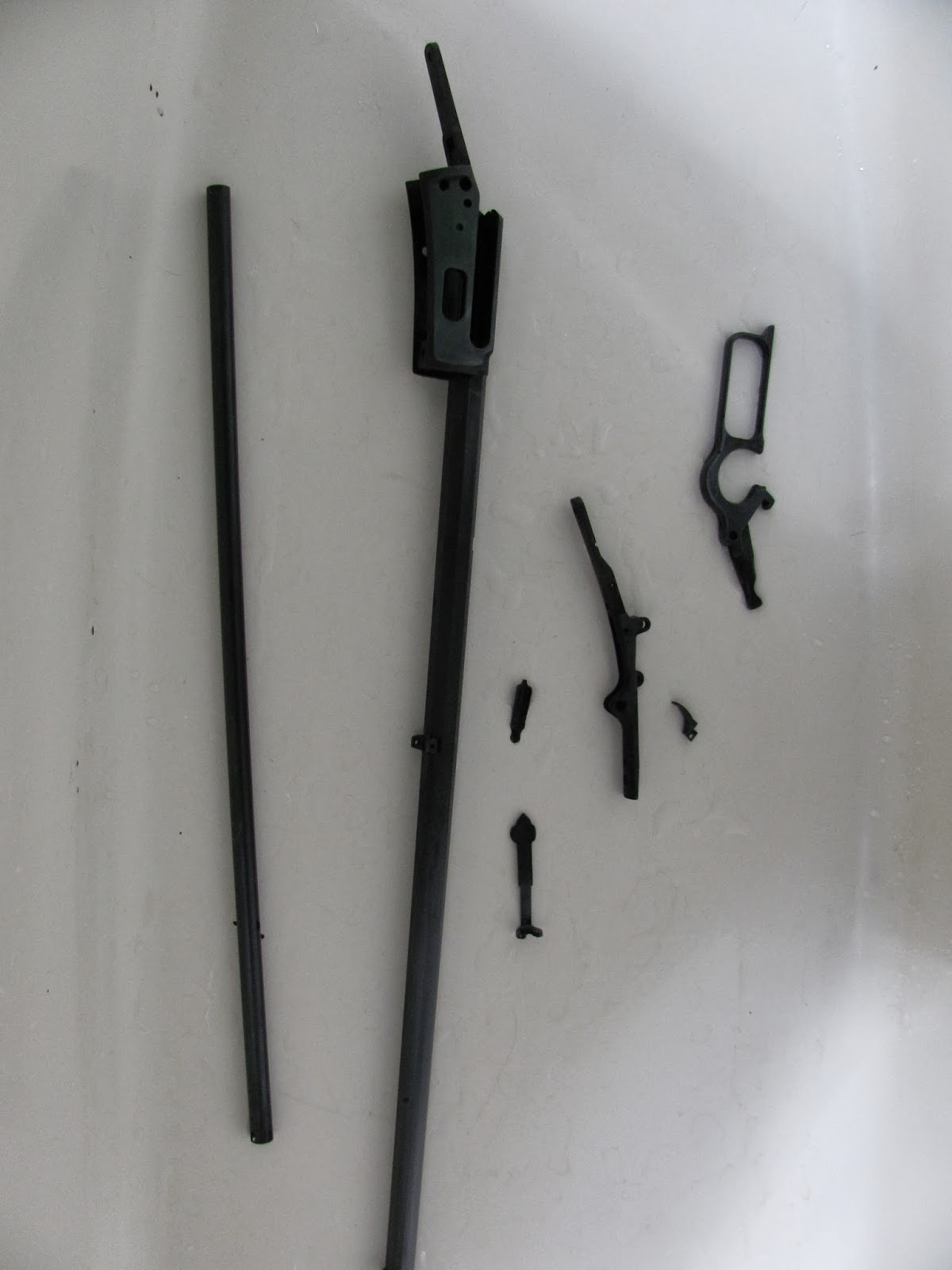 After some WD-40 and 0000 steel wool, the parts looked like new, perhaps better than new!

Here are the finished pictures along with some before/after comparison shots. 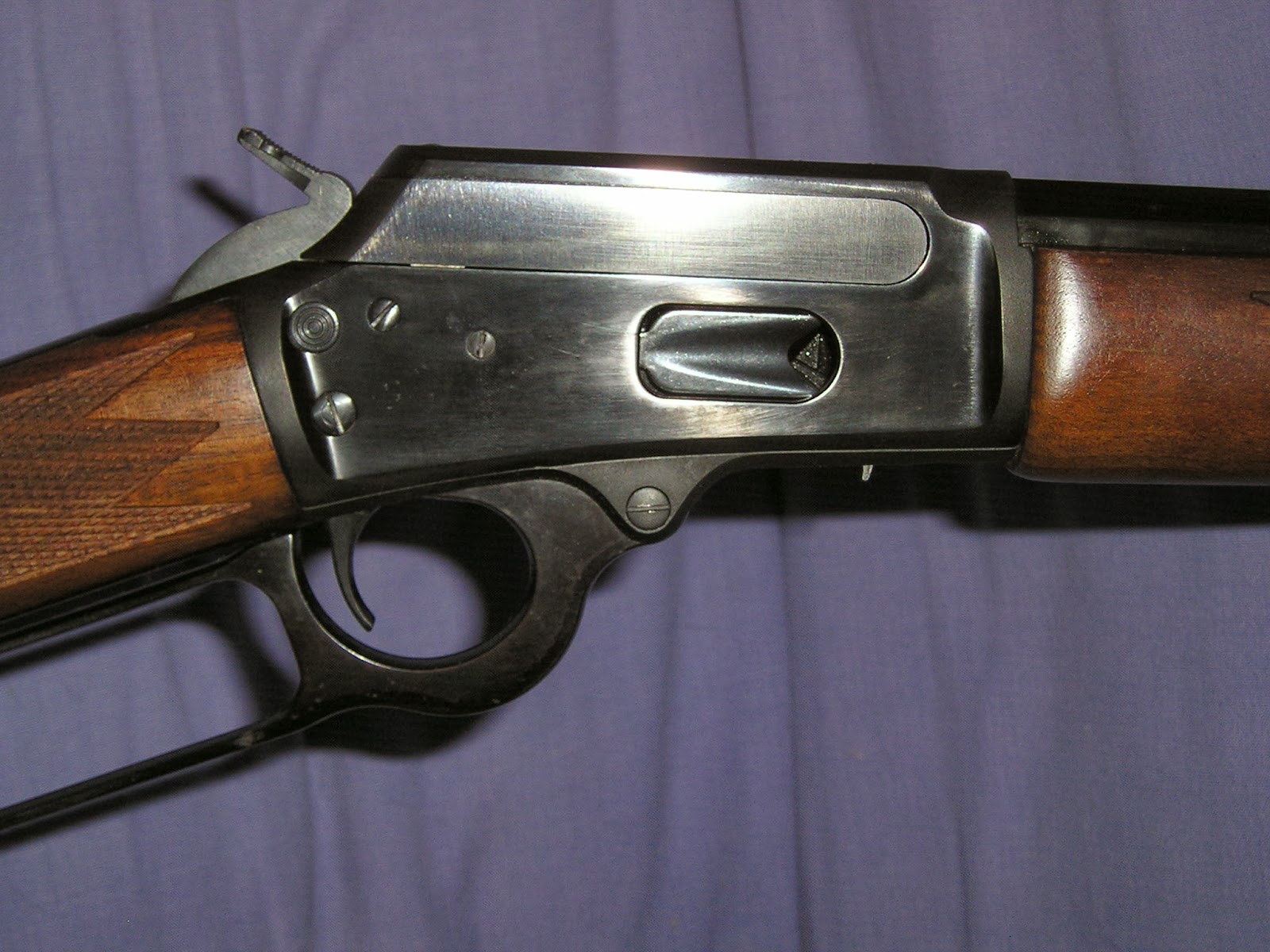 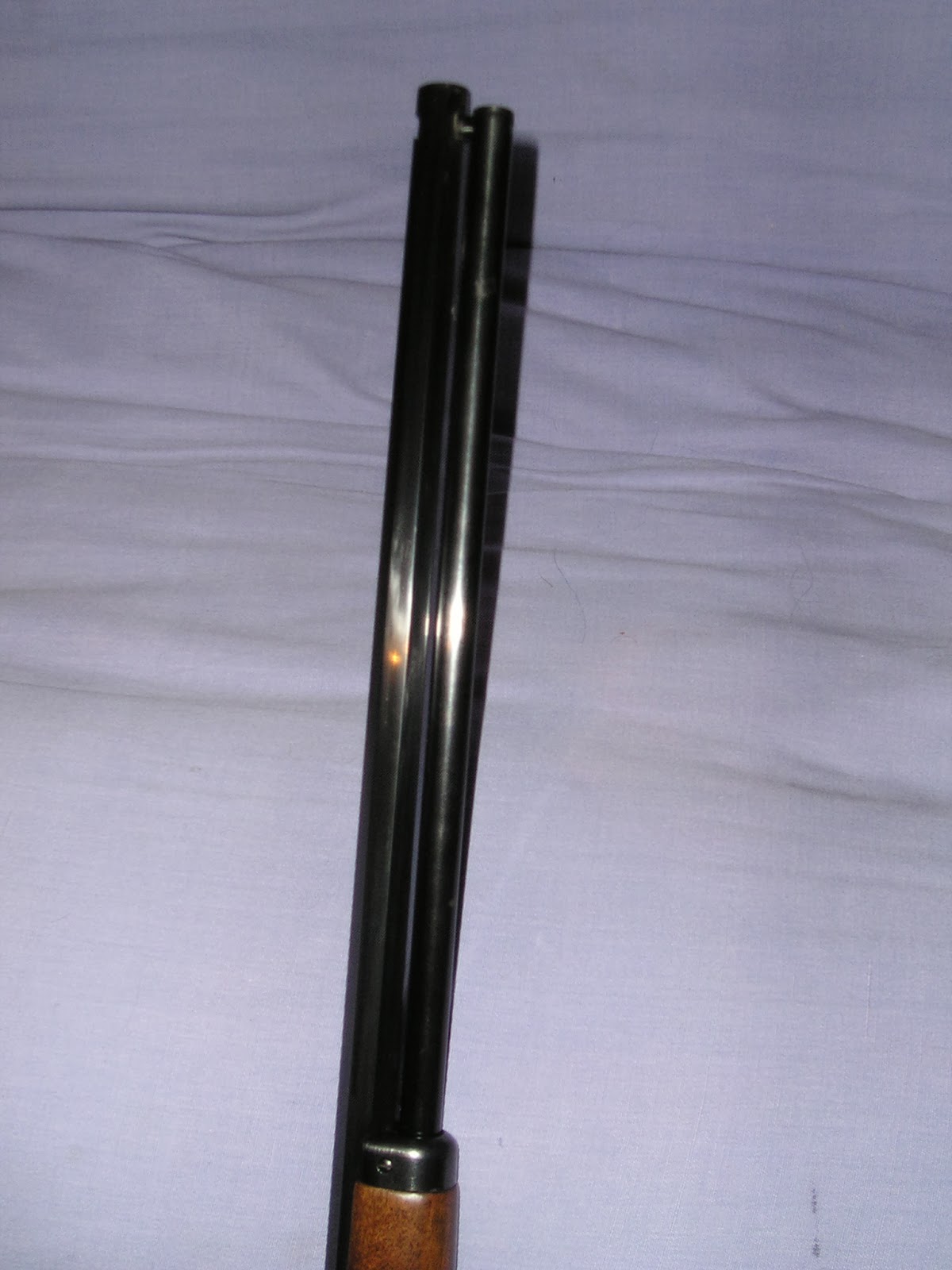 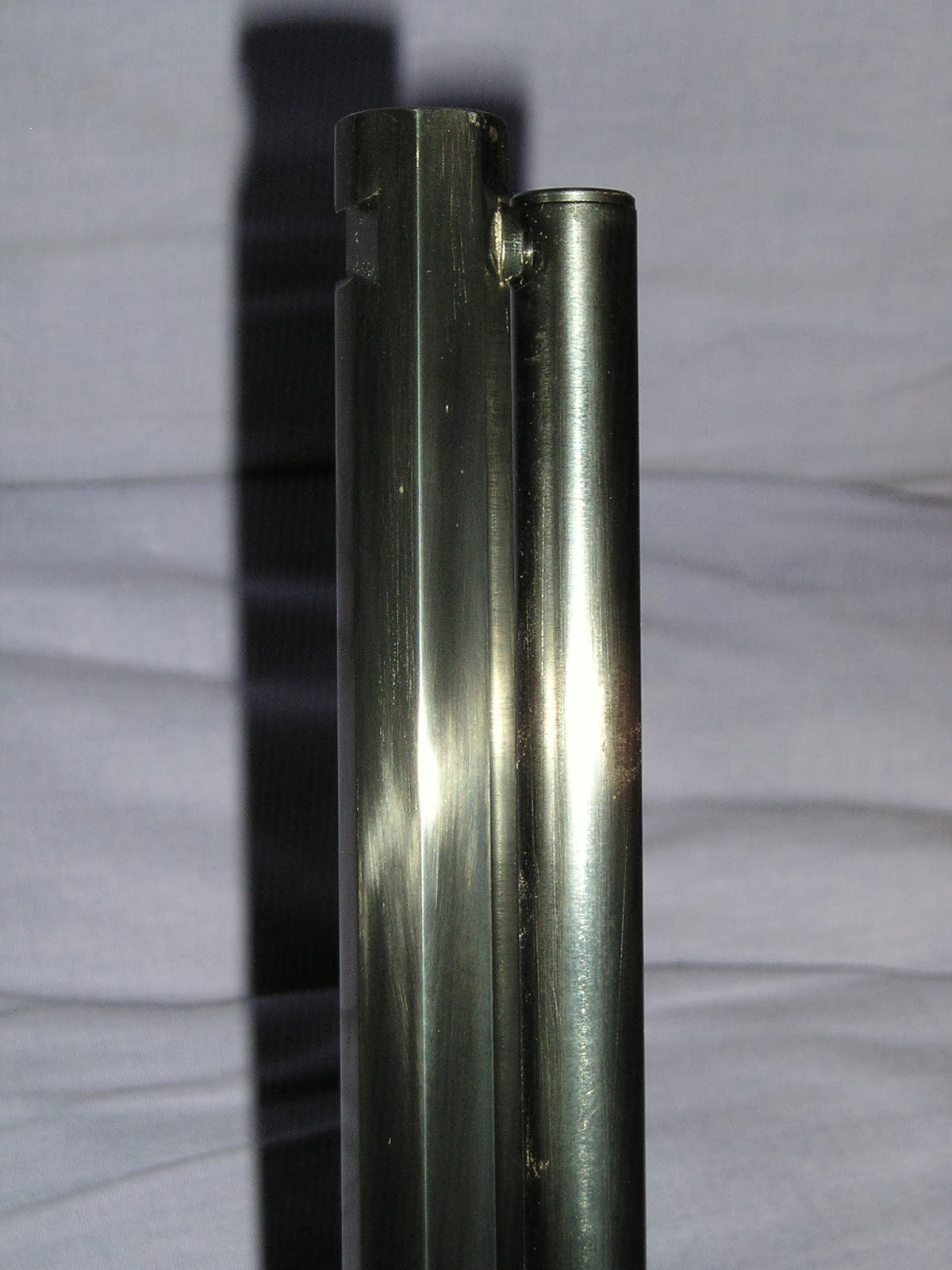 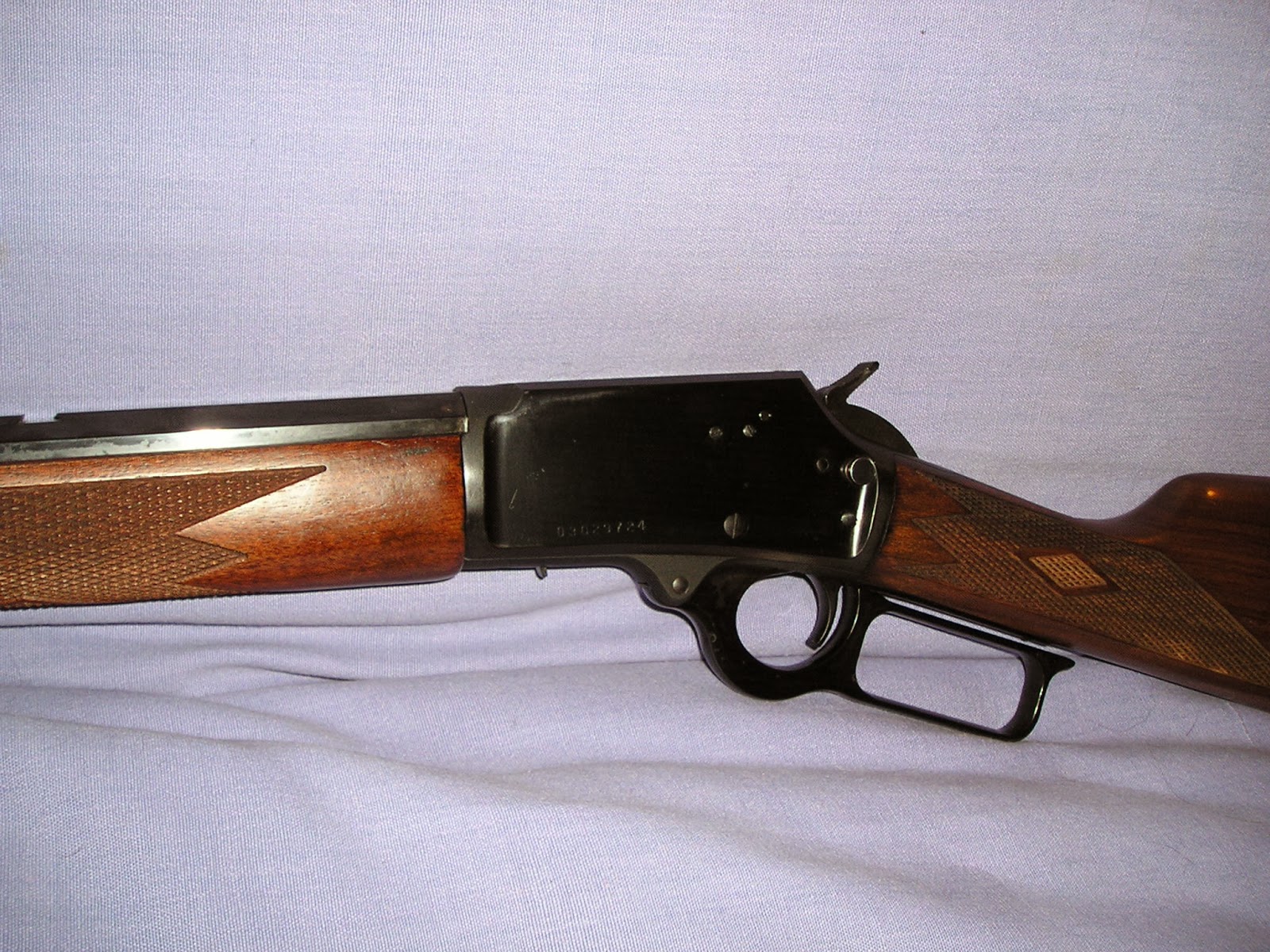 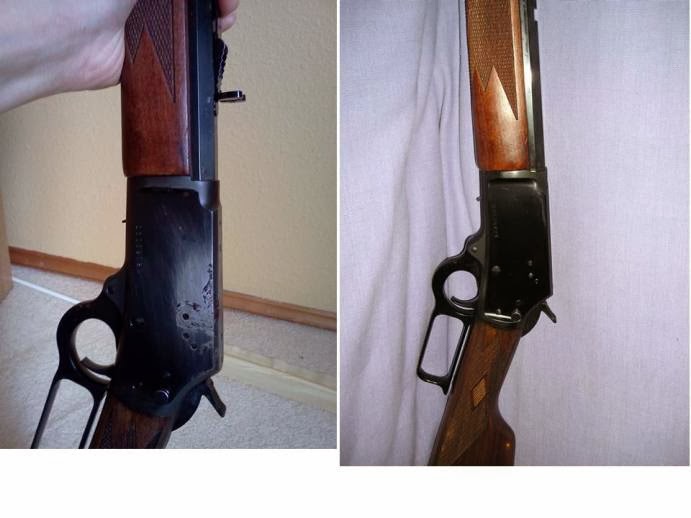 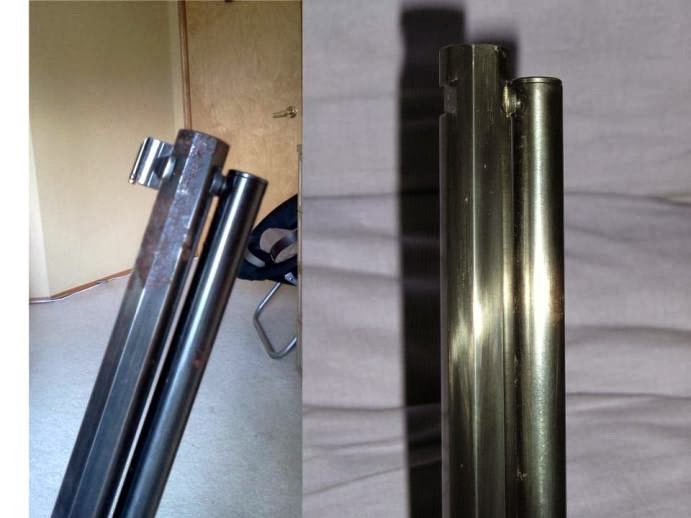 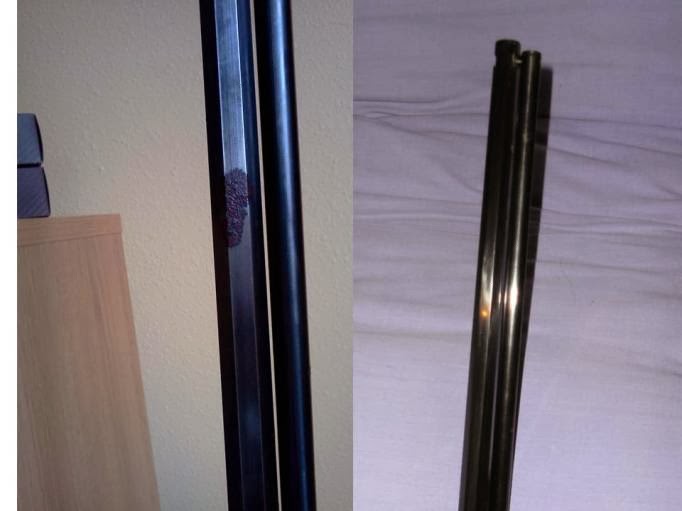 That was it, I had found the right way to reblue guns, the owner was elated, with the pictures of the results and testimony from the owner I had no shortage of people that wanted their guns reblued.
Posted by Case at 8:58 PM