Happy "buy your girl a gun day".....rather than buy her over-priced flowers that will die or chocolates that will make her fat, buy her a gun that will protect her.

The story of the Burnside Rifle Company begins with the man who founded the company and designed the rifle which it is known for: Ambrose Everett Burnside. 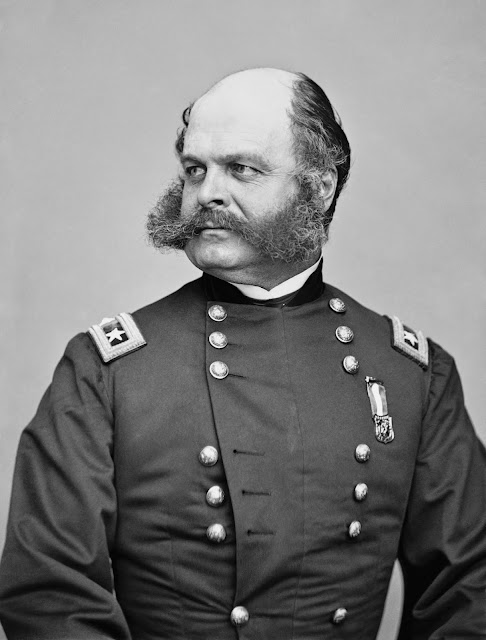 A.E. Burnside was born on May 23rd 1824 in the town of Liberty Indiana. His story has a few twists and turns and is quite interesting.

...and yes in case you were wondering the term "side burns" is indeed named after Burnside. Somewhere along the line the words got reversed.

After his schooling Burnside was apprenticed to a tailor, that business didn't suit him (pardon the pun) and he sought to attend West Point Military Academy.

It was during this time that he fell in love with a woman named Charlotte "Lottie" Moon, who left him at the alter after answering "no siree Bob" when asked if she took this man in marriage.

Lottie, her sister and mother were later arrested by Burnside himself for espionage, they had acted as spies for the Confederacy, but we are getting ahead of the story.

After receiving his commission he served in Veracruz Mexico at the tail end of the Mexican-American War (post-hostilities), he then served out west in California, Nevada and New Mexico. It was during this time, 1849, that Burnside was wounded in the neck by an Apache's arrow. He was apparently unable to reload his muzzle loading rifle fast enough while on horseback. This led him down the path of developing a breech loading rifle that would be faster to reload.

In 1852 he was stationed at Fort Adams in Newport Rhode Island. It was here that he fell in love again and was married to Mary Richmond Bishop, a Rhode Island native.

It was also during his stay in Rhode Island that he came up with a new design for a breech loading rifle.

There was a problem with several breech loading rifles of the time, it was how to seal the breech when the rifle was fired. Many designs allowed the gases to escape the chamber, resulting in numerous issues.

Ambrose invented a system that used a unique paper and brass cartridge, yet still required a percussion cap for ignition. The pleased the US Military top brass as many of them feared a cartridge that had both the gun powder and an ignition system integrated together. Something which we now take for granted.

He used his military contacts to have some samples of his rifle built at the Springfield Armory. 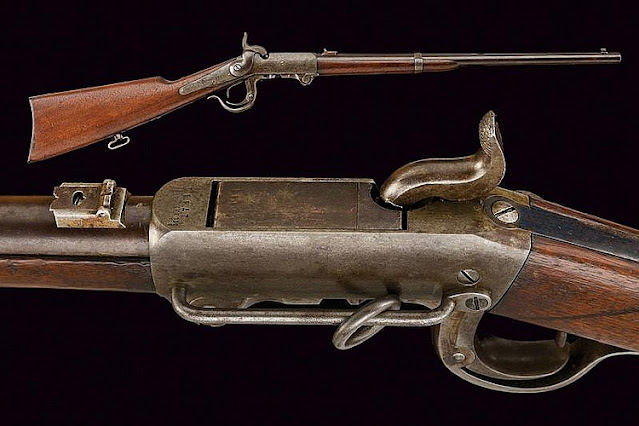 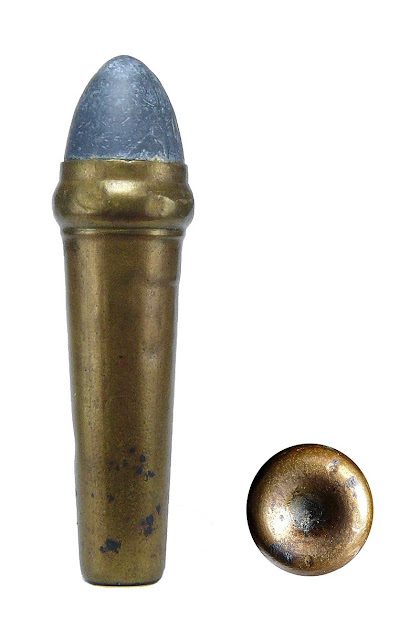 Convinced that he was on to something big, Ambrose resigned his commission in October of 1853 and worked on getting government contracts for his rifle.

He purchased a shop near the shores of Bristol Harbor, south of Providence, on a street that would later renamed Burnside Street. He named the company The Bristol Arms Works.

In 1855 Burnside applied for and was awarded a patent for his carbine the following year. 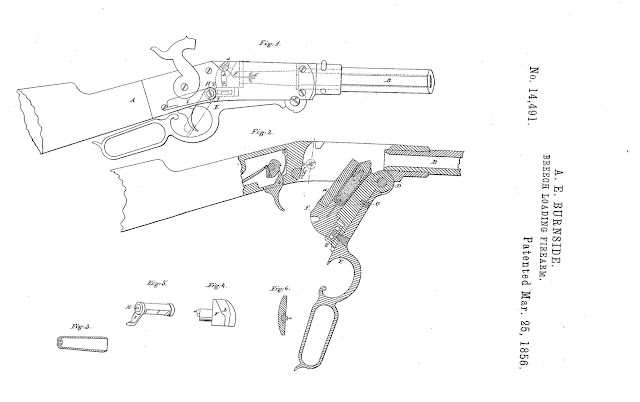 In 1857 his carbine entered a government trials at West Point, The Burnside beat out 17 other competitors. On September 30th, the Ordnance Board recommended the Burnside for Military Service. He did get a contract for 200 carbines, but it took him a long time to fill the order.

A contract for 1000 Carbines was initiated, but Burnside felt he could not meet the deadline for production.

I had read that a fire at the rifle works helped end his days in the gun business.

He assigned (or sold) his patents to some of the gun works employees, who after getting financing in order, rebuilt the factory and named the re-organized company as The Burnside Rifle Company.

Then Republican Abraham Lincoln was elected and the Democrats  started what would become the deadliest war in U.S. history.

Burnside returned to Military duty as a Colonel in the Rhode Island First Volunteer Infantry Regiment.

During the Civil War Burnside was eventually promoted to General of the Potomac.

Back in Bristol the work on improving the carbine had been underway by a man named George Foster Pratt. He kept improving the rifle while others at the company were securing contracts to supply Union soldiers with the Burnside. 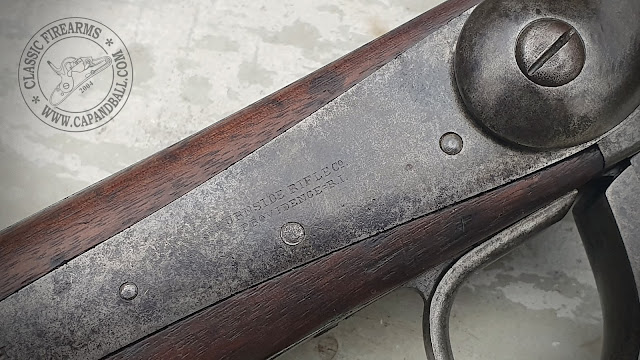 In 1866 Burnside was elected as Governor of Rhode Island, he was elected two more times, serving three one-year terms.

Along with running a few veteran organization, he was one of the founding members of the National Rifle Association and in 1871 was elected the first president of the association.

In 1874 Burnside was elected to represent Rhode Island in the United States Senate, he served as Senator until his death in 1881

1853 - Burnside resigns his commission to focus on building his rifle

1857 - The Burnside carbine wins a competition at West Point

1865 - Burnside Rifle Company gets an order for Spencer Carbines

1876 - Burnside is sent to D.C. as the Commander of the New England Battalion of the Centennial Legion, a ceremonial duty to celebrate the Centennial of the Declaration of Independence

Besides his last name being upended and used as a description for the fanciful facial follicles he was famous for sporting, Burnside's rifle factory did survive.

During the time the Burnside and Spencer Carbines were being built in Bristol, a block away, on the water were some boat builders named Herreshoff & Stone., this picture, taken in 1866 shows the old rifle factory in the background, it appears the Herreshoff's were already renting or owned the building at this time. Note what looks like a chimney is a Cupola on the roof of the rifle works. Some 12 years after this picture was taken the two sons of Herreshoff started a new boat building business 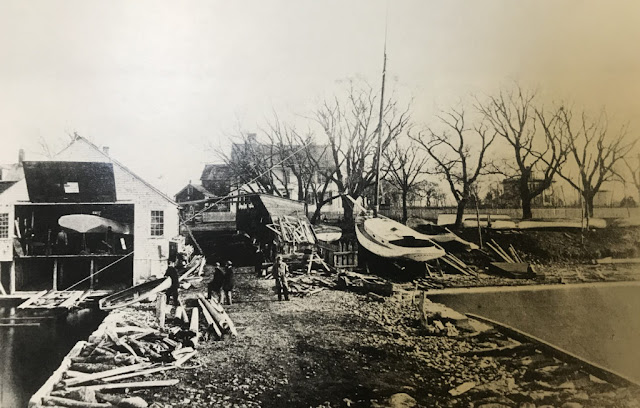 The old rifle co building in 1882, again note the cupola 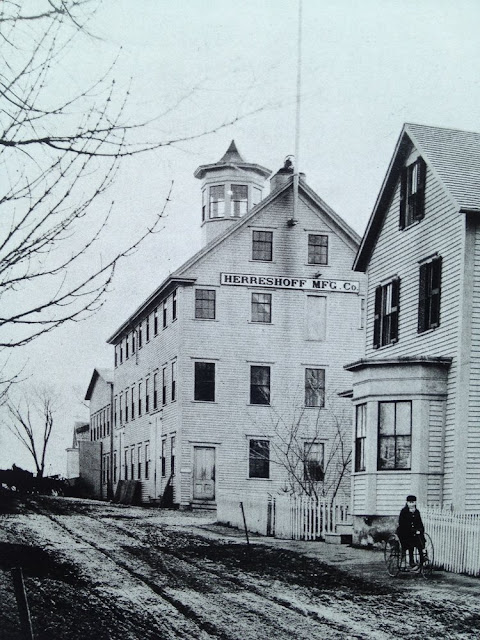 The company thrived and went on to build the boats that won the America's Cup eight times. Today the campus is a museum.

Thanks to the efforts of a great many people, the building still stands at 22/26 Burnside Street in Bristol, RI 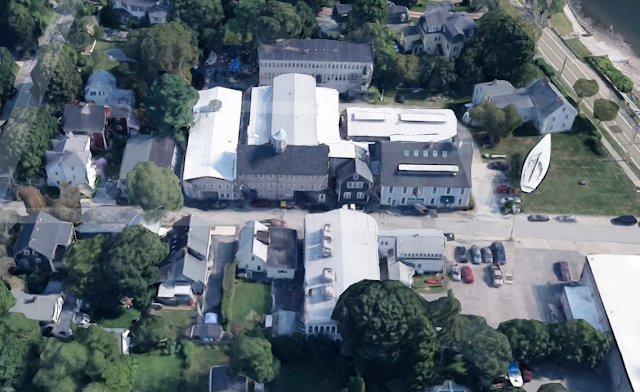 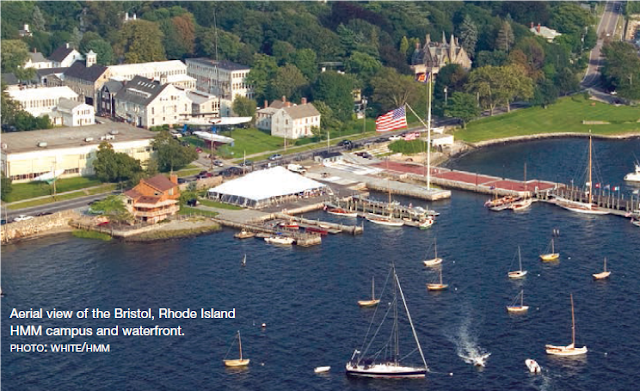